J.J. Rawling To Preach The Gospel Of Ndc Under President John Dramani Mahama 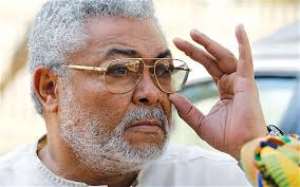 It is irrefutable that former Flight Lieutenant Jerry John Rawlings, founder of the National Democratic Congress (NDC), is a living legend and the true patriot of our beloved nation, Ghana.

The legendary Rawlings grew to be loved and cherished in all corners of the country. However, his good intentions, his mission to rescue Ghana from the claws of the lion, did not initially gain traction due to the uncharitable political mood at the time. That vile atmosphere was characterized by bigotry and Machiavellianism until his party (NDC) went to opposition in 2001.

The gospel of true love for our country, what he so gallantly preached, came to be understood and valued when the then-ruling New Patriotic Party (NPP) proved itself incompetent and corrupt. They failed to deliver in terms of policy and plugged the country’s resources into their personal pockets.

Battling tough seasoned enemies, Rawlings and the NDC finally wrestled their way to power in 2009. When the NDC ascended to the seat of government seeking to implement a better Ghana agenda, the party was led by late President (Professor) John Atta Miles. In 2012 he was succeeded by our current President, John Mahama.

Rawlings again provided guidance concerning creation of a strong country in a healthy environment by constructively critiquing the NDC government.

Eager to maximize his effectiveness as a leader in the best interests of the country, Mahama received that input in good faith. He has now received international recognition and accolades for fighting corruption, creating a transparent and accountable government, and putting Ghana’s economy on the right path.

While the government cannot, of course, be immune to criticism, the opposition has sought to discredit the administration no matter how much it achieves.

That is why I was so pleased to hear that Rawlings had paid a surprise visit to the President and Vice President at the Flagstaff House.

Though the numerous issues facing the nation could never be resolved within four years, the evidence is clear that the Mahama-led government has made immense strides with respect to infrastructure, schools, hospitals, industries, social intervention programs, and other key areas. No one can affirm the reality of this progress better than the truest Ghanaian patriot—the legendary Rawlings.

It would be greatly appreciated and represent an indelible mark of political maturity and nationalism on our founder’s part were he to lead a special team. This team would inform our countrymen throughout Ghana about the good work of President Mahama and the NDC and stress how critical it is for the party to retain power.

It is my hope that our founder and the father of an aspiring MP for Korley Klortey, Hon. Dr. Zenator Rawlings, will lead his party in the fight for re-election—for his love of country, for his love of party, and for the love of his daughter.