Nana Konadu Agyemang Rawlings Should Stop Tarnishing Her Own Reputation 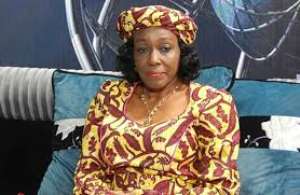 My attention has been drawn to a video recording going round the social media by the respected formal first Lady of Ghana, Nana Konadu Agyemang Rawlings making a rhetorical comment on happenings in our beloved country, Ghana.

The truth of the matter is that, Nana Konadu’s criticism is not factual and constructive. It is the same usual political antithesis which is unhealthy for our contemporary political dispensation.

The irony of the issue is that the same Nana Konadu who sees everything wrong with NDC government, she and her NDP wrote to the NDC in 2015 begging for alliance while she knew that the NDC government was incompetent?

Why should Nana Konadu allowed the seed of her womb be vying for parliamentary seat on the ticket of a party she called incompetent while her competent NDP is canvassing for members?

Nana Konadu knowing that electricity creates livelihood, she should have told Ghanaians what she did in that respect when she was the first lady for almost 20 years

I wish to set the record straight and let the formal first lady, Nana Konadu Agyemang -Rawlings who I respected so much know that if there was no mistake, there will be no correction. And it was the mistake of the pass leaders that has created the “dumsor” that she talks about and it took a working President John Mahama to have that corrected.

J.J. Rawlings had added some megawatts to the national grid by creating the Kpong dam and the first lady at the time who is now claiming to have had all the answers to “dumsor” had added no megawatts.

I will therefore beg my rising and shining star, Dr. Zenator Rawlings to lecture Nana Konadu on the Rural Electrification Program that was initiated by the incumbent government and has not been affected by the recent electricity meter problems.

It has also gone in to our national record that President John Mahama’s three years in office has extended electricity to towns, cities and villages than any other government.

In 2015, President John Dramani Mahama ordered the Electricity Company of Ghana (ECG) to reimburse its customers that had been over charged and the ECG obliged.

In the current faulty electricity meter problem that Nana Konadu talked about, the listening President has heard the cries of his citizenry in that respect and had acted by setting up a cabinet task force to probe into the matter for further action.

As if the above were not enough, President Mahama has been the professor of correction who have corrected most of the mistakes of the pass leaders. His corrections have brought to life Komanda sugar factories, Kumasi shoe factories that Nana Konadu mention in the video.

It took a working President John Mahama to bring back to life, the Tema Oil Refineries (TOR), the creation of the Atuabo Gas factory, Elmina fish processing Industry and many more.

If these are what Nana Konadu is referring to as incompetent, then I pray that God give Ghana more of these type of incompetent government.

We the good people of Ghana are solidly behind the good job the President is doing and to let the President know that we have been eating groundnut with him and he should not mix it with roasted corn.

In as much as I salute the desire and the courage of Nana Konadu to control the administrative wheel of Ghana, distortion of facts by means of parallel arrangement of events should not be part of her politics. She is the wife of the founder of the NDC and I love her and will continue to love her.