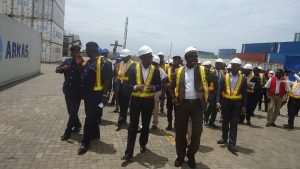 By Inusa Musah
The Ghana Ports and Harbours Authority (GPHA) has sourced for $127 million funding from the Canadian Government to construct a new devanning terminal at Kpone, in the Kpone-Katamanso District.

On daily basis, the Golden Jubilee Terminal (GJT), located a few meters away from the western gate of the main harbour, is heavily congested with human traffic, therefore, the construction of the new terminal, when completed, would see the large human traffic moving to the facility.

The coming onboard of the new Kpone devanning terminal, among other massive infrastructural developments the seaport is seeing under the directorship of Richard Anamoo, who is the Director-General of the GPHA Tema Port, has fast made the port become the heartbeat of Ghana's economy.

Devanning, also called unstuffing of container, is a process in which a landed container is opened in the presence of Customs and all the contents taken out, and the devanning yard is the space where the devanning is done. Currently, the Port Authority has two major devanning yards at the Port of Tema namely the Depot 10 Terminal '1' and the GJT.

The GJT, which was commissioned in 2008, sits on some 20-acre land space spanning an area of 97,412 square meters, and it comprises a container freight station, a state warehouse, car park and an open area for unstuffing and storage of containers, banking, customs and security services.

Mr. Richard Anamoo, who hosted Mr. Fifi Kwetey, Minister for Transport at the Tema Port on a familiarization visit to the port and other facilities, said due to the increasing nature of import, coupled with the impending port expansion, the Port Authority, is increasing its space for unstuffing of containers for a larger space.

“It is in this vain that the GPHA has signed a commercial contract for the development of the Kpone Devanning Terminal project with a consortium led by the Canadian Commercial Corporation.”

He said the Kpone Devanning Terminal will sit on a land space of about 40 acres, twice the size of GJT. “It will have all the facilities currently at the GJT.”

Mr. Fifi Kwetey was later toured the new reefer terminal, and expressing his delight at the immense contribution the GPHA is playing to boost the economy of Ghana, the Minister promised his outfit's fullest support to the Port in its operations.