Trump, The Genius of Napoleon, The Power Of Imagination, And Ted Cruz's Last Chance 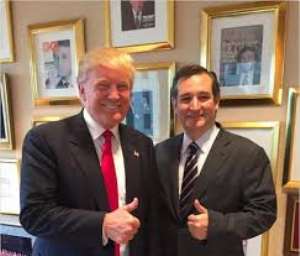 A number of extremely bright commentators have been busily pointing out how Ted Cruz could find his way to 1237 delegates and the nomination. Or earn more, or nearly as many, delegates than Donald Trump and contest his way to the nomination, perhaps with Kasich as his VP nominee.

Or how the Convention could deadlock and be brokered to deliver the nomination to … just about anyone. In which case, as Trump demurely has pointed out : “I think you’d have riots.” (Unless, of course, Cleveland delivered the nomination to Ivanka Trump, clearly well qualified to be president and turning of Constitutional age comfortably a week before the general election. Ivanka would be a One Woman Unity ticket.)

The pundits’ analyses are correct as far as they go. That said they are missing a key point. They are missing the key point that has propelled Trump to dominance. The Washington Post‘s Dan Balz reported recently , “As one former member of Obama’s campaign team put it, ‘I feel like in some ways my brain has to think differently than it ever has.’"

Politico recently published a piece by Daniel Lippman, Darren Samuelsohn and Isaac Arnsdorf headlined Trump’s Week of Errors, Exaggerations, and Flat-out Falsehoods . It is a misplaced analytic. Politico applies the rules of debate — argument — to the genre of Narrative. By the rules of argument Trump fouled out. But Narrative allows for dramatic license.

America was created with the Declaration (a subset of Narrative), not the Explanation, of Independence. As the old saying goes, nobody ever argued anybody into falling in love with them. Narrative appeals to the imagination and, thus, has unsurpassed power to move people.

Trump somewhat resembles Napoleon… in a 21st century context where mass media has replaced armies for political leverage. Napoleon, too, understood Narrative. While leading his army over the Alps — a logistically dangerous and daunting process — to invade Italy, Napoleon, according to the John Abbott biography:

Trump set out to fire the imagination of the rank-and file Americans. He succeeded, at least with a dominant plurality. Cruz set out to persuade the conservative base, a weaker lever on a smaller subset. Cruz surely planned to grow his support from that base. Yet this left a populist populace an uncontested happy hunting ground for Trump.

As my professional colleague Maggie Gallagher writes “Can Cruz hone a message that lifts us above that spiral? It cannot be about Ted or about Trump. It has to be about America.”

The Cruz campaign is a politically sophisticated one. Had Hurricane Trump not unexpectedly blown in, upsetting the conventional calculus, Cruz likely by now would be nominee or frontrunner. Notwithstanding Trump, had Marco Rubio and other conservative aspirants wholeheartedly united behind Cruz, Cruz likely would be the frontrunner now. Not a bad campaign strategy.

Yet the GOP, and American politics, has entered uncharted waters. The waters are roiled by Hurricane Trump.

In theory Cruz might still have time to fashion and deploy a Narrative that could enable him to gain the Big Mo. The right Narrative can change a campaign dynamic on a dime. Will he?

Right now Trump controls the Narrative. He has cast himself as the candidate of prosperity, economic justice, and champion of the little guy.

Cruz would need to write a Narrative recasting himself as the true candidate of prosperity, one who wisely has mined the authentic Kemp-Reagan economic policy ore and brought forth the very best across-the-board growth plan. Bonus, Cruz’s flat tax plan, unlike Trump’s tax plan, is scored by the nonpartisan Tax Foundation as almost deficit neutral.

As the Washington Post’s Jim Tankersley recently observed : “Ted Cruz is running a 'rising tide lifts all board economic message straight out of the Arthur Laffer playbook , including an aggressive tax plan that would slash income tax rates…."

Cruz, as well, has reached into the playbook of Rep. Jack Kemp, prime sponsor of the Gold Standard Act of 1984, telling Rick Santelli last October that “We need sound money. And I think the Fed should get out of the business of trying to juice our economy and simply be focused on sound money and monetary stability, ideally tied to gold.”

This is a dramatic proposal from which a strong Narrative could be spun. Cruz has referenced it too few times on the campaign trail to make it propel him. He has not made the gold standard, or even sound money, a signature issue.

Cruz, authentically and uniquely, is proposing to resurrect the Kemp-Reagan economic policy mix abandoned by George W. Bush (and certainly not restored by Barack Obama). The Kemp-Reagan policy mix, perpetuated by Bill Clinton, generated something like 37 million jobs . Strong stuff if declared and featured.

A rousing fight for lower tax rates without busting the budget, plus good, sound, money, could be the beating heart of a winning Narrative. Trump proclaimed that “I will be the greatest jobs president that God has ever created I tell you that….” No such compelling declarations from the lawyerly Cruz, whose declared platform would make such a claim more credible.

Cruz, reportedly a proficient poker player, could see, raise, and call Trump on his claims, crusading on equitable prosperity. But will he?

Cruz would need to restrain his hunger to explain and steal a page from Trump. Trump trafficks almost exclusively in declarations and in dramatic narrative.

Explanations are for wonks, not voters, and tactically are best used, by a candidate, as a brief but credible counter-move to challenges. Let proxies and outriders deploy explanations as fodder for wonks and pundits like me to chew on.

John F. Kennedy campaigned for the presidency on a pledge to “get America moving again” (out of the doldrums of Ike’s sluggish economy ). Kennedy delivered. He more than doubled America’s average rate of GDP growth from the Eisenhower era. JFK didn’t stupefy the voters with the details as to how. Neither has Trump. To win Cruz quickly must learn to campaign on declarations. (He can counterpunch with -- brief -- explanations.)

Complement the promise of equitable prosperity with a promise of economic justice, even vengeance. We voters want some revenge against the parasites both of the left and the right who are sucking the lifeblood out of the American, and our own, economy. As I previously have written here Trump captures a lot of voter allegiance by implicitly presenting himself as the guy who is going to take out the parasites.

Cruz, who (for better or worse) shut down the federal government, has the credibility to fashion a narrative to outbid Trump on evening this score. To do so Cruz has to go beyond the undifferentiated mass of what he calls the “ Washington Cartel ” and get more specific. Will he?

Last but not least Trump thrillingly has cast himself in the role of champion of the little guy. Can Cruz rip off his grey flannel suit and display himself in spandex, cape flowing in the breeze? Does he have it in him to portray himself as able to leap tall buildings in a single bound? (Trump does.)

Will Cruz project himself as the real champion of Truth, Justice, and the American Way — and the Little Guy who controls the outcome of this election? Does Cruz have it in him to overcome his conservative-lawyer double whammy, enter the phone booth as the ever-so-decent Clark Kent and emerge as Superman?

The window is closing. Donald Trump has captured the popular imagination. Trump has accomplished this through declarations, not explanations. He has built himself Yuuge in the imagination of voters through Narrative, not argumentation. This is Trump’s secret weapon.

I leave it to pundits far smarter than me to crunch the delegate math. All I know is what I learned from Napoleon:Imagination rules the world. Will Ted Cruz get this message?