Casely Hayford: Making the case for an Obinim presidency 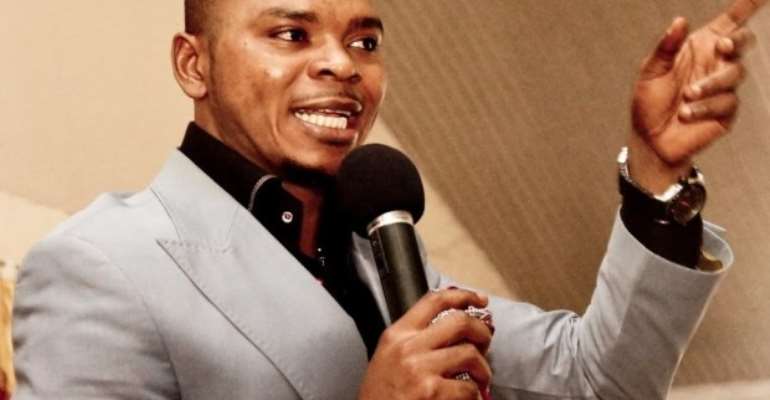 I am impressed that we have so many like-minded persons, prepared to commit their thoughts to paper and say things as they see it.

I am trying very hard not to take too much credit for the various “good governance” CSO’s we have spawned along the way and from OccupyGhana, I say the more of such writers we have the more change we will see in Ghana.

“Necessity is the mother of inventions so goes the saying. Mark Zuckerberg discovered a societal need for self-aggrandizement, narcissism and a world rapidly getting smaller through Internet and social media. He did invent perhaps one of the most successful inventions known to mankind; Facebook. In Ghana, the two most successful moneymaking ventures are politics and “one-man churches.”

Obinim to his credit, acknowledging his deficit in formal education has chosen the latter route. I do not blame him for his choice.

We have become a society of quick fixes and a feeling of entitlement to success. The cold truth is some of us will make it whilst others not so much.

Yet, we have this fierce urgency to seek reasons to our shortcomings amongst other failures.

The desire for quick fixes creates opportunities for charlatans to prey on our souls and the Rev. Dr. Dr. Daniel Obinim is making some lemonade out of lemons. Tiger Obinim is clearly exploiting the Ghanaians who are grappling with fear of death and poverty. It’s ironic how us so called Christians claim the desire to go to heaven to meet our maker yet are so scared to die. We therefore troop to the doorstep of Jesus’ son Obinim in hope of preventing this inevitability.

Obinim is a savvy businessman who has amassed wealth beyond imagination. He sits in a plushy couch, wearing fancy shiny shoes whilst his followers sit on plastic chairs under canopy tents expecting their miracles. This man has done the worst he could do, sleeping with a fellow pastor’s wife, denigrating women with vulgarities, assaulting journalists amongst others. Yet, he’s yet to lose a follower. This guy could get away with murder. Maybe he’s just that charismatic. Who can question he who turns into various creatures from poultry to wild life?

There is this delusion that, the majority of Obinim followers are poor, uneducated women seeking some miracles to address their daily struggles. This is nothing but a fallacy. Obinim has quite a wide range of followers from chiefs to house helps, policemen to thieves and graduates to illiterates. Obinim, with his pyromaniac predilection to raining down fire on his critiques, has managed to hold on tight to his growing empire with success. One part of our world believes in witchcraft more than assessing our own inadequacies. And here we are, all having a nervous break down just because Obinim turned into a tiger. We are nothing but hypocrites. Obinim is nothing but a storm of sperm error and he’s making the best out of a bad hand he was dealt with. What did we expect of him? to carry a bucket of sachet water on the streets of Accra?

Let me digress to where my passion lies most and why I advocate for an Obinim presidency in Ghana. There is a profound disappointment and disgust with the Ghanaian body politic. Wrestling with ourselves, we live in a fairy tale land thinking that, we are torn between two different visions and philosophies between the NPP and NDC, when in actuality, both parties are one and the same. The opposition is just waiting for their turn to pillage the national purse just as the NDC is currently doing. Remember the funny businesses in the NPP days? The selling of well demanded lands for next to nothing amongst party leadership, the kickbacks at the castle?

In late 2014, former US Charlotte (NC) Mayor Patrick Cannon was sentenced to nearly 4 years in federal prison for accepting bribes worth about $50,000. Along this sentence, he was made to pay back the money, pay for government investigative expenses and a fine of $10,000.

Former Detroit mayor, Kwame Kilpatrick was sentenced to 28 years in prison for kickbacks and misuse of city funds. Former Illinois governor Rod Blagojevich was sentenced to 14 years when he “plotted” to sell off Obama’s vacated senate seat. The guy went to prison on his planned intentions.

Former Virginia governor Bob McDonnell is on his way to serve prison time for engaging in a quid pro quo with a businessman. Need I go on?

Now back to the Ghanaian reality.

Woyome is paid over $20 million per judgment debt. Smartys is overpaid hundreds of thousands of dollars to brand buses when vocational students in JHS could do a better job for 10% of this money-wasting act. And our transforming Ghana President kindly requests Woyome, Smartys and others to return these monies.

The fact is Woyome was just one piece of the bigger game plan. Do we honestly believe the judges, lawyers and ministers involved in awarding this huge sum have their hands clean? This was a well-planned scheme to defraud the citizenry; and so far, they’ve succeeded. Former DVLA boss, Justice Amageshie was busted changing the price tag of a contract from $3.6 million to $9.3 million.

Upon questioning by a parliamentary committee, his excuse “to err is human”. I nearly had a heart attack when I heard this. You might ask what happened to this shady character? He’s free enjoying his family and being made chairman at church events. I might sound cynical but in truth, I’m just weary and worried that no one takes such issues with the same fervor we are attacking Obinim. We keep borrowing at exorbitant interest rates without any means of repaying these debts back. My grandkids are already saddled with huge debts even before they are born.

Political leaders are robbing us blind and yet we idly watch and kiss their behinds showering them with praises, “honorable this, honorable that”. There is no moral compass when it comes to our leaders. They are callous. People are literally going to bed on empty stomachs and without any conscience; we award $20 million to one individual over some stupid litigation. “Freedom and Justice”, indeed. Isn’t justice supposed to be blind? But not the Ghanaian one. Ghana justice has more eyes than a five-eyed flying tiger named Obinim.

I am yet to hear a judge order a goat thief to return a stolen goat or Atta Ayi to return his robbed loot and go Scot-free. The yahoos following Obinim are no different from those at campaign rallies. We criticize Obinim’s followers for sheepily complying with his dictates yet followers of these politicians continuously lose their lives defending some greedy politician and their cronies.

I yearn for the day when Ghanaians of all stripes, religion, ethnicities and political affiliation would speak truth to power. A day when we are all acknowledged that, we have a stake in this young democracy.

The day when the thieves stealing millions will be hanged and goat thieves given second chances. Kayayoos are taxed on a daily basis for their hard earned money only for these monies to be handed over to some few individuals. How do we justify this as a society?

The difference between Obinim and these political guys is this; Obinim makes his money through trickery and prophecies. The politicals make theirs through thievery.

Obinim gives orders and his followers get it done. Mahama orders Woyome and the likes to return the monies and it gets ignored. Obinim is charismatic, Mahama is not. Obinim is a J.S.S grad and with what the highly educated has done to us over the years, maybe we need a J.S.S grad. Between these two human tricksters, I endorse Obinim for our new president.

Worst-case scenario, he could turn into an unseen armed robber and rob Woyome in the name of Ghanaians. May God save Ghana.”

There isn’t too much time left for us to rise and shine again. The problem is that many other countries have seen our lethargy and are girded up to step to the plate. Even Cape Verde sef are now Africa football champions.

And to crown it all, we made Uhuru Kenyatta our new President. Did you see the Independence day brochure? Its all over Whatsup.