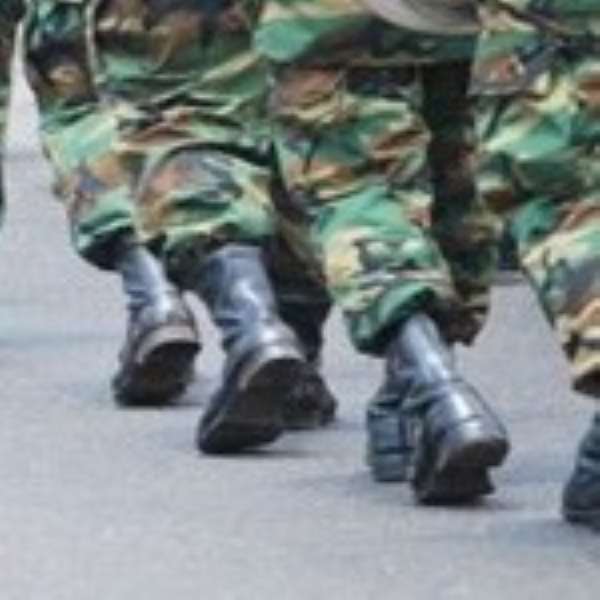 On 23rd December, 2015, 501 Recruits undergoing training at the Army Recruit Training School (ARTS) at Shai Hills in the Greater Accra Region were dismissed and sent home packing.  Colonel E. Aggrey, Director of Public Relations of the Ghana Armed Forces (GAF) in a statement explained that the recruits' behaviour was far reaching and inimical to the security of the state.  From my investigations and official sources, it is confirmed that some members of the recruits protested and demonstrated that the training they were undergoing was too strenuous and considered the training as punishment.  The decision taken by the GAF was swift and justified militarily because the conduct of the recruits is nothing but mutiny and the Authorities must be commended.  Mutiny is a criminal conspiracy among a group of people (typically members of the military or the crew of any ship, even if they are civilians) to openly oppose or refuse to obey orders and try to take control away from the person who commands them.  Mutiny is a very serious offence in the military because it shakes the very foundation of this proud institution.

Whilst commending the Authorities for their action we must not be oblivious of the harm that has been done and critically examine what happened to prevent a recurrence.  No factory can manufacture quality products without quality raw materials and therefore the quality of human resources put at the disposal of the training institution needs to be questioned.  Secondly, how could 501 people within such a short time develop such esprit de corps to pose a challenge to the military command without any fear or inhibitions?  The revelation that they are foot soldiers of the NDC answers it all because firstly, they know each other and therefore communicating among themselves was not difficult. Secondly they are not disciplined as they have demonstrated since NDC came to power and thirdly, they might have been recruited through the “protocol” system and therefore lack the requisite qualifications.

Recruit training is a program of physical and mental training required to convert an individual to become a soldier in the Ghana Army. The basic training is designed to be highly intense and challenging and in all countries, some recruits collapse and die in the course of training.  The challenges come from the difficulty in physical training and the required quick psychological adjustment to an unfamiliar way of life.  The basic training is divided into two parts namely, basic combat training and Individual training.

In basic training, individuals learn about the fundamentals of being a soldier, from combat techniques to the proper way to address a superior whilst the individual training covers rigorous physical training to prepare their bodies and minds for the eventual physical and mental strain of combat situations.  One of the most difficult and essential lessons learned  is SELF-DISCIPLINE, as it introduces prospective soldiers to a strict daily schedule that entails many duties and high expectations for which most civilians are not immediately ready.  For the individual to go through such rigorous training, he must first be committed and demonstrate the willingness to accept the hardships which will enable him or her to undergo the training.  It is not a “job for the boys” but the individual must physically, mentally and psychologically be prepared to undergo the hardship.  Complaints and other forms of protests are not entertained simply because no recruit has the right to demand the type of training he/she should be given.

Constitutionally, GAF is not a conscripted Army and Ghanaians opting to serve, do so on their own volition. The desire to serve does not guarantee admission but rather interest and commitment whilst the GAF reserves the right to select candidates in accordance with its rules, regulations and expectations.  To ensure quality, standardisation and avoid embarrassing situations, GAF has stringent rules and regulations to select prospective service personnel and its selecting committees include experienced psychologists who assess the mental dispositions of interested personnel to avoid recruiting people with mental delusions.

The GAF therefore owes Ghanaians some explanations as to how the stringent selection procedures for recruitment in the Army were compromised to pave the way for the admission of NDC foot soldiers knowing fully well that such an action would politicise the Armed Forces.  I don't want to believe that the military authorities brought this mishap on themselves because if the recruits had been subjected to the normal selection processes not all the 501 personnel would have passed the test and the incident of indiscipline which took place could have been avoided.  This must be a lesson to all active service personnel who allegedly compromise their offices and duties for crumbs from the politicians' table in the form of promotions, postings to lucrative jobs and scholarships for their children's education in local and overseas institutions.

.
From facts available, it could be concluded that the recruitment was done through the “protocol” system. “Protocol” is fundamentally a code of correct conduct or a procedure of getting things done in orderly ways but in Ghanaian parlance it is the indulgence in all kinds of malpractices just to satisfy the whims and caprices of the rich, politicians and powerful people in our society.  Why would anybody attempt to pollute the fibre of such an important state institution like the Ghana Armed Forces?

A lot of admissions into second and tertiary institutions, nursing training institutions, employment into Government institutions and agencies and the most serious of them all recruitment into the security services notably GAF, the Police Service, Ghana Immigration Service, BNI etc  have been made through the “protocol” system.  In admissions into training and academic institutions “protocol” means taking money from undeserving candidates and admitting them whilst neglecting and shamelessly denying intelligent candidates who are poor, admission into the institutions for one's selfish, personal and parochial interest.  The harm such corrupt practice is doing to the training of our human resource as a nation is beyond description and space will not allow me to list them.

It may interest Ghanaians to know that on completion of the training of these recruits, they would have been posted to other units of the Ghana Army where they would have remained as pockets of cancerous cells and only God knows what they would do on receipt of instructions from their sponsors or “God Fathers” and therein lies the threat to national security.  Could anyone also imagine the conduct of such troops deployed to maintain peace during the forthcoming elections which the NDC is trying desperately to win?  Why would a Commanding Officer of an Army training institution, an epitome of discipline, compromise his position by calming down the nerves of recalcitrant recruits? Has he an agenda?

Surprisingly, the policy makers are aware of this cancerous practice (“protocol”) but they are doing nothing about it except mere rhetorics because they are the originators, partakers, beneficiaries and corroborators. The inability of the authorities to curb this ugly menace demonstrates how uncontrollably the moral fibre of our society has been allowed to degenerate whilst the evil deeds continue unabated.  Do Ghanaians want to build a society where mediocrity replaces meritocracy, where nepotism, cronyism and crass corruption become the order of the day?  Today the declining nature of governance, the falling standards in education, the morale decadence, love for riches without hard work etc. which are seriously undermining our national development can largely be attributed to the ''protocol'' system  which enables incompetents to be in charge of our affairs.

My humble advice to my colleagues who are still in service is that you perform your duties in accordance with the Constitution of Ghana, the rules and regulations the GAF has established to guide you in the performance of your duties.  Resist all “protocol” recruitments and subject all future recruitments to the existing rules and regulations.  Do not allow your own integrity to be undermined because you will need it when you retire and always be guided by your oath. Some of us have retired for the past 25years but can hold our heads in high esteem amongst our colleagues in service or retired. Some retired officers entertain fears when visiting the Retired Officers Mess because of their past deeds and I can assure you that there is dignity in honourable service and be guided by the word INTERGRITY. When you join us on retirement, be sure you can look back and be proud of what you left behind.

2016 General elections will pose a security challenge but perform this duty with a high sense of integrity and ensure that Ghana remains calm and one nation after the elections. The Government must muster courage to abolish the practice of “protocol” in admissions and employment to all institutions because Ghanaians are all equal and must be treated fairly at least that is what our Constitution says. “The world suffers a lot not because of the VIOLENCE of bad people but because of the SILENCE of good people.” (Napoleon)

‘Sputnik-V procurement contract must be re-examined’ – Kwaku...
24 minutes ago

Getting Sputnik-V vaccines from black market using middlemen...
24 minutes ago