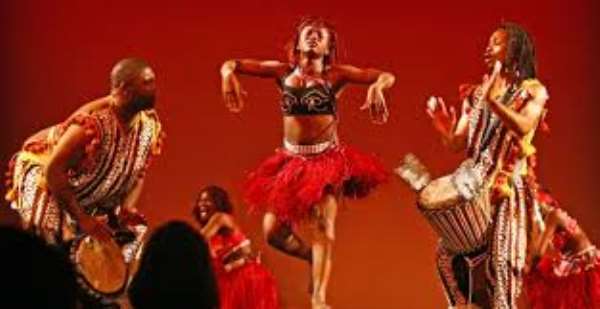 Just because an African creates a dance does not make it African dance. In order to fully comprehend this statement, we need to examine traditional African dance, its definition, significance, and event of causation.

As we know a specific word that defines African dance as movement to music, and music itself, does not exist in a number of African languages. The words ‘dance’, ‘ballet’ and ‘danse’ are all rooted in the language of those who colonized Africa.

The music is based upon the spoken language of the people and includes dance as an inseparable element thereof. Therefore, it is largely percussive in nature. In this manner the musician is able to address the dancer, through drum language, indicating what steps to execute and when to perform them.

The fact that African dance is inseparable from its music, distinguishes it from dance as it is known in the western world. According to the rationale of Akin Euba, traditional music is created in small villages and hamlets and does not travel far from this place.

Following this line of reasoning, when music is taken away from its place of origin, such as being performed on stage, or in a classroom, it is no longer traditional music, but becomes Neo-traditional music.

Euba defines Neo-traditional music as a form that makes use of elements of traditional music but not necessarily in the same social context or ceremony found in the village of creation. Of the five types of music found in Africa, there are only two that are basically African. The other three classifications headed by the words Western, Westernized and Conservatory are derived from the western concept of music and imported into Africa.

It is unfortunate that African music was already separated from dance when Akin Euba defined the types of music found throughout Africa. Nevertheless, traditional African dance, because of its ties to music, would follow the same sequence.

Of them are Professor Albert Mawere Opoku of Ghana, Maurice Sonar Senghor of Senegal, Duro Ladipo of Nigeria, Washa Ng’Wanamashalla of Tanzania, Oba Adetoyese Laoye, I of Nigeria, Abdourahmane Diop, Musical director of Senegal, and Professor J.H.K. Nketia of Ghana.

I followed the concepts introduced by Akin Euba and created “Categories of African Dance”. Consequently, I have defined Traditional African Dance as the oldest and most indigenous form of dance known to Africans.

The dance is inseparable from the music. I also gleaned that the lifetime activities, such as birth, death, initiation, and puberty, have preordained dances that are already established in their society. Dances outside these lifetime activities are based upon an event, happening or activities that the people choose to remember. A sequence of movements are created and affixed to the rhythm of the people.

In other words, traditional African dance is based on reality, not fiction. One of the most illustrative events that led to the creation of an African dance is when members of a marching band first heard the sound of an airplane as it flew over their heads. They looked up and shouted “Gahu”, meaning air machine or airplane. Movement and songs were created and Gahu or Agahu was born.

Subsequently Neo-Traditional dance follows the same explanation defined by Akin Euba. Neo–Traditional dance are those dances that are performed outside the context of social ceremonies. Some examples are folk operas, auditorium performances, classroom and other forms of entertainment. Therefore when you see the performances of national dance companies, such as the Ghana National Dance Ensemble, The National Dance Company of Senegal or the Guinea Ballet, their routines have been altered to fit on the proscenium stage. As these dances are based on an event that the people chose to remember, they are pieces of history reenacted through movement, communicated by the musicians through drum languages and performed by the dancers.

As African dance is an oral tradition, it is transferred between generations by a mouth to ear process. Unfortunately any society that is totally dependent upon oral transmission of its culture is doomed to failure because of the breakdown of the human memory and outside interpretation. Ghana was the first country in West Africa to gain its independence from colonial rule. Ghana established the format of how to include the arts particularly, music and dance, so it would fit into the curriculum of academia. At the University of Ghana Legon all students had to take courses in African studies in order to graduate. Professor Albert Mawere Opoku was called to the campus at Legon not only to teach traditional Ghanaian dances, but also to create a national dance ensemble for Ghana.

Professor Opoku often said that African dance was about people and their culture. He voiced a stern warning that Africans should take care because when these dances were taken out of their place of origin, they would be so attractive to outsiders who would try to replicate them even though they did not speak the language of that particular region.

In doing so the dances would become so adulterated that the only thing recognizable would be the name of the piece, but the music and dance would be distorted. Realizing that Africa could lose her cultural identity he brought a notator to Ghana to teach Labanotation and apply it to the traditional dances of Ghana. This person spent two years in Ghana. This was in the mid-sixties.

Unfortunately when I arrived on the campus years later, to teach how to write dance on the computer as well as how to write African drum music, there was no evidence of these notated scores found on the campus. I chose the dance TOKOE a puberty dance of the GA people. I chose this dance because it was performed routinely in the early seventies, but was not being performed as frequently in the later years. This was done to establish an archive of notated scores of African music and dance.

At this particular point I would like to list the ways African dance differs from other dance forms.

· It is inseparable from its music.

· The music actually dictates to the dancer what movements to perform through drum language.

· It is percussive in nature. Africans do not dance to melodic music.

· African dance is realistic not fantasy as it is based on an occurrence that the people witnessed and chose to remember.

· There are no techniques in African dance, such as Limon, Horton, or Graham.

· Dance in Africa is never performed without some form of musical accompaniment.

Professor Opoku warned us that once the dances are removed from their place of origin, people would try to replicate them. I used to teach dances I had learned in different regions of Africa to other Africans. I did this because I knew they did not have the money to travel to these distant places. I was naïve believing that they would not succumb to the overpowering ecstasy of the dance.

But they did and adulterated the dance. To make matters worst they claimed to have done original research on a certain dance and boasted about it during a Panafest conference. I happen to overhear the person boasting and began to question the person. All of a sudden another person elbowed the boaster cautioning him to ‘keep quiet”.

He remarked ‘look at her face, a little more mature now, but she is the one who taught the dance at the Arts Council. Silence fell over the room. The boaster was not familiar with the names of the drums, nor the main rhythm. Surely if the cultural representative of the country where this dance originated had heard his remarks, he would have been shocked.

African dance is about a people and their culture, and Africans who are outsiders do not have the right to trespass upon the culture of other Africans. Today many Africans are spread throughout the world and the dances of Africa are attractive, the dances and music do not follow the traditional pattern of theory, use or creation.

The drummers can no longer communicate to the dance what steps to perform because the drumming is not based upon a spoken language. It appears that a number of these routines are based upon pure fiction not reality. It is just as Professor Opoku feared that African dance/music would lose it value. I reiterate if this folly continues, it will lead to the ultimate demise of traditional African dance that the ancestors cherished and practiced.

The author has 16 publications published on ModernGhana.

Stiffer sanctions needed to punish persons who engage in tax...
44 minutes ago