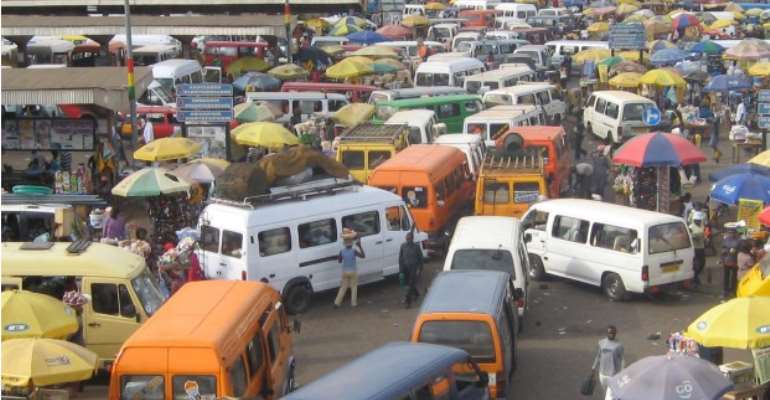 Trotro and taxi drivers in Asakae near Takoradi in the Western Region yesterday embarked on a sit-down strike in protest against the bad roads in the town.

A visit by DAILY GUIDE to the farming community revealed that the untarred and bumpy Asakae road had deep potholes which forced drivers to swing their vehicles across the road in a zig-zag manner any time they ply it.

The drivers therefore refused to ply the deteriorated road yesterday, leaving commuters including school children and workers to walk long distances to school and work.

DAILY GUIDE gathered that the chief of the area at a point had to use his Pick-up to convey some of the commuters, particularly the school children, to their respective destinations.

One of the taxi drivers told DAILY GUIDE that he serviced his vehicle every week because of the bad nature of the roads.

He stressed that the drivers did not have any problem with anybody and that 'our problem is with the bad nature of the roads.'

'The mechanics are 'chopping' our money because if you don't send your car for servicing and repairs, you will starve,' he added.

The drivers indicated that the wear and tear of their vehicles had increased because of the bad roads and that it was time immediate action was taken to ensure a long lifespan for their vehicles.

The Drivers’ Union
The Second Trustee at the Asakae-Whindo Drivers' Union, Timothy Kanor, popularly called 'Master Red', noted that the protest was in order.

He asserted that the drivers had raised the issue with the appropriate authorities for close to five years and nothing had been done about the problem.

'We have been telling the assembly and other authorities about the bad nature of the roads but they have not listened to us. At least this action will make them act.'

He stated, 'since the drivers could not continue using the road, we will continue to protest the whole day and even continue today (Tuesday) if we don't get any assurance of putting the roads into good shape from those concerned.'

The Assembly Member for Asakae Electoral Area, Alexander Acheampong, indicated that it was true that the drivers embarked on a protest due to the nature of the roads in the area.

He stated that he learnt that the reshaping of the roads had been awarded on contract to Kingspok construction.

John Laste, the Public Relations Officer (PRO) of the Sekondi-Takoradi Metropolitan Assembly, also noted that the roads had been awarded on contract.

Even though he could not mention the contractor, he stressed that very soon work to put the Asakae road in good shape would start.

A resident, Albert Yankey, said 'there is no smooth ride in and out of this town. It is like we are not part of Ghana,' adding that the 'whole town road is in a mess.'

Another resident, Jonathan Ankomah, who also indicated his support for the action of the drivers, noted that the people were fed up with the situation because it was unbearable.