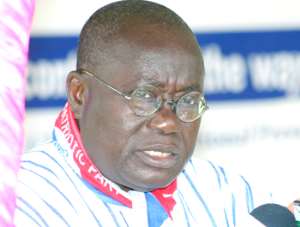 The NPP's agitations for a change of the voter's register which has been spearheaded by Nana Akuffo Addo and Dr. Bawumia needs to be subjected to serious scrutiny in order to determine its relevance and genuineness going into election 2016.

What the Electoral Commission guaranteed with the new biometric registration system was that any multiple registrations could be detected by the system and eliminated. Furthermore, in instances where multiple registrants could not be detected, the biometric electoral system guaranteed that no one could vote more than once without being detected by the system. This fundamentally presupposes therefore that you could have 76,000 Togolese voters on the register as claimed by Dr. Bawumia and none of these registered voters could vote more than once.

The next logical issue of contention in this discussion therefore is proof that the 76,000 Togolese voters on the register as alleged were placed on the register through the active and fraudulent connivance of a group of people or political party, or with the active connivance of EC officials. Thus, merely claiming that alien voters are on the register is not in itself conclusive evidence of the register being compromised in favour of one party or the other. What evidence has been presented by Dr. Bawumia and Nana Akuffo Addo to date that these alleged alien voters are categorically not Ghanaians except for a claim that they are also registered on the Togolese register- a claim which is rendered weak and untenable considering Ghana's dual citizenship regime.Indeed by virtue of geographical realities it should not surprise any objective mind that there would always be dual citizens from border countries in Ghana and vice versa.

If the current biometric electoral system guarantees that no one can vote more than once, then the only presumption underlying the agitations for change of the register is that the excess of voters on the register can be manipulated by EC officials in favour of a political party.

Dr. Bawumia and Nana Akuffo Addo should therefore come up with evidence to support their claim for a new voters register, especially on the presumption that the bloated register would be manipulated by EC officials in 2016 in favour of a political party. So far Dr. Bawumia and Nana Akuffo Addo have failed to present undisputed evidence of any acts of the EC calculated to manipulate a bloated register in favour of any party.

Nana Akuffo Addo had a whole nine months during the election petition to demonstrate that the results of the 2012 election were fraudulently procured. He could not convince the whole world and the court that any aspect of the electoral process including the voters register was the cause of his defeat in 2012.

Why is he again attacking the integrity of the 2012 election results and a world acclaimed Electoral Commission which successfully organized that election? How does he hope to gain the support of the majority of the Ghanaian electorate after undermining the integrity of the political process by taking the issue of the electoral register to international institutions and countries, and in the process painting in such a negative light the country that he aspires to lead.

Nana Akuffo Addo has since his defeat in election 2012 deliberately failed to fully accept the results of the election. Unfortunately, he has managed to hoodwink the majority of the NPP to tow his line without them interrogating all the issues that caused his defeat in 2012.

He continues to place the light in the wrong direction as to what caused his defeat in 2012, and has again without shame resurrected the electoral system as the cause of his defeat. What about his persona and approach to elections in Ghana. Is that not the real cause? Do current happenings within the NPP not provide a clear pointer to his imminent defeat in 2016? Why would the generality of NPP members not subject to scrutiny his approach of passing blame any time he loses an election?

Elections are contested on various issues prominent among which is the choice of candidates that the electorate is presented with. No matter how hard conditions in Ghana are, Ghanaians would not necessarily change leadership if the available alternative does not present itself as a better alternative than what is available now. An alternative that recklessly attacks public institutions such as the Electoral Commission, and exhibits a penchant for looking for scape goats in event of defeat, would certainly not be a palatable alternative for Ghanaians.

An alternative that recklessly disturbs the peace of Ghana and cries wolf where there is none, would not gain acceptability come 2016. An alternative that constantly and unjustifiably puts down his country and its institutions at the least opportunity would obviously not command enough sympathy and acceptance to win elections in Ghana. Has Nana Akuffo Addo succeeded in convincing the majority of Ghanaians that he is the better alternative or the worse?

The basis for change of the current register as presented by Nana Akuffo Addo and Dr. Bawumia so far is not overwhelming, as weighed against the cost of replacing the current register- in excess of USD$250Million. One wonders why anyone that truly loves Ghana would want to agitate and sanction such a reckless waste of scarce resources in the country.

In view of the fact that the call for the change of the voters register affects the credibility of the Electoral Commission, the issue should be handled with a lot of circumspection. The Electoral Commission should not be stampeded into changing the voters register merely because a political party is calling for its change. The grounds for such a change should be overwhelming. A bloated biometric register does not necessarily affect the credibility of election results based on such a register. Indeed all elections in Ghana and most countries have been conducted with bloated registers.

The Electoral Commission has procedures for addressing issues related to bloated registers and elections in Ghana. It should be allowed to do its work in order to preserve its credibility in the national interest. Voters register should never be changed in Ghana at the convenience of politicians, or else that would be the precedent that all defeated parties would follow in future elections.

Akufo-Addo Extends Partial Lockdown For Another Week
47 minutes ago