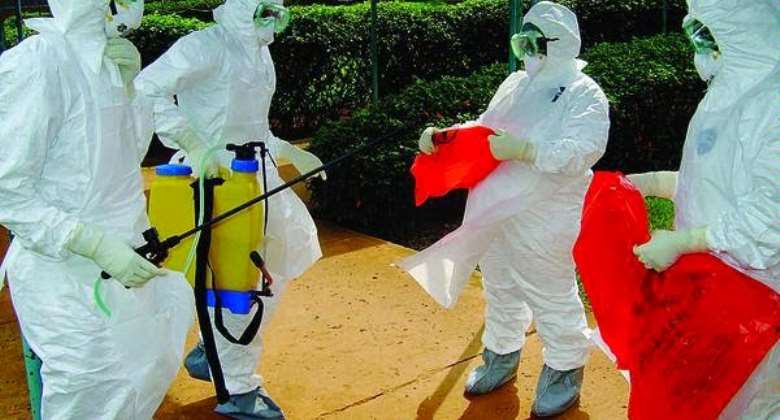 The Ghana Health Service in collaboration with Herald Foundation, a Non - Governmental Organisation which does most of it work on the health center have organised a day's trainning for nurses in Ebola Infection Prevention and Control. The training which seeks to equip Health personnel with the pre-requisite skills and strategies in hanling the Ebola disease brought together over 90% of Nurses who work in the Akroso zone of the Birim Central Municipal Health irectorate and was held at Akyem Akroso.

Speaking to the Media after the program, Ms. Anastasia Atiogbe, Municipal Director of Health Service said, many people have lost sight of the deadly ebola disease mostly because Ghana has not been hit yet but still Health personnel should continue to equip themselves and take all precautionary measures in handling health cases since they can be taken unaware. She added that all safety precautions should be adhered to when handling patients to safe themselves from contracting the deadly disease.

On his part, Nana Nuako Oppong Kwakye known in private life as Sam Appiah Kubi, the Amanonehene of Akyem Awisa and the Director of Herald Foundation corrobarated the saying of the Health Director calling on Ghana not to loose sight of the disease. He added that training of Health personnels on the Ebola disease should not only be done in the capital cities since the disease is no respector of persons, where one lives or what one does. Outlining the plans for the program, Nana said that what was done is phase one of the program organised for mostly Nurses, other phases which will be organised for doctors, workers at the hospitals and heaalth centers and at other zones shall also be roled out in subsequent trainings.

The nurses who received the training said they are optimistic the training will go a long way to help their activities. They called on the ministry of health and other NGOs to organise such workshops for other health personnels in other part of the country.