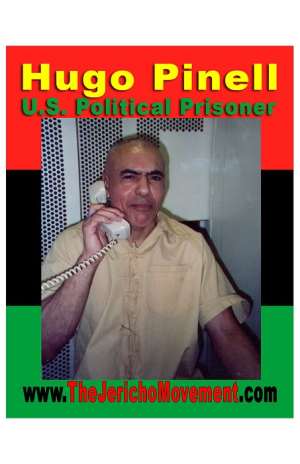 A former comrade of George L. Jackson, Hugo Pinell, 71, was killed on Aug. 12 near Sacramento.

Pinell, known by many as “Yogi Bear,” had recently been released from solitary confinement after gaining recognition as the longest serving prisoner held in administrative detention in the state of California. He had written to one of his supporters saying that he feared for his life at the facility where he was held. (KPFA interview with Kiilu Nyasha on Aug. 13)

In 1965 Pinell was given a three years to life sentence for the crime of rape, in which he says he was not guilty. He and his mother were told that if he did not confess he could face the death penalty. In addition, Pinell recounted that he was told he would be out of prison within a matter of months.

Pinell was stabbed to death by another prisoner after he was recently released into the general population of the correctional facility known as New Folsom. Corporate media outlets across the United States described the circumstances surrounding his murder as a “riot.” Nonetheless, it appears from these same reports that clashes only erupted after he was brutally stabbed in the prison yard.

Five decades after being sentenced to prison he met a violent and tragic fate. His death has sent shockwaves through the ranks of veteran Black Panther Party members, supporters of political prisoners and anti-racist forces.

San Quinten Six and the Martyrdom of George L. Jackson

Pinell was a member of the San Quinten Six who were involved in the attempted prison break to liberate George Jackson on Aug. 21, 1971, where he was gunned down by guards. Six people lost their lives in that incident, including three prison guards and two white inmates.

George Jackson was already well known throughout the African American revolutionary movement and the left as a whole. His prison letters were published in a book entitled “Soledad Brother: The Prison Letters of George Jackson.” (1970)

The Soledad Brothers were three African American prisoners, George Jackson, Fleeta Drumgo and John Clutchett, charged with killing a guard at the California facility in January 1970. Several days earlier, three Black inmates had been killed by white prisoner guards snipping after a racial melee in the yard.

A subsequent grand jury investigation in Monterey County exonerated the guards in the killings of the three inmates. One of the inmates killed by the guards was W.L. Nolen who was a mentor of Jackson.

In addition, Cleveland Edwards was killed in the yard, while Alvin Miller died in the prison hospital a few hours later. White inmate Billy D. Harris was shot in the groin by the guard’s fourth shot and lost his testicles.

In a letter about the Soledad massacre, Jackson wrote that three of his fellow inmates were “murdered by a pig shooting from 30 feet above their heads with a military rifle.” The prison guards that was killed days later was said to have been thrown out of the window in the same cell block as Jackson’s. (Soledad Brother)

A national movement arose in defense of the Soledad Brothers which drew the support of Angela Davis, a Communist Party member and lecturer who had been terminated from University of California in Los Angeles (UCLA) in 1969 only because of her political beliefs.

Jackson had been sentenced to a one year to life sentence in California in 1960 for being in the company of several others who had stolen $70 from a filling station. During his tenure in prison, Jackson began to read voraciously on history, military science, philosophy and Marxist-Leninist theory.

Prison authorities attempted to break Jackson’s confidence and defiance for many years. He became a leader and mentor for other prisoners during a period when the Civil Rights, Black Power, Anti-War and Left movements were gaining tremendous ground in the U.S.

His letters reveal also his interests in world affairs and revolutionary movements aimed at national liberation and socialism. Jackson is credited, along with W.L. Nolen, in the founding of the Black Guerrilla Family (BGF), a revolutionary prisoner organization in 1966.

Later Jackson and other BGF members were won over by the Black Panther Party (BPP) under Huey P. Newton. At the time of his assassination George Jackson was designated as the field marshal of the BPP.

Pinell spent decades in solitary confinement due to his refusal to compromise with the system and was the only person left from the San Quinten Six remaining in prison. All of the others charged in the Aug. 21, 1971 rebellion had been released decades earlier.

This attack comes during Black August, an annual commemoration of the resistance of African Americans to oppression and exploitation. Black August was created by political prisoners years ago and continues to be celebrated across the U.S.

The month-long acknowledgement of resistance fighters stems from the historical fact that many great efforts aimed at liberation took place during August.

Such historical developments include the beginning of the Haitian Revolution (1791), Nat Turner’s Rebellion in Virginia (1831), John Brown’s raid on Harper’s Ferry (1859), the Watts Rebellion (1965), the attempt by Jonathan Jackson, the younger brother of George, to free him from prison (1970), the San Quinten Rebellion (1971), the attack on the MOVE residence in Philadelphia (1978), the police murder of Michael Brown in Ferguson, Missouri, and now of course the assassination of Hugo Pinell.

The killing of Pinell illustrates even further the character of national oppression, economic exploitation and political repression against the African American people. Resistance to the inhumane conditions prevailing both outside and inside prison walls is continuing through the rebellions and mass demonstrations in Ferguson, Baltimore and other cities.

African Americans are still subjected to jobless rates at least twice as high as whites. Millions are confined to low-wage employment with no economic security or social benefits.

Every week news stories are reported about African Americans being gunned down by police and vigilantes. At the same time the federal government even under a Democratic Black president has systematically refused to seriously address the mounting crises in communities across the country.

The school-to-prison pipeline is still very much in evidence in urban areas. A disproportionate number of inmates and people under judicial supervision are African Americans and Latinos from poor and working class backgrounds.

Many of those who come out of prison are faced with numerous obstacles to finding employment, housing, educational resources and the right to participate in electoral politics. Conditions within the prisons and jails are horrendous with overcrowding, food unfit for consumption, threats of violence and abuse by guards and other inmates.

There are still many political prisoners inside the U.S. despite the “human rights” posture of successive administrations. Until the system of national oppression and capitalist exploitation is overthrown there will not be any hope for ending the prison-industrial-complex.

Moreover, until the system is transformed the oppressed will continue their rebellion against it seeking its eradication. Prisoners have continued to engage in protest activities through work stoppages and hunger strikes.

The progressive and left movement in the U.S. and around the world will be compelled to escalate their efforts in support of prisoners.

YOGI AND THE SAN QUINTEN SIX