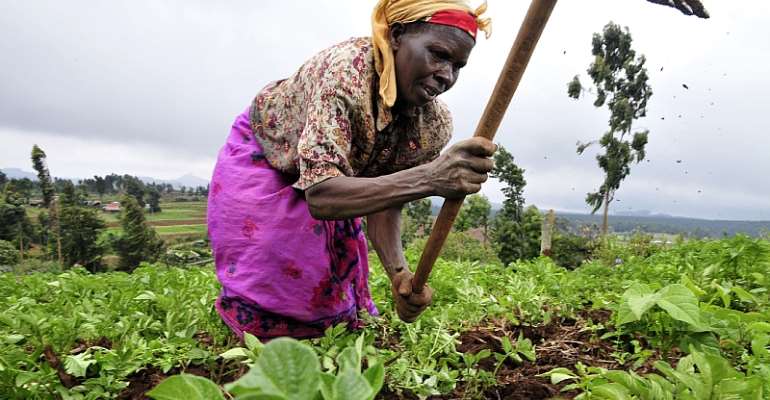 Participants at an advocacy workshop organized by the Alliance for Food Sovereignty In Africa (AFSA) in Accra, Ghana have express disapproval of a plant variety protection protocol recently signed by a few African diplomats in Tanzania. The protocol frowns on collective intellectual property rights and will displace indigenous seeds that have formed the backbone of human society since primitive communalism.

Under what has been christened the “Arusha PVP Protocol”, local farmers with small farm sizes but who ensures sustainable agriculture, provide diversity in food crops and who are in the lead of the campaign to eradicate hunger, will be greatly marginalized.

Opanyin Kwame Sekyere, a local organic seed producer from Offuman in the Techiman district of the Brong Ahafo Region of Ghana understands the criminality of the protocol so well. In an exclusive interview with this reporter in February this year, he said “… by soliciting my support to formulate a bill which seeks to make me rich and overcome poverty by registering my seeds but demanding that those seeds must be new, stable, distinct and uniform is like seeking my consent to dress me naked by removing my clothes and then drive me to the streets to be mocked at.

“The seeds I multiply under my huts you find over there were special seeds given to me by my father when I first married my wife. I survive by multiplying the seeds for the farmers in my community who in turn bring me some grains and other crops from their harvest. I also cultivate some of the seeds with my family on my fifteen acres of land. As I understand, the Plant Breeders Bill before the parliament does not accept my seeds and that is why I will not qualify for registration under the bill” he explained.

But the traditional farmer is even more disturbed. According to him, no parliamentarian alive to his responsibilities unless he be a bandit, a rogue or ignorant, will seek to pass a bill which will disrupt his livelihood because he mandates that parliamentarian to represent him.

A full text of the statement issued after the Pan African advocacy workshop is published below unedited;

African governments, ignoring the protests of their farmers and civil society, in July 6, 2015, agreed an oppressive 'plant variety protection protocol' that will open up their countries to commercial seed monopolists, while limiting farmers rights to save, use, exchange, replant, improve, distribute and sell the seeds they have developed over countless generations.

On 6th July 2015, in Arusha, Tanzania, a Diplomatic Conference held under the auspices of the African Regional Intellectual Property Organisation (ARIPO) adopted a harmonised regional legal framework for the protection of plant breeders' rights.

The previous Draft has come under consistent and severeattack by the Alliance for Food Sovereignty in Africa (AFSA) because it is based on a Convention known as UPOV (International Union for the Protection of New Varieties of Plants) 1991 - a restrictive and inflexible international legal precept, totally unsuitable for Africa.

Crucially, the ARIPO PVP Protocol proposed extremely strong intellectual property rights to breeders while restricting the age-old practices of African farmers freely to save, use, share and sell seeds and/or propagating material.

These practices are the backbone of agricultural systems in Sub-Saharan Africa; they have ensured the production and maintenance of a diverse pool of genetic resources by farmers themselves, and have safeguarded food and nutrition for tens of millions of Africans in the ARIPO region.

The Arusha PVP Protocol is part of the broader thrust in Africa to ensure regionally seamless and expedited trade in commercially bred seed varieties for the benefit, mainly, of the foreign seed industry. Multinational seed companies intend to lay claim to seed varieties as their private possessions and to prevent others from using these varieties without the payment of royalties.

Germplasm developed by farming households over centuries is increasingly under threat of privatization; and ecologically embedded farming practices risk being destabilised and dislodged.

The broader modernization thrust of which the Arusha PVP Protocol is an intrinsic part, is designed to facilitate the transformation of African agriculture from peasant-based production to inherently inequitable, inappropriate and ecologically damaging Green Revolution/industrial agriculture.

Such a transformation will lead to many farming households being threatened with marginalisation or extinction, without alternative options for survival.

It is worthwhile to note that a 2002 Food and Agriculture Organisation and World Bank study, the ' International Assessment ofKnowledge, Science and Technology ' (IAASTD), strongly recommended a complete shift away from the Green Revolution's industrial agriculture to agroecology.

Despite AFSA's well-established track record of constructive engagement with ARIPO on the Draft ARIPO PVP Protocol, and despite it being a Pan African network of African regional farmers and NGOs, working with millions of African farmers and consumers, AFSA was purposely excluded from the Arusha deliberations.

This restriction stands in sharp contrast to inclusion in the deliberations of the UPOV Secretariat, and other foreign entities, including the United States Patent and Trademark Office (USPTO), the World Intellectual Property Organisation (WIPO) the European Community Plant Variety Office (CPVO) and the French National Seed and Seedling Association (GNIS). The commercial seed industry (e.g. the African Seed Trade Association (AFSTA)) was particularly well represented.

Acceptance of the Arusha PVP Protocol will eliminate this option. Smaller countries are bullied into accepting their subordination to regional bodies that are dominated by more powerful foreign countries and multinational corporate interests.

During the deliberations in Arusha, several delegations raised serious concerns that the Draft ARIPO PVP Protocol eroded national sovereignty because of the extensive decision-making powers vested in the ARIPO Plant Breeders Rights Office (PBRO), which operates at a regional level.

The government of Malawi, in particular, said that this would "have a demeaning and nullifying effect". Consequently, after long hours of negotiation, changes were made that now give Contracting States an explicit right to object to any Plant Breeders' Right (PBR) - as granted by the ARIPO PBRO, regionally - in which event the PBR will not be awarded national protection.

Further, Contracting States and not the ARIPO PBRO will have the right to issue compulsory licenses in the public interest.

Notwithstanding these changes, a centralised regional PVP approval system will be established and the ARIPO PBRO will have full authority to grant and administer breeders' rights on behalf of all Contracting States (e.g. to decide whether or not to grant protection, nullify or cancel PBRs, etc).

These regionally granted PBRs will have a uniform effect in all Contracting States. Expediently, Contracting States will be required to put scarce public resources at the disposal of breeders to enforce breeders' rights at the national level.

The Arusha PVP Protocol will come into force when four member states of ARIPO ratify it. In April 2014 the UPOV Council, at the cost of breaking its ownrules , verified that the Draft ARIPO PVP Protocol conformed to the 1991 Act of the UPOV Convention, allowing ARIPO itself as well as ARIPO Members that ratify the Protocol, to become Parties to the 1991 UPOV Convention.

With the new changes, to become a member of UPOV 1991, ARIPO will have to re-submit the Arusha PVP Protocol to the UPOV Council, to reassess its conformity with the 1991 Act.

AFSA has also indicated, in many public statements during discussions on the Protocol, that UPOV 1991 restricts farmers' rights to save, exchange and sell farm-saved-seed and/or the propagating material of protected varieties in their possession.

Farmers' rights are recognised in the ITPGRFA yet this has been ignored by the 14 member states of ARIPO that are also Parties to the ITPGRFA. By adopting the Arusha PVP Protocol these countries have placed the rights of plant breeders ahead of farmers' rights.

AFSA is vehemently opposed to the Arusha PVP Protocol. This Protocol's underlying imperatives are to increase corporate seed imports, reduce breeding activity at the national level, and facilitate the monopoly by foreign companies of local seed systems and the disruption of traditional farming systems.

AFSA remains committed to ensuring that farmers, as breeders and users, remain at the centre of localised seed production systems and continue to exercise their rights freely to save, use, exchange, replant, improve, distribute and sell all the seed in their seed systems.

ALLIANCE FOR FOOD SOVEREIGNTY IN AFRICA