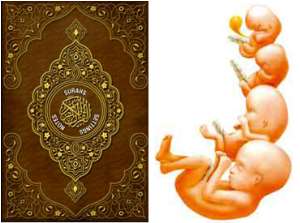 "It is especially in the field of embryology that a comparison between the beliefs present at the time of the Qur'an's revelation and modern scientific data, leaves us amazed at the degree of agreement between the Qur'an's statements and modern scientific knowledge. Not to mention the total absence of any reference in the Qur'an to the mistaken ideas that were prevalent around the world at the time, If I were to spend as long on all the details of reproduction contained in the Qur'an, as the subject merits, this pamphlet would become a book" --- by Dr. Maurice Bucaille, in his book, "The Bible, the Qur'an & Science"

The Creation of Man
"We (Allah) created mankind from a progeny and from clay(epitome of clay) Then we placed him as a (drop of) sperm in a place of rest firmly fixed. Then we made the sperm into a clot of a congealed blood; then of that clot we made of (fetus) lumps; then we made out of the lumps bones and clothed the bones with flesh: Then we developed out of it a different creature, so blessed be God, the Best to create! And after which you would die. And you would be resurrected on the Day of Judgment"

"It is He(Allah) who brought you forth from the womb of your mothers when you knew nothing; and He gave you hearing and eye sight and intelligence and affection: that you may give thanks(to Allah)" ---Q-16:78

Analysis: There are at least 60 verses in the Qur'an that clearly talk about human reproduction. One of the Ahadith that coincides with those verses was narrated by Abi Abdul Rahman Abdallah Bin Masud, may Allah be pleased with him said: The Prophet may the peace and blessings of Allah be upon him said: 'Verily, the creation of each one of you is brought together in his mother's belly for forty days in the form of seed (sperm).He would become a leech-like object and after which would be transformed in a congealed blood . And then life would be injected into him and he would be commanded with four matters: His means of livelihood (daily bread) his work, life span, and whether happy or unhappy,(rascal).' Based on this verses and the hadith, a renowned Islamic Scholar from Pakistan , Abu A'la Al Maududi in his Qu'ranic Interpretation entitled; The Meaning of The Quran, published in Lahore, Pakistan in 1994, observed that the entire process of human creation was in three steps:

1. The initiation of creation (that is upon conception of a woman).

2. The formation or perfection (from a clot of blood to a full fledge human body).

3. Bringing to life (where Allah injects life into the body).

The most celebrated 21st century Qur'anic Interpreter par excellence, Shiekh Muhammad MutawwaliiSha'raawii, an Egyptian analyzed in his book entitled: "Mu'jizatul Qur'an" or 'Miracle of the Qur'an' that: "(Everyone should)sit and take few seconds and ponder over what he or she was created from. From a discharged (water) substance, from cell so minute and microscopic that it could not be seen by the naked eyes But that your originator, Allah the Almighty in the powers vested into Himself, formulated these cells in their minute forms to be the basic matter that initiates the very life of mankind after he created Adam and Eve.

The rest will finally remain in baby's body to serve as the source of development or growth from strength to strength after the baby is born. And at the same time we see this cell, in its minutest form creates millions of things that are made up in the human body and all what the body needs in it to live. All these show or indicate an absolute engineering skill that is only in the domain and dominance of Allah, the Al-mighty!"

We are all created from billions of cells and at the center of each one are the instructions (from Allah) and the blue print for building our bodies just stored in a form of a chemical called DNA. The renowned American writer and motivational speaker, Dr. W.W. Dyer provided an interesting analysis which buttressed the above verse of the Quran and the wisdom of the prophet that comes with it.

He said in his book entitled, "The Power of Intention", that: "There is what some people call, a future-pull in DNA that is present at conception in each of us. In the moment of our conception, when an infinitely tiny drop of human protoplasm(a living substance inside the cell, it compose of nucleic acids, proteins, lipids, carbohydrates and inorganic salts) combines with an egg, life in physical form begins, and God directs the growth process of our body structures, the shape of our physical features, our development including our aging are intended in that one moment of conception, the sagging (floppy or droopy) skin, the wrinkles and even our death are all there.'

Think of an immense army composed of millions of soldiers. They are advancing toward a common target, they encounter obstacles in their ways, and find themselves in mortal danger, but in spite of all these difficulties the army does not give up. The space these soldiers must traverse in order to reach their target is one hundred thousand times larger than they are themselves. Of course, such a crowded army setting out on such a difficult road will need guides and equipment to help them reach their goal. This huge army with 300 soldiers inside the make body. The soldiers are the sperms. Each one is about one hundred of a millimeter in size. Their target is to reach the egg cell and to do this; they must travel a very long road.

Of the 300 million sperm cells that set out on the road together, only the strongest one thousand will succeed in reaching the egg. Out of these only one single sperm[or in some instances two,[rarely three, four etc.] will win the race, the sperm first set out a long journey within the male reproductive organs, passing through various stages on their way to maturity. In this maturing process, the sperm have many helpers. The fact that such a thing occurs in the clear proof that the cell is under the direction of a supreme intelligence (Allah). Allah has placed every one of the approximately 100 trillion cells that make up the human body in its proper place; He has given to each one the qualities it needs; and He has given each the instrument to do its work perfectly.

Science has established that just within 10 days of fertilization the mother's hormones will begin to show changes in her body, the embryo elongates after 2 weeks. Then after 4 weeks the embryo begins to formulate eyes and other organs. After 5 weeks the nose begins to take shape, at 6 weeks, the embryo becomes half an inch long and after 7 weeks the embryo could move its hands with clearly defined fingers, Its internal organs are visible, the eyes are formed at 8 weeks, the fingers of the hands are well defined at 10 weeks, the Embryo is considered a fetus and can move actively. At 11 weeks it increases by 2 and half inches long and at 12 weeks 3 inches long, by 14 weeks its palms are formulated. By 15 weeks the sensory organs are nearly completely formed and by 17 weeks it is actively turning inside the mother's womb.

At this time it begins to make strange sounds referred to as 'fetal respiration'. With eyes closed though it could see. It receives food from the mother through the umbilical cord and returns its waste through the same cord. At this stage all its physiological features are fully developed but it takes another 8 weeks for the fetus to have a remote chance of surviving outside its mother's womb. The growth in this fetal stage is silent and unseen.

The fetus is protected in the mother's womb like a king in a castle: It is firmly fixed and gets the protection of the mother's body on which it depends for its own growth until birth. Believe it or not, in all the above mentioned processes, the mother feels the impact physically, physiologically and psychologically in her body due to hormonal changes, leading to nausea, vomiting, fatigue, queasy feeling, bloating, flatulence, frequent urination and mood swings.

Eventually the fetus is ready to be delivered, the uterus begins its powerful contraction and the process of birth begins. At this point the sort of severe pain that mothers undergo is highly unbearable, upon delivery, Allah the Merciful and Al-Mighty makes the woman produce chemicals in her body that defuses this pain as a sort of immediate post-natal Anesthesia.

This and the joy of a new born baby placed in her fold would make her resist the pains she underwent and thereby disguise her mind from anxiety to go through another reproductive process in the future.

Clearly, going by the above analysis, it is obvious that the Qur'an is the only most authentic living divine scripture, among all other scriptures, which were tempered with. It is replete with scientific prophesies that scientists from all walks of life are getting fascinated by its crowd-pulling, catchy and captivating coincidence with their discoveries!

References:
The Miracle of Human Creation, by HarunaYahaya.
The Miracle of Life, an Emmy Award winning DVD documentary, produced in 1982 and presented by a world renown Swedish Photographer, LernnartNilson.