​Is Africa A Cursed Continent? 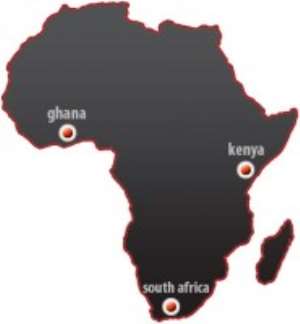 Recent events on the continent and other parts of the world have kept me wondering whether one should be proud of being an African. The insurgent attacks from terrorist groups such as Al Shabab and Boko Haram on innocent citizens are a cause of worry to all well meaning Africans. The attack on Westgate Mall by Al Shabab in September 2013 and the kidnapping of over 200 innocent girls In April 2014 by Boko Haram are events that would continue to haunt our leaders. It is over a year now and nobody knows the whereabouts of over 200 girls kidnapped by Boko Haram.

In Nigeria, the cooperation between Chadian, Nigerien and Nigerian troops have helped improve the security situation in areas occupied by Boko Haram. Reports so far indicates that the combined forces are doing a good job and have managed to destabilise most of the bases of Boko Haram. The news of Nigerian Army attacking the base of Boko Haram and releasing over 700 captives should be good news to Africa.

The sad part of it is that some of the women released have been impregnated by these criminals. What prevented President Jonathan and his administration from requesting for assistance from these neighbouring countries, but had to wait for such a long time before agreeing to cooperate with them?

Just recently, Al Shabab struck again and this time, it was innocent university students in Garissa who felt the brunt of their attack, students numbering about 147 were killed in cold blood. These are innocent students whose only “crime” was to seek for knowledge. How cruel can some people be.

The inability of African states to have a joint military force to crush these terrorist groups is a big indictment on the leaders of the continent. Al Shabab is having a field day in Kenya and instead of the Kenyan government to be proactive; the government seems to be doing too little in combating these criminals. Why should the Kenyan military forces wait till Al Shabab kills innocent citizens before they begin to attack their bases? If they knew of these bases, what prevented them from attacking and destroying them earlier?

These terrorist groups are using religion as a smoke screen to cause pain, mayhem and instability on the continent. Innocent citizens are getting displaced and losing their lives daily and yet our leaders are doing too little to flush out these criminals. The use of religion as a basis for these attacks is very worrying. No true religion would use violence to win more souls and at worse kill innocent citizens to further a cause.

Islam does not preach violence and no true religion of God preaches same. Islamic clerics in Africa must do more to condemn and disassociate themselves from such groups. They should also educate the Muslim community, especially the vulnerable young ones about the evils these groups are perpetuating against Islam and innocent people.

The recent report of African migrants drowning in the Mediterranean Sea is a reflection of how bad conditions are on the continent. Reports in the foreign media indicate that over thousand lives have been lost in the Mediterranean over the past few weeks. Most of these migrants embark on this risky adventure due to lack of opportunities in their home countries. Some of them too might be running away from conflicts and authoritarian regimes who are abusing the rights of innocent citizens.

In one of the recent boat disasters recorded, it was reported that some of the migrants threw their colleagues into the sea due to a religious row on the boat. I sometimes wonder whether we even understand religion. Why should we use religion to commit crimes against each other?

I shudder to think of how our leaders feel when they hear stories of migrants drowning in the high seas. Our leaders are not doing much to ease the suffering of the ordinary citizens; they are not creating enough opportunities for Africans to stay and work on the continent, this is forcing most of them to leave for Europe and America in search of better opportunities and living conditions. Most of the leaders are only interested in amassing wealth for their families and friends. They buy the best houses in Europe and American with their ill gotten wealth, loot our treasury and save the money in some of these European countries.

The Western world has not help Africa in resolving some of these challenges, until they stop the unfair trade practices and ensure that trade between them and African states is done in fairness, Africans would continue to migrate to these countries to seek for greener pastures. European countries should also desist from keeping the ill gotten wealth of some of these leaders. Instead of making their banks safe haven for these corrupt leaders, the West should rather sanction these leaders and confiscate the huge investments they make in foreign countries. These investments should be returned to their countries after they have left office and used to create opportunities for the citizens.

In recent past Libya used to be a safe haven for most of these migrants, some of them were making a decent living in that country until we allowed the West to overthrow Mummar Gaddafi. Even though the late Libyan President was criticised by the West as having a bad human rights record, his reign helped ease the rampant migration of Africans to Europe. With his overthrow, Libya to a large extent has become a failed state and African migrants are feeling the brunt. Now the African can no more make it on his own continent.

The recent xenophobic attack of other African nationals in South Africa was received with shock by other African states. It is sad and unfortunate that our fellow Africans would treat their own in this manner. If for nothing at all our brothers should have thought of the assistance most of the African states offered them during apartheid. It was not only a disgrace to the entire continent but also made mockery of our quest to unite the continent under the African Union.

The AU has been in existence for over 50 years, yet the people of the continent are faced with economic, social and political challenges. Our leaders cannot walk their talk and care less about us. Is it a curse to be a black man and an African? There is nothing much to be proud of as an African. The recent peaceful elections held in Nigeria placed the continent in the limelight, but with the current developments in Togo where the opposition has rejected the results of the polls paints a gloomy picture about the continent. Currently Burundi is trending and the story coming out of that part of the continent is not the best. What is it at all at the Presidency that makes some of our leaders not to want to leave in peace but rather want to leave a legacy of bloodshed and deaths before they bow out? The experiences of Blaise Comproare and Laurent Gbagbo is yet to sink in for some of these leaders.

Why can’t we enjoy this wonderful continent where our weather, land and natural resources make it the preferred destination of any living thing on this earth? As an African I am proud of my continent and would urge the leaders to do more to save us from our current predicament.

We should not feel despair and throw our hands in the air. There is hope and that hope would come from all Africans who believe in the continent. Let’s continue to do our best to voice out about the ills of our society. Let’s hold our leaders’ accountable, expose the bad nuts amongst us and with a positive mentality, we shall get there. The African dream is on and with this quote from Dr. Kwame Nkrumah “I am not an African because I was born in Africa but because Africa was born in me….” I am consoled by the fact that Africa would get it right with the right leadership and the right mentality someday, sometime.