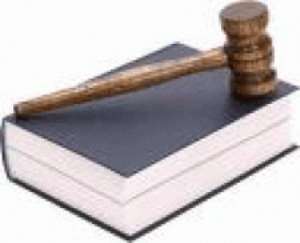 The integrity of the Ghana judiciary is on a downward trajectory. For the past several years, many a Ghanaian has had nothing good to say about the Ghana judiciary but mostly bad things. There may just be a handful among the judges that can be said to be men and women of integrity, all the rest are purely bad nuts. They are corrupt. They are unprofessional. They accept bribes. They have sold, or sacrificed, their conscience for possession of material wealth.

The code of ethics for the law profession is nothing to the current judges, lawyers, clerks and registrars of the courts of Ghana. They have allowed sheer greed to cloud their intelligence and vision hence groping in the darkness for respect, acceptability and recognition as men of intellectual substance, from the public, but they will not get them. People have lost confidence in them and in the legal system as a whole.

I have many instances to cite to prove how the Court judges have proved themselves untrustworthy; twisting the truth to render obnoxious judgments most of the time, however, I will only mention just one today. They are not fair to mostly the poor people bringing cases before them as either the complainants/plaintiffs or defenders. To be honest with them, they are partly blameable for all the problems Ghana is painfully sailing through at the moment.

In a particular case where one has been accused of contempt of court, with the contemnor breaching the pendency of an injunction to say, swear in…..as a chief, contrary to the restraints as spelt out in the injunction, look at what has happened in the end.

Before continuing, let us define what an injunction is, and its purpose. “An injunction is an order issued by the court ordering a person to stop doing a specific action, e.g., a restraining order. Injunctions are typically issued to the defendant during a lawsuit”.

When the said injunction was issued, served on the defendant, with his signature appended to the Notice of Service document, the bailiff returned it to the court. Despite the availability of credible evidence that an injunction has been breached, with the necessary documents filed in court after conducting a court search to that effect, the unthinkable has happened.

The first judge was transferred. A second judge, more serious and resolutely determined to hear the case, was also transferred after initiating all the necessary processes to give a full hearing and determination to the case.

Here comes the crux of the matter. A third judge appointed to preside over the case simply threw it out for lack of evidence that the alleged contemnor had breached any injunction. In the file before the judge, there was nothing indicating that an injunction order has been served on the defendant.

The clerk had been transferred to Accra. When he was contacted on phone, he said he personally served the notice on the defendant and prior to moving to Accra on transfer, he handed over the entire file to the registrar. The file contained the signed notification of service document in addition to all the other documents proving the pendency of injunction before the defendant committed the act of contempt. He advised them to contact the court registrar to inquire if he did not hand over the file with its contents to him.

It is becoming rampant in Ghana to hear stories of court clerks and registrars taking bribes to cause the disappearance of files or some of a file’s contents. What is becoming of Ghana? It is really annoying that those very people entrusted with the interpretation of the law to ensure justice prevails are the very those conniving or colluding with those that can pay them heavy bribes, to pervert the cause of justice.

I am really pissed off to see the country’s judicial system in such a state of decrepitude. The three arms of government (the Executive, the Judiciary and the Legislature) are causing the downfall of Ghana. They are mostly not only incompetent, but also, corrupt to the core.

I honestly expect the Chief Justice, Mrs Georgina Theodora Wood, to sort the problem in her department. Ghana cannot continue to cope with the stinking corruption, unfairness in the delivery of justice, by the court judges.

Most Ghanaian judges behave disgracefully as though they have never studied law. They always have the thought of money at the back of their minds instead of bothering about the prevalence of justice in all the cases that they adjudicate. Shame on them! This is a stark indictment on the entire judiciary.

It makes one feel unease to be identified as a Ghanaian with all the senseless things going on in the country, spearheaded by the very those the society expects them to have acted contrarily. But to resign oneself to fate, dwelling in the pain of the bad things the members of the three organs of government (the Executive, Legislature & Judiciary) are doing as if we cannot rectify the wrongs is purely a defeatist idea. This is the very reason why I take people on, share my views and discuss issues as and when they come along.

If by telling the truth I have become your enemy, so be it! I will not sleep a wink until whoever caused the disappearance of that vital document from a file as alleged above is caught and punished. I may bring this up to the attention of the Chief Justice. We should not continue to sit on our backside doing nothing when some dodgy operatives within our law courts relish breaching the laws with impunity. They must be smoked out; held accountable for their evil deeds.