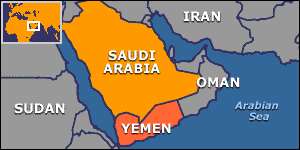 Still stinging from their last military humiliation 6 years ago at the hands of the Houthi tribal fighters in Yemen, the Saudi Arabian royal family has embarked on what is highly likely to turn into Saudi's “Vietnam”with their latest attempt at invading Yemen.

In 2009 the Saudi military's incompetence was exposed when their major offensive against the Houthi's along the Saudi/Yemen border was routed and in the following Houthi counter offensive a large chunk of Saudi territory was captured by the lightly armed Houthi fighters.

The last time a “Pan-Arab Army” tried to invade and occupy Yemen, in the early 1960's, Egyptian General turned President Nasser was forced to tuck his tail between his legs and pull his army of over 50,000 out of what he was to later sorrowfully admit had become “Egypt's Vietnam”.

The problems in Yemen are not about Shiite vs Sunni or Iran vs. Saudi Arabia. Its not about Obama, whose particularly inept administration has been forced to sit on the sidelines as the Saudi royal family launched this ill advised misadventure.

The problems in Yemen are all about tribal conflicts going back centuries and the only way to solve them is by a long, tedious process of negotiations. Back in 1990 a peace deal was painstakingly constructed that resulted in the reunification of Yemen. This peace deal which held for over two decades was mediated by what was then the leadership of a rag tag band of independence fighter calling themselves the Eritrean Peoples Liberation Front, a fact yet to be acknowledged by anyone covering the present conflict.

The Saudi are launching this war on the Yemeni people in an act of hubris and arrogance, paranoia almost, supposedly fearful of being surrounded by a ring of “Shi'ite enemies lead by Iran”, or at least that is what the talking heads in the western media would have us believe.

The fact is the Saudi royal family is brim full of a fanatically Wahabi fired hatred towards anything resembling a Shi'ite movement, though historically Shi'ites in west Asia hardly considered the Houthi's of Yemen real Shi'ites.

Saudi paranoia of Iran is based on little in the way of threatening Iranian actions, with the complete lack of Iranian involvement in support of the Bahrain Shi'ite uprising a point of fact. For all the talk of Iranian military support for the Houthi take over of Yemen the evidence to support this charge is not supported by anything concrete.

The Houthi's, fed up with their continuing neglect by the Yemeni government, and driven by the politics of hunger stalking Yemen, made a deal with former President Saleh, whose son headed the Yemeni army under the deal the Saudi/Gulf States forced down the Yemeni's throats two years ago, and launched their offensive to take over the country.

Right from the get go the Houthi's were calling for negotiations, though they did make it clear they were not going to allow the Wahabist ”Al Queda in the Arab Peninsula” (mainly composed of exiled Saudi fanatics) any further presence in Yemen.

Having been previously humiliated militarily in 2009, and fearing been seen as weak and incompetent by their subjugated Shi'ite population who reside in the oil rich eastern region of Saudi Arabia, the Wahabist Saudi regime has embarked on what by all appearances will turn out to be their “Vietnam”.

Of course they are doing this under the cover of a Pan Arab banner, with Egypt promising troops in support of the anticipated invasion and occupation of Yemen.

Egypt's latest General turned President Al Sisi is a particularly reluctant ally, having grown up with the memory of Egypt's humiliating defeat in its attempt to subjugate Yemen. It is no coincidence that a just a few weeks earlier Saudi Arabia and the Gulf States sent their leaders to Sharm al Sheik to announce over $20 billion in aid and investments for Egypt's tottering economy, hard cash President Al Sisi came hat in hand to beg for.

Fighting is reported to be raging on the Yemen/Saudi border and it is interesting to note that the Saudi military has yet to make any serious advances there. Being that the bulk of the Houthi fighters are concentrating for their push to capture Aden in the oil rich south of Yemen the Saudi military attempts to invade the Houthi heartland is not going very well.

At this point the Saudi military is still mainly an air war massacre against the defenseless Yemen people. If and when the promised ground offensive begins in earnest will see battle hardened Houthi militia pitted against a supposedly pan Arab army with little experience in real warfare. Fighting to defend their homes and families, as the Viet Cong did in Vietnam, Saudi Arabia will find its self in a Yemeni quagmire, Saudi's “Vietnam” in Yemen.

Thomas C. Mountain has been living and reporting from Eritrea, next door to Yemen, since 2006. He can be reached at thomascmountain at yahoo dot com, or via mobile at 2917175665.