Why Akans Call the White man, Kwasi and God, Kwame 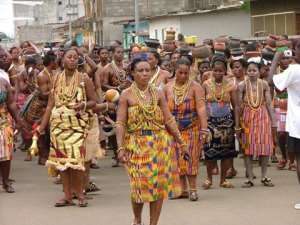 According to the Akan tradition, a child born to any parent comes with a name which is given according to the day in the week the child is born. If a child is born on a Monday, he is called Kwadwo and a girl is called Adwoa, those born on Tuesday are called Kwabena and Abenaa, Wednesday – Kwaku and Akua, Thursday – Yaw and Yaa, Friday – Kofi and Afua. If a boy is born on Saturday he is called Kwame and a girl is Amma. A Sunday born boy is called Kwasi and Akosua if she is a girl. Akans, in many situations, have given these day names to certain objects, deities and mythical figures. I will attempt to explain the reasons behind these names.

The Almighty God is one of those who have been ascribed a day name by the Akans. The Bible says that in the beginning God created the heaven and the earth. The earth was without form and void. It was in total darkness and God commanded light to take over the darkness. He created the firmament and separated it from the waters. The next in line to be created were the beasts of the earth and birds of the air. God created Adam and Eve and gave them dominion over everything. In a nutshell, God created all these within seven days and this takes us to the title of this article. According to the Hebrew calendar, the week ends on Saturday and therefore God rested on Saturday. The Akans, in their own wisdom, named God after the day He rested: Twereduampong Kwame as the Akans call Him.

The Akans say, albeit jokingly, that when God rested, the White man on Sunday took over the development of the world God had created. The Akans therefore called the White man Kwasi Broni – Kwasi being the day name associated with Sunday and the male name because the whites who first came to our shores were men. However, there is also another version of how the White man came to be called Kwasi. The story has it that, during the pre- and post-colonial period, the British ruled Ghana with heavy hands. They were mostly in military uniforms during the week except on Sundays. During the week barter trading went on between the citizens and the British merchants. The natives brought kilos of gold to the merchants and received in return two pairs of shoes and a spoon. The natives could not detect the cheating process in this barter system because most of them were happy to use shoes and also to eat with a spoon for the first time. On Sundays the British merchants put off their military uniforms and donned white priestly robes to go to church and showed kindness to all natives who came to church. The natives could not help but call the white man, Kwasi with the simple reason that they were kind on Sundays. During this time the children would say, Kwasi Broni, kyeme kapre (Kwasi Broni give me a penny).

I want to digress a bit and explain why the white man is called “Broni” by the Akans. During the slave period when the whites came in their big ships to capture slaves to America, some men stood by the sea-side and looked very far. From afar the cloud gives a false impression of meeting the sea like a thick wall. Cloud in the Twi language is “bro”. Suddenly the men who had gathered at the sea-side saw a big ship appearing from behind the cloud, (bro akyi). Since they all assumed that the white

The spider-god in the Ashanti folk-tales was also called Kwaku Ananse. The stories of Kwaku Ananse were first told in Ghana by the Ashantis. These stories were not written down but they were repeatedly told from generation to generation. The Kwaku Ananse stories gained root and spread throughout Ghana and to other West African countries. Ananse often acted as a go-between for humans and God. One of the stories narrated how he was able to persuade God to provide rain and light for humans. Ananse was one of the most popular of the animal tricksters in the mythology of West Africa. Ananse was named Kwaku because the Ashanti mythology reveals that Ananse was called Kwaku because the soul of the spider-god first appeared on a Wednesday.

What, then, is in a name? The first president of Ghana, Osagyefo Dr. Kwame Nkrumah, was not originally called Kwame. He chose Kwame because Akans called God Kwame. It was a means of creating an awesome myth around himself and to be feared. The Akans, especially the Ashantis, have the habit of changing the day names of newly born babies if they want the child to be named after a deity or some respectable elder family member or for some special reason like in the Nkrumah case. Other ethnic groups who copied the day naming tradition from the Akans do not follow this habit. For instance, the Ewes never change the day names of their new babies. Any Ewe person you meet was actually born on the day indicated by the name. The Akans do not follow that rule so strictly. The name itself and what it signifies may, thus, be more important for the Akans than the bearer's link to the day on which that person is born. That was why it was easy for the Akans to call the white man “Kwasi” without reference to the actual day on which he was born. And, indeed, most white people cannot readily tell you the day of the week on which they were born. Ask them and they will tell you they have to check on the calendar or ask mummy… But, for us, they are all Kwasi.