The Muslim plight: A Call to Tolerance or Creeping Fundamentalism 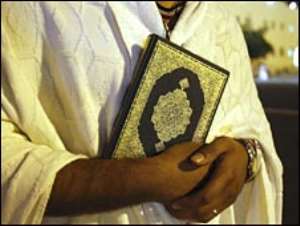 Following the recent debate on religious intolerance and coercion in Ghanaian public Institutions, we have head /read statements attributed to very respectable people some of which are falsehood and devoid of logic/justice.

I desired to write on this subject but decided not to do so because of the insightful statements issued by eminent Islamic scholars and their appeal for calm. Further, a citizen of Ghana filed a case at the Supreme Court seeking for an interpretation of the law on religious rights. This should have brought a clossure to discussions on this matter until a final determination by the Supreme Court.

However, I have read and heard repeatedly from certain individuals who spew falsehood and illogical speech, the most recent of which are statements made by two people I respect so much, Abdul Malik Kwaku Baako and Nii Ayikoi Otoo. Another author by the name Kwaku Otoo published an article which in reality is an indictment of the intellectual prowess he sought to portray entitled "Is Islamic fundamentalism creeping into Ghana?"

It is in the line of these and other developments that I chose to raise the pen which is mightier than the sword, whilst in a bus, to respond to their doubts and illogical statements whilst making a conscious effort not to discuss the substance of the matter which is due for determination by the Supreme Court.

It has long been opined by some Orientalists and some Christian writers that Islam was spread by coercion. Furthermore, they say adherents of Islam particularly women are coerced and oporessed to dress in the hijab and practice their faith. Eventhough all these are lies as I would explain later, it amazes me that people who claim to be of high intellect and profess that their religion was spread by sound preaching would support, practice and supervise a system of religious coercion. This is very surprising. Why can't they atleast on this matter proove to us that their preaches against coercion? Why cant they use their 'exalted' character to attract the Muslim students to their worship centers but rather through coercion? Do they have the moral right to accuse others of fundamentalism and extremism?

Also, I am surprised and shocked at how some media outlets chose to caption issues arising from this discussion. In publishing an article prepared by Dr. Wereko Brobbey aka Tarzan, myjoyonline.com captioned it as "Wereko Brobbey wades into Christian-Muslim debate". They saw the recent debate as one between Islam and Christianity rather than one of religious tolerance. By this, they succeded in whipping the sentiments in some christians who hitherto saw reason in the plight of the Muslims. I had prior to that read countless articles by Christians in support of the Muslim plight. Why such an attempt, whether deliberate or not, to twist the nature of the discussion?

I also read on the same network how Hon. Ayikoi Otoo sought to argue that Ghanaians should let sleeping dogs lie in this issue. He wondered why Muslims had started to call for their right when they had endured the status quo for several years. The seasoned journalist Abdul Malik Kwaku Baako is also reported to have made similar assertions.

My reply to them is this, that: On the same day they made those illogical statements, Americans were commemorating 'the bloody sunday', a day on which several blacks were brutalised by state officials because they marched for an end to a long standing system of racial discrimination and the right to vote. What I gather from these two intellectuals I respect so much is that, fifty (50) years ago those Americans should not have called for an end to the system of racial discrimination since it had existed for long. Or better still, the founding fathers of Ghana did wrong by striving for independence.

As for their argument that Muslims shoud not send their children to the quasi institutions to avoid the coercion, then that is left unto the Supreme Court to decide.

In his article 'Is Islamic fundamentalism creeping into Ghana?' published on modernghana.com, the author showed his intellectual dishonesty and hatred for Islam when he attributed several untruths to Islam some of which needs no refutation at all. Even a member of the Ku Klux Klan would not make such assertions.

He lied that Ghana eventhough secular, is a Christian nation primarily because the system of governance is of Western origin. This is absolutely schocking. Equating Western systems and democracy to Christianity is unthinkable and absurd. Without citing any reliable authorities to back his claim, he realised he had contradicted himself by saying Ghana is secular and a Christian Nation.

He went further to draw a link between the recent call for change in religious coercion, the growing of beards by Muslim men and wearing of the hijab by Muslim women as a sign of Islamic fundamentalism? This is nothing but shame. I have already refuted part of this claim above.

And I also add; When the likes of Luther King, etc stood for their rights they are celebrated and called civil rights activist but when a Muslim calls for his rights he is seen as gradually becoming a fundamentalist.

Where are we heading towards as a Nation with this sort of thinking by supposed intellectuals? Do they not realise the danger to our diversity is the sort of ideologies they propound?

How can a call/appeal by a neighbour who has lived peacefully with you for ages, for the respect of his/her religious teachings, tolerance for his faith and an end to coercion be met with such hostility?

This matter, in my opinion, could have been solved peacefully without even the involvement of the Court. Tolerance is the key and if the Bishops and Christian Council want us to believe that Christianity abhors religious coercion and is spread through fair preaching and wisdom, then they should please come out to reverse their order.

Lets continue to live side by side in peace with mutual respect for each other with an ultimate aim of building a prosperous Nation for us all.