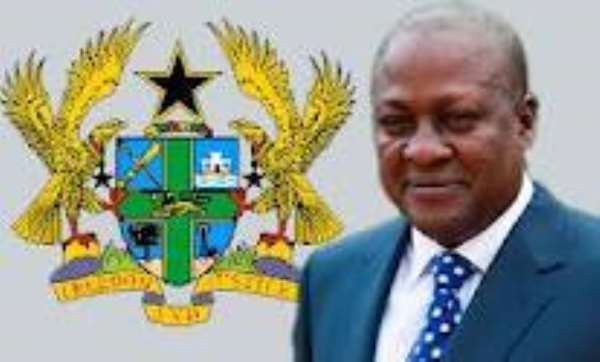 The threat that Boko Haram (BK) poses is no longer limited to the territorial integrity of Nigeria. BH has breached regional borders, threatened other states in West Africa, and showed signs of unlimited ambitions. If their intentions are wide, then the response should be equally regional. It is time to confront and decapitate the BK monster once and for all.

In the calculations of President John Dramani Mahama, the Boko Haram menace is no longer a problem for the Nigerian leader, President Goodluck Jonathan, but of the Economic Community of West African States (ECOWAS). As Chairman of ECOWAS, the Ghanaian President has taken a leadership role in calling on leaders in West Africa and Africa as a whole to mobilise their forces to confront and defeat BK once and for all.

As President Mahama's meetings with the German Chancellor, Angela Merkel, demonstrates, the President of Ghana is casting his eyes wider to places outside Africa for financial and military support for his Boko Haram Initiative. President Mahama said in Berlin (Germany) that Ghana is willing to mobilise regional and African forces to lead the fight against Boko Haram. “Ghana can provide troops for this”, explained Mahama. President Mahama will take his plans for the operation to the next African Union Summit.

The rise and continued rise of Boko Haram remains a mystery as well as a nightmare to West Africa and the Africa Union in general. Boko Haram adds to the continuing menace in Somalia with the destructive activities of Al Shabab, continuing uncertainty in Mali, Libya and religious conflict in the Central Africa Republic. These add to lesser known regional and national conflicts in the Sudan, Uganda, Ethiopia, and beyond.

In recent years, the Africa Union has tried to show leadership on matters African. Prior to this the Economic Community of West African States (ECOWAS) has been in the forefront of the struggle to end national and regional conflict emanating from issues relating to poverty, fragmented societies resulting from coups, and marginalisation of certain national groups in Sierra Leone and Liberia.

Since the latter part of 2013, Boko Haram, which was initially treated with derision and scorn, has undergone a rapid transformation, threatening the fabric of not just Nigerian society, but the West African sub-region in general. The world was only jolted into a sense of realism when Boko Haram invaded and abducted over 200 Chibok schoolgirls. The “Bring Back Our Girls” campaign was bold, innovative, and compassionate. But not enough. The government of Nigerian has shamefully gone silent on the fate of the abducted girls.

Since then, BH has captured large territories in Nigeria and brought large areas of northern Nigeria under its control with little or no resistance from one of the most powerful armies in Africa. Its process of destabilisation and mayhem continues unabated. The lack of a consistent military response from the hierarchy of the Nigerian army has emboldened the insurgents to expand beyond Nigeria, threatening neighbouring Cameroon. Early January this year, Boko Haram insurgents' fighters took over a military base of the Multinational Task Force in Baga, in the Nigerian state of Borno.

Independent media reports indicate that the city was completely destroyed and up to 2,000 people lost their lives in the carnage. It is significant to note that Baga was the last District in the Northeast of Nigeria still controlled by the central government. In addition to Baga, many towns in the Northeast have also fallen to the Boko Haram insurgents including Kukawa, Damasak, Gubio, Mafa, Bama and Konduga. The area under the control of Boko Haram covers more than 50,000 square kilometres and extends from Machena on the border with Niger to Damaturu and up to Yola on the Cameroonian border. Recently, Boko Haram was engaged in a daring battle with the Nigeria army in Maiduguri at a time when the Nigerian president was on a presidential tour to solicit votes for his re-election.

Like many such insurgencies, they provide harrowing scenarios for both West Africa and the wider international world. Is BK a guerrilla movement? If it is, no one seems to know what they are fighting for? For a start, many ordinary Nigerians are sceptical of the role of the international community. There is a perception among ordinary Nigerians that the continuing strength of Boko Haram has can be attributed to the fact that it is supporting by some powerful forces both within Nigeria and outside. Oil remains a key magnet. Apart from oil, there is also a belief that some nations would like to fuel the BK conflict, thereby forcing the Nigerian government to open up military space for them to use Nigeria as a launch pad for anti-terror activities and to boost the anti-terrorist industry in West Africa.

In a recent video from the self-acclaimed leader of Boko Haram, Abubakar Shekau, he openly teased the coalition against Boko Haram, which includes Cameroun, Chad, and Niger. Speaking directly and insolently to the Presidents of Cameroun, Chad and Niger, he said: "African kings I challenge you to attack me now. I am ready." The insurgent leader's rantings in the video clearly demonstrates that he is emboldened by recent events, and has gone regional, attacking the Presidents of Cameroun, Chad, and Niger. It must be noted that Cameroon has been subjected to repeated Boko Haram attacks, including the kidnapping of women and children.

If there was any point in African history where leadership is required to address this African specific issue, the time is now. The continent is racked by some intra- state conflicts, while the numbers of insurgent groups are increasing. Instability of this sort could give rise to creeping coups and counter coups, events which Africa would like to consign to history. This requires the sort of leadership and determination which the president of Ghana and leaders of the Africa Union are providing.

It is comforting when the chairman of the Africa Union Commission Nkosazana Dlamini Zuma urges the continent “to act quickly and collectively” against Boko Haram and similar movements. It is imperative that the Africa Union nations support the President Mahama initiative against insurgent movements in West Africa, and perhaps beyond. If the Africa Union states fail this time, the continent could be headed for rough times. Africa Union could also be providing the justification for unnecessary and unwarranted military interventions by western nations. In saying so, let me also sound a note of caution, that not all western nations and the so-called international community are our allies in the fight against Boko Haram. If ordinary Nigerian citizens do not trust some powers, that should be a warning sign – trust no one when it comes to Boko Haram.

It is time to confront Boko Haram and its sponsors both in Nigeria and beyond. The leader of the Boko Haram insurgents is quoted as saying "Here I am, alive. I will only die the day Allah takes my breath, …We will not stop. This is not much. You'll see“. The Africa Union must and should support the President Mahama initiative on Boko Haram with similar dogged determination. The time is now.