What Does The Kayayei Need-Hostels, Education, Skills Training Or Freebies? 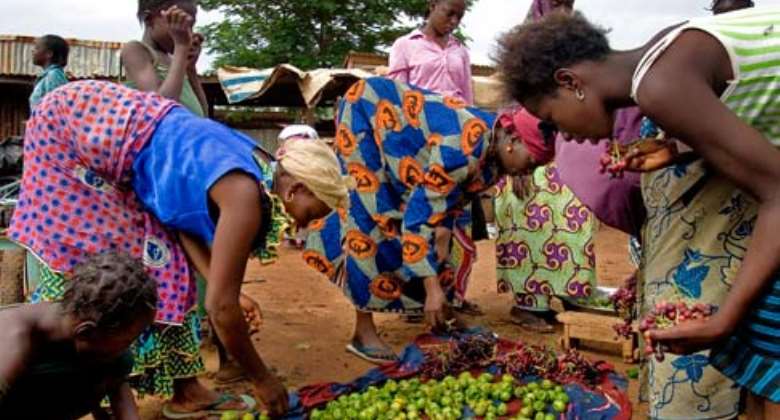 ''Everything around us is politics'' according to Kwasi Pratt Junior. It is therefore prudent for those who seek to govern us to be committed to ensuring that those who have left the comfort of their homes to seek non-existent greener pastures are provided with descent place to lain their head and access to education for their children. It is an open secret that majority of these girls are raped on daily basis. In fact, as a Social worker who happens to have worked with organizations that have provided some services to these category of people, I can say that some of them keep sexual partners for the purpose of protecting them from attacks. The results of these are the many children they give birth to.

THE CAUSES OF KAYAYEI
It is an undeniable fact that, given sufficient opportunities for employment, income, personal fulfilment, a more equitable distribution of resources, wealth and so on, most people would choose to stay close to their loved ones and their culture. In the absence of such an ideal world, people have to move (Klein 2000).

Education is free in the northern part of our country yet we see young ladies and young boys engaging in minor jobs in the streets of Accra, Kumasi, Tarkoradi and Koforidua. WHY ARE THEY NOT IN SCHOOL? That is the million questions which our politicians are not asking neither are they seeking to provide solutions of getting them to go to school.

In 2004, I was privileged to work for Assemblies of God Relief and Development Services (AGREDS) which has and is still training Kayayee girls in many skills training areas at Abgloshie where majority of these girls are. It is sad to say that many ladies from the north go and misrepresent the actual situation in Accra and take them from their parents only to bring them to come and do these jobs.

AGREDS as part of ensuring that they stopped movement from the northern sector to the aforementioned cities built training centres in Tamale, Yendi, Zabzugu, Bimbilla and I'm sure they might have added some towns. Unfortunately, these girls prefer to come to these cities to do kaya (load) work. In 2004, a group were trained in seamstress, hairdressing, tie and dye. They were provided with capital and machines and sent back to their various villages in a bus hired by AGREDS. A week later, majority were back. Their reason was that they wanted to do kaya work, buy some few things –cooking utensils and clothes-and go back to marry. Like many Ghanaian went to Nigeria in the 70 and 80 and came back with SOUND SYSTEMS and some few things so are these girls in cities of Ghana to acquire some few belongings to go back for men.

2012 promises to KAYAYEE:
The NPP promised in 2012 to build hostels to be rented at subsidized prices by kayayei. The president John Mahama referred to that promise as ''most insulting'' and said the best way was to doing what the NDC ''…is doing, we are going to the south and registering our little sisters who are kayayee and putting them in training, we are teaching them how to be dress makers, hairdressers and giving them other equipment so that they will come back and work for themselves”.

The question I am asking now is what is the status of the training? How many people have been trained, how many are back to the north and have not gone back to the cities to do kaya work? How many have been provided with working tools? What are the tools? Where do the girls sleep?

Because we make politics of everything, we forget to look at where our sisters sleep and considered the thought of it as ''most insulting''. I was part of the Ministry of Gender Children and Social Protection team that went to do an outreach for kayayee on 16th November 2014 at La-Nkwantanag. I was very sad to see 12 year old girls either with children or pregnant and sleeping in kiosks. Items distributed included: treated mosquito nets, mats rubber buckets, cooking utensils, pads for young girls, books, pens spoons and combs for school children to mention but a few.

Whilst the team thought pregnant girls needed the mosquito nets, they wanted the mat because according to them some do not have any better mat to sleep on. Hitherto, they were not tax, as part of widening the tax network; they now pay tax on daily basis. Is the government not in better position to make more money when hostels are built whilst efforts are made to ensure that factors that push them from the north are addressed in the long term?

Providing hostel accommodation and distributing items are both not the panacea to the kayayee challenges however, they serve a purpose which is very important toward finding a lasting solution to the rural urban challenges facing us as a nation.

Actual Need of the Kayayee and our contributions
What the kayayee need is education for their children who are potential kayayee if nothing is done.The various Assemblies in the three northern regions must pass bye-laws which will make it a crime if parents fail to send their child to school. Such parents are arrested and prosecuted.At the national level; those who engage in luring them into kaya and sex work must be arrested and prosecuted. Equally, men who rape and/or get these girls pregnant without accepting responsibility must be arrested and made to take responsibility of the uptake of the child.

Parents who allow their children to come to southern Ghana must be educated and if possible film the conditions of the kayayee and shown to their parents as part of awareness creation on the challenges of kayayee. It is time something drastic is done to stop this beginning with parents and opinion leaders in the north.

Imams and pastors must begin to talk about it to their congregation, chiefs and politicians but use every durbar to educate people about what the kayayee goes through in the south. Every child of the north must use every single opportunity that comes his/her way to talk about kayayee and why our sisters must stay home acquire some skills if they do not want to go to school. This is what we can do to help in finding lasting solution to the kayayee challenges.