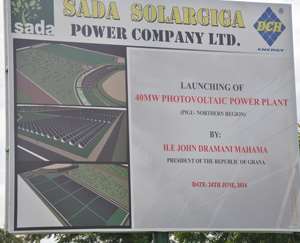 Plans by the Savannah Accelerated Development Authority (SADA) to construct 200 MW of solar plant in partnership with DCH Solargiga, a subsidiary of China's Solargiga Energy Holdings Limited at Pigu near Savelugu, has hit a snag.

Kampakuya Naa Abdulai Yakubu Andani, the regent of Dagbon and Naa Nantogmah Yakubu, chief of Pigu, are allegedly at each other's throat over who has the customary right to superintend the sale and release of land for the project.

President John Mahama, according to public announcements, was supposed to cut the sod on June 24, 2014 for the commencement of work on the project, but this could not come off following the rift over the rightful owner of the land.

A joint venture agreement was signed between the Acting Chief Executive of SADA, Charles Jebuni, and the Managing Director of DCH Solargiga, Zhang Gang.

The first phase of the project was supposed to install a 40 MW PV plant at Savulugu/Nanton, according to the agreement, for SADA to develop PV projects totaling 200 MW in the country's northern savannah ecological zone.

Under the terms of the agreement, DHC Solargiga and SADA own 90 percent and 10 percent of the new joint venture company respectively.

Investigations by DAILY GUIDE have revealed that the agreement, which had been signed in respect of the project -estimated to cost $117 million - paved the way for it (project) to commence but the litigation over the land had halted work.

The over 500 acres of land acquired by SADA, which agreed to pay a compensation package of GH¢250.00 each for an acre - summing up to GH¢125,000 – to affected farmers, might be abandoned.

According to the spokesperson for the Pigu chief, Abdul-Rahim Nantogma, under whose jurisdiction the project is supposed to take place, the terms with SADA were agreed upon and the people were informed about preparations to settle them while the land was being cleared.

He disclosed that chief Nantogmah Yakubu did not sell the land to SADA but offered it to them for free, with a promise by the company to engage the youth of the area who are not gainfully employed.

Abdul-Rahim Nantogma emphasized that SADA readily agreed and was preparing to work out the modalities for the payment when the Regent of Dagbon, Kampakuya Naa  Abudulai Yakubu Andani, was alleged to have questioned the authority of the Pigu chief in leasing the land to SADA.

The Pigu chief and his elders were summoned before the Northern Regional Police Command where they were interrogated on the matter, but the chief insisted he was the legitimate occupant of the skin and had the right to apportion land for development projects.

Chief Nantogmah Yakubu disclosed to DAILY GUIDE that he was enskinned chief of the area 22 years ago by the late Yaa-Naa Abdulai Yakubu Andani II, who happened to be the father of the current regent, maintaining that he did not fault in his decision.

The Pigu chief disclosed to DAILY GUIDE that he was worried over the delay of the project, as he was optimistic that it would open up job avenues for people in and around the Pigu community.

He appealed to persons pulling the strings to consider the benefits the project would bring to the masses and reconsider their stance.