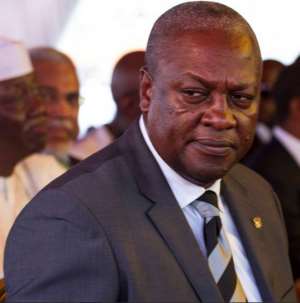 Progress is the goal of every nation that is striving to bring relief to its citizens within the social and economic spheres. Leaders of such nations relegate their personal interest to the background and look at the broader picture of prosperity for the country. They protect the public purse, eschew corruption, and seek value for monies spent. Malaysia and Singapore, who many times have been cited against Ghana in comparative economic analyses by economic pundits, have held such tenets of selflessness and financial discipline in high esteem; and the evidence is there for all to see.

But our beloved country, Ghana, obviously and evidently is going in the opposite and dangerous direction, especially in these recent times. The nation is fast moving into the status of a failed state, if not already there. The despondency, desperation and morass of oppression and underdevelopment that have bedeviled Ghanaians under the watch of John Mahama are unimaginable. Nobody thought Ghana was going to come to this end. But here we are!

Mahama has come out to be one of the most clueless and useless heads of state in sub-Saharan Africa. He keeps promising left, right, and center with nauseating effrontery without shame, but yet, delivers nothing. He continues to ridicule himself now and then in an infantile manner without remorse. What a pity!

Ghanaians were promised a better Ghana, but ironically handed a bitter Ghana. Ghana has now become a laughing stock. The ongoing Brazil 2014 World Cup tournament has clearly exposed the ineptitude of John Mahama. His incompetent sports ministers who failed at their assigned and paid duties succeeded in putting Ghana on the guillotine. And so absurd has been Mahama's play to the gallery of such incompetence, as usual. It therefore comes as no surprise when instead of cracking the whip he has rather reshuffled these ministers. It is baffling to fathom the cognitive processes Mahama's administration goes through to make a simple decision. How can you demote incompetent sports ministers and place them at the office of the presidency? Is Mahama's office of the presidency the bottom rung for the most corrupt and hopelessly incompetent folks?

Mahama is as guilty of corruption as his ministers. From their standpoint, Ghana's participation in the World Cup was another platform for the facilitation of another Ponzi scheme to further drain the public kitty and worsen the plight of Ghanaians. It is so sad that while the average Ghanaian faces the hardships of daily living under Mahama's government, Mahama's ministers and coterie of friends were going to Brazil on a spending binge on the back of the tax payers' money.

Indeed, the John Mahama/Amissah Arthur government is in disarray in full glare of the public, and the recently relayed 'Free Sanitary Pad' policy is evidence to that reality. It is utterly outrageous that in the midst of 'dumso-dumso', high taxes, rising fuel prices, and sky rocketing unemployment numbers, John Mahama (aka Papa BORROW-BORROW) would still go and borrow a $156 million World Bank loan facility, of which hundreds of thousands of dollars will be used to embark on distributing free sanitary pads. The information we are picking up from reliable sources indicates that the sanitary pads, which are yet to be distributed, are highly infested, untidy and unhealthy for our females.

Moreover, it is utterly unacceptable that $15.9 million from this loan facility has been budgeted for 'capacity building' within the Ministry of Education to monitor and evaluate the disbursement of the loan facility. Now, the question is what capacity building at the Education Ministry comes at a cost of over $15 million to the taxpayer? Lord God have mercy on us! This is a blatant and sinister move to divert such monies into private pockets, and fund their campaign, which eventually will be borne by the hapless Ghanaian.

We are asking very pertinent questions on certain fundamental problems in our education sector; where are the 200 Senior High Schools that Mahama promised? Where are the 10 teacher training colleges?, One -time NHIS premium, free shoes for school kids?, free school uniforms? Nothing to show! This guy Mahama is just a wicked liar with no modicum of honesty. All he knows how to do is to fob off!

As we write, there is even no chalk in some schools; capitation grants and school feeding programs are in debt; GETFund is unable to service its debt to contractors who provided service over the years, and whose businesses are now in limbo. NHIS has collapsed. Incentives promised to rural teachers as a source of motivation has been a hoax. Subventions to teacher trainees in colleges have been removed. So why will Mahama in the face of all these basic problems delve into a 'sanitary pad adventure?'

Indeed, John Mahama seems to have lost it. His conduct as head of government now makes him appear clueless, leaving our dear country as a rudderless ship on the stormy seas.

Ghana deserves better. The NPP must be brought back to govern.