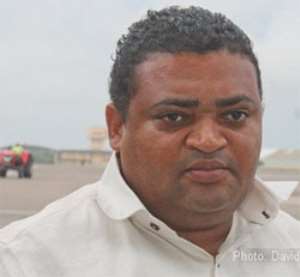 'If we are to take supporters to Brazil,  I will say without a shred of doubt that majority of those supporters  will be members of the NDC' - Joseph Yamin, Deputy Minister of Youth And Sports.

Undoubtedly, football is the passion of the nation called Ghana.  When the Black Stars engage any country in a football match all Ghanaians, irrespective of their political leanings, throw their weight behind the team.  Anytime the team loses a match you can easily see sadness written on the faces of Ghanaians.  Similarly, when the Black Stars win a match joy is written on the faces of Ghanaians - rich or poor, old or young.

When the Black Stars beat the US in the 2010 World Cup, a certain mad man in Kumasi took to the streets in jubilation, singing one of the songs which was composed for the boys to the surprise of everybody. Because the team is made up of boys from different tribes in Ghana, we throw tribalism to the dogs when the boys are on the field.

In fact, it is when the Black Stars are on the field playing a match that you see the total unity of purpose of Ghanaians.  The Black Stars team, to Ghanaians, is like the Ashantis and their Golden Stool.  The two, like conjoined twins, are inseparable.  Even at times like this when Ghanaians are reeling under economic hardships, people refuse to be distracted when it comes to the issue of the World Cup and the fact that the Black Stars are also participating.

That is why Ghanaians see anyone who tries to play politics with the Black Stars as a devil incarnate.  With an unbridled mouth, Joseph Yamin, the deputy minister of Youth and Sports has destroyed all that has taken years to cultivate:  a united people in love with a single team.

When I listened to him spewing out the abovementioned rot on air, I nearly hit my head against a wall. The guy was trying to be smart but sadly he was not clever enough. His was a typical example of putting a square peg in a round hole and another clear example of inexperience.

The reason why this country is facing difficulties is that the NDC government has brought onboard inexperienced young men and women who know nothing but only shouted at political rallies with the hope that they too would be recognised and offered a job when the party came to power.  You don't expect such people to perform well when they are put in charge of a ministry.

My late old man used to tell me that I should not look into the face of anyone and tell them they are foolish. He said instead I should tell the one to look into the mirror and see how a foolish man looks like. If Yamin was a wise politician, he will not have made that statement at all.  Was it not the same deputy minister who told the Black Stars players during the qualifying series in 2013 that the boys should win to ensure that the NDC scored higher points against the NPP?

Small boy, not all the truth is told in public.  King David in the good old Bible had gone in for the wife of Uriah, a soldier in David's army and Bathsheba, the wife of the soldier got pregnant.  He also made sure the soldier was put at the forefront of the war, where he was killed.

The almighty God of Israel revealed the secret to Prophet Nathan but Nathan did not say it in public even though in those days prophets like Jeremiah and John the Baptist could boldly reveal everything God told them in public.  Prophet Nathan surreptitiously went to King David in his privacy and told him what God told him about the wife of Uriah and the pregnancy.  He also revealed to him the punishment that will befall him because of what he had done.

Yamin is not clever, and from all indications the boy is suffering from incurable infantile disorder.  The NDC could ferry even 1000 supporters to Brazil without the knowledge of Ghanaians.  If NDC supporters were sponsored to pick a plane from let's say Togo to Brazil to watch the World Cup who would have known about it?

No wonder our elders say children know how to run but they do not know how to hide.  When you chase a child in the house, he will run into a room and hide behind the door even though the door is not closed.  That is Yamin for you!

Today because of what Yamin has said, the spirit of the whole nation is not with the Black Stars as they try to conquer the world and bring honour to all of us.  In fact, today we have NDC Black Stars instead of Ghana Black Stars and anytime we see the Ghanaian cheering squad at the stadium in Brazil we will easily recognise them as NDC supporters but surely not Ghana Black Stars supporters.

Yamin was born too late to understand where the Black Stars team came from.

In Ghana we used to see the Republicans FC as a national team because it was the brainchild of Osagyefo Dr. Kwame Nkrumah.  When the Ghana Black Stars team was later born, we saw the team as a national asset and as such the team needed our collective efforts to make it grow from strength to strength.

Ghanaians have religiously followed the Ghana Black Stars with all their hearts and minds. Muslims, Christians and worshippers of traditional deities have all been praying for the Black Stars anytime they had an engagement.  Before the Black Stars flew to Brazil for the current World Cup assignment, politicians from all divide sent them goodwill messages.

Yamin's comments have spoiled the day for our imminent citizens who saw the team as a national symbol.

And you, Elvis Afriyie Ankra, stand up and answer the following questions before I use the cane!  Did you say the 500 NDC supporters in Brazil were sponsored by some corporate bodies but not the taxpayers' money?  Will you kindly mention the names of those corporate bodies so that we will all thank them for their benevolence?  How much did each contribute and how much did it cost for the 500 grassroots supporters of the NDC to fly to Brazil?

Couldn't that money be channeled into the construction of the dangerous road from Makyinimabre to Fankyenebra where they cultivate plantain for you and your wife and children to buy in Accra and pound your morning fufu which I learnt you enjoy so much?

An octogenarian former  soldier who was in Congo when  Patrice Lumumba was assassinated and who has been smoking cigar for the past 50 years has advised me to change from smoking  Havana Cigar anytime I am angry and rather go for hand-rolled Belicosos Finos Cigar and also make sure I light it up with matches instead of a lighter.

According to him in order to have a good flavor, Belicosos Finos Cigar goes with matches. And so here I go: PUFFFF!!!