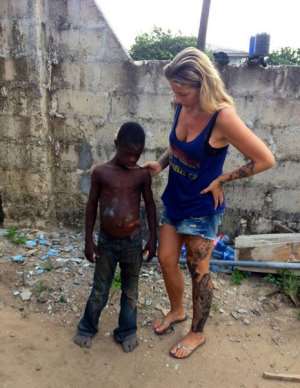 Last week, I posted a comment on the Yahoo listserv, AfricanWorldForum, TalkNaija, HardTalk and in particular my Facebook page about the documentary I watched via the Facebook of a Danish charity worker, who is based in Nsit Ubium Akwa Ibom State, Ms. Anja Ringgren Loven. The video captured a little boy, simply called Precious, who was badly burnt with fire in different part of the body on account of witchcraft accusation. It is a video you will not like to watch. They called them Nigeria witch children; not Akwa Ibom witch children.

There're other children, a good number of them in the website and Facebook page of the lady's organization, Dinnoedhjaelp, the name, though hard to pronounce in English, even writing it is a difficult task. Though interpretation is available in some Bing and Google translations to mean 'Your aid' or giving help, it may mean more than this.

Perhaps, I wouldn't have been able to have access to it but a friend of mine, Nielsen, from Bornholm, drew my attention to it and the major documentary that is about to be launched in their regional and international TVs also noted that his sister who lives in a different city was also contributing monthly to the organization to support children in Nigeria. It became an issue in our place of work and members of staff in our hospital discussed it. The video was shared hundreds of times meaning that more than ten million people watched it and equally contribute money and materials to help these hapless Akwa Ibom children.

When I shared the video on my page, and asked what is Akwa Ibom government doing with the huge monthly allocation? One government apologist jumped on my neck and asked if my state doesn't have her own problem. Of course, I told him different states and countries have their own social crisis. But the governors or the man at the helms of affairs always moves to address it. He jumped again to announce to me that the governor passed the child right bill into law. I again asked if that has ended the child witch killing in Akwa Ibom? He said, of course. I told him he was lying through his teeth just like his governor. It was there the conversation became ruffled as other folks jumped on him, and he too curried favour from his fellow Akwa Ibom government defenders. But some nice friends from his state quickly pointed out to him that children are still being tortured, abused, abandoned and killed yet the government only deemed it wise to chase and attack all the children advocates and human right activists there, including the media outfits that dare to report such.

The question is, can Akpabio save us from his own madness? Let Akpabio know that, every family has its mad men. A Yoruba proverb says: “Ologbon ebi lo ma ti were re mo Ile nitori abuku, sugbon omugo tu tire sile lati ma kan eniyan labuku” ....Only the wise family will keep mad men indoors to avoid embarrassment; and only the foolish let theirs roam the street to embarrass people. Akpabio is no less in conformity of this Yoruba adage.

In November 2008 the entire world was jolted into a thunderous shock when a documentary, “Saving Africa's Witch Children' was aired in UK. It showcased the Akwa Ibom and Cross River State witch children. Since then, much has not been heard of children of Cross Rivers in this mess, but Akwa Ibom. Governor Akpabio and his commissioner of lies, sorry information, Mr. Aniekan Umanah have continued to bleed lies to the entire world that there's nothing like child witch torture and killing anymore in Akwa Ibom. Sometimes, Umanah will even say, they're children from Gabon. Sometimes too I thought he needs psycho evaluation. In any civilized clime, Umanah would have been forced to resign because his mouth knows no language other than venom of lies. But I learnt he's the one who normally announces the disengagement of other commissioners whom he plots to eject.

Some of his apologists would to say I am being hired to release a diatribe, on Akpabio. And ask, for what? My major concern is that, Akpabio should save us from this national and trans-border embarrassment. If he's able to address the child witch issue, international charity workers would not have come to Akwa Ibom to bring embarrassment to us.

That Boko Haram has taken the front burner in Nigeria, it should be noted that Akwa Ibom child with palaver remains a burning national and international embarrassment.

There should be no excuse of a leprous free education or child's right law passage claims to solve the child witch imbroglio in Akpabio's Akwa Ibom. If it had, the influx of volunteers and charity workers from different part of the globe would have been a thing of the past.

There's no doubt that Akpabio is one of the secret worshippers of some of the bamboo churches in his home state. These are churches that are found in all the streets, no matter how short or small. One wonders why the proliferation of spiritual bamboo churches has taken over the streets! You could quickly think that it's because Akwa Ibom people are so close to God than any other state. Far from it! The geometric progression of churches here is due to extreme poverty instigated by lack jobs and zero industries in the state. Can anyone point to any viable industries in that Akwa Ibom state?

When Akpabio came to power in 2007, many thought that because of his background as a child from a single mother, he will deliver the democratic dividends to his people and help solve the children crisis like never before. But the stark reality is that, Akpabio will leave his state in the next eleven months poorer than he met. Does anybody doubt this? If you ever doubt this, kindly point to one industry that Akpabio's government has established or revamped since he became the governor! It is not enough to embark on elephant projects everywhere which will be left incomplete at end of his tenure. And he calls his government uncommon transformation. I read in one of the online blogs and a non-mainstream media that it is rather "uncommon poverty." It's poverty that has triggered off all the fake and phantom spiritual churches burgeoning Akwa Ibom of which the proprietors capitalize on the ignorance of the poor people of this state to defraud, and even kill to survive.

Recently, Mrs. Helen Ukpabio of Liberty Gospel Church was deported from the United Kingdom because of the threat she poses to children with her stigmatization and wild exorcist activities which children either dead or traumatized for life. The UK government views her as a big threat to children. This is as a result of the guts of rational thinking government of that country. But in state like Akpabio's Akwa Ibom, such malevolent thinking women are worshiped and given awards, money and preferential treatment if not red carpet.

If Akpabio likes, he can order all the fraudulent prophets and pastors to label children as witches, kill them because of his administrative ineptitude and dearth of vision; as his soul focus is on siphoning the revenue allocations, as his face and heart only capture the 30 billion monthly allocations with nothing to show for, while states like Cross River and Edo which receive five to six billions monthly are making theirs a pride abode. But Akpabio should spare those of us who live in foreign soils his own madness as we have ours. Akpabio should let us heave a sigh of relieve with his news, pictures and video of tortured and killed witch children every day.

Latest Photo Reports
Catch up with all the political quotes from our politicians.
Advertise here
More Opinion
ModernGhana Links
Your pride won’t feed us, Mr. President
Nurses should break the frontiers to change the Professional Status Quo
Consequences of uncontrolled distribution of humanitarian and military aid in Ukraine
Religious profanity versus civility
The Right Political Choice And Trajectory For Ijaw Nation
Protecting Migratory Birds in Africa
The Train Is Coming - Part 2
Manasseh should render an unqualified apology to President Mahama on the Ford saga
Togbiga Wenya, the Leader and Ruler of Dogbos before Sri was born. And other matters
TOP STORIES