Mahama's NDC - The Poor Gets Poorer, The Greedy Bastards Get Greedier (1) 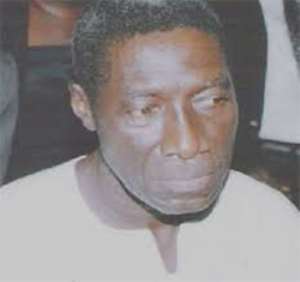 Every thought, every action, every move, every act of commission, every act of omission by any citizen, no matter the good intention behind it, is seen in the green lenses of partisan party politics.

In the midst of all these changing signs, the greedy bastards, who have captured the strategic state institutions like Parliament and the Judiciary to satisfy their gluttonous obscene lifestyle, are getting greedier and greedier while the poor masses and the wretched of the earth, no matter their political and tribal colours, are getting poorer and poorer.

The great mass of poverty, which has been visited on this country by the corrupt, greedy and incompetent John Dramani Mahama NDC administration, has infected all the persons, who do not belong to the inner caucus of the looting brigade, which has specialized in creating instruments of corruption like judgment debt, SADA, GYEEDA and 'Ghana For-Thieves' alliance.

As a result of the corrupt and incompetent manner in which the nation's economy, in particular and the social structures in general have been managed by the current Mahama administration, the local currency has been 'running like Usain Bolt' or drugs infested Ben Johnson of old.

Everyday the citizens wake up to new pricing regime, which has consistently eroded their purchasing power. The citizens cannot resort to greedy and corrupt influences to balance their economic and social equations.

Parliament has lost its independence to the Executive. Parliament has become a toothless bulldog where meaningless debates are fashioned out to throw dust into the eyes of the suffering taxpayers whose taxes to fund an otherwise critical institution in any democratic dispensation.

Debates are very often allowed in Parliament on the whims and caprices of the corrupt Executive.

We have been made to believe by a deep-throat politician with massive influence in the corridors of power either rightly or wrongly that even some justices of the superior courts are bribable and therefore can be influenced.

It is a sad reflection of the failure of the independence project, which Kwame Nkrumah fostered on the nation at the time, for persons who retire on their salaries to throw away their formal and informal education, family background and conscience through the window and allow themselves to be influenced by Don Quixotic characters.

Despite all his achievement, Kwame Nkrumah cannot be forgiven for that one stroke of ill adventure which sent the colonial masters packing at a time when the county had no history of nation building and management.

This country does not appear to keep any records of its governance history. Every subsequent regime performs more woefully than the regime preceding it.

During the NDC regime of J.J. Rawlings, a battalion of advisors and political hang-on were sent in droves and waves to Singapore.

The NPP regime of J A. Kufuor repeated this adventure. However, there is no recorded history that the nation benefitted from the Singapore experience from the massive spending of the nation's money by the two regimes on the various trips. Today despite the combination of the history of both civilian and military adventures to draw on, this country under the corrupt, greedy and incompetent John Dramani Mahama NDC administration, has precariously placed the nation on the brink of economic bankruptcy, financial meltdown, social despondency, infrastructural decay, and worst still lack of self-belief even among persons in positions of trust and responsibility.

This country has never had it so bad. I do not have to be an anointed man of God to visualize that unless there is a change in the leadership of this country and a change in the direction of the nation, this country is going to implode sooner than later. This idiotic nonsense happening to us cannot continue forever.

Something is gona break. It is not the magnitude of the corruption being perpetrated by people in entrusted positions which just worry me but more particularly the impunity with which these crimes against the nation are perpetrated.

These criminals have self-belief that nothing can happen to them no matter the crimes they commit against the State and by extension the suffering masses of the people.

These criminals have come to adopt the axiom: 'Let them have their say, we shall have our way.' Indeed a classical case of the fool who said to himself, there is no God. Next time round, I can see that persons will not be tied to the stakes and shot. No the suffering masses will not have the luxury of the time. People will simply be beheaded in their beds as it happened in the Liberian situation. Indeed, we are already there.

Suicide bombers are created from dissatisfied, disenfranchised youth, who have been denied education and a share of the national cake, which they are entitled to, because of the greed of those in entrusted positions.

These youths have had their egos bruised and soon come to the conclusion that is not worth living.

They are easily convinced that heaven beckons them if they kill themselves while taking the lives of others with them.

These demolition exercises are very often supervised by the National Security personnel and sometimes on the orders of the courts, which have lost their shine.

The vacant plots created are supposed to have been illegally acquired by persons whose properties have been destroyed. That is one side of the statement of financial position.

The other side is that the order for demolition is often acquired by faceless investors, who intend to use the evacuated plots for the construction of (please note the terms) 'luxury high rise apartments', 'luxury terrace apartments' or 'shopping malls'.

The constructed apartments are sold in dollars, sometimes in advance before the actual construction even takes place to faceless customer, the income tax returns of both the sellers and the purchasers are not examined by the Ghana Revenue Authority or the Financial Fraud Office to find out the sources of income.

The schemes could be means of recycling illegal money or some form of money laundering.

The persons involved belong to the upper class of the society. The poor working class is not mentioned and completely forgotten.

Construction of low-cost compound houses has become a thing of the past and thus denying the low-income earner a rightful place of decent abode. They are left to sleep in uncompleted buildings.

Very often, only the cream of the society patronizes these shopping malls. So once again the wretched of the earth is left out of the scheme of national affairs. The snowball effect is that the poor is getting poorer and the greedy bastards getting greedier by the second under this despotic corrupt, greedy incompetent John Dramani Mahama NDC administration.

A mighty wind shall indeed blow, as predicted by Bambulu in the classic play: 'This Is Our Chance,' mark my words.

E/R: Body of missing Chinese man found in dam at Esaase
34 minutes ago