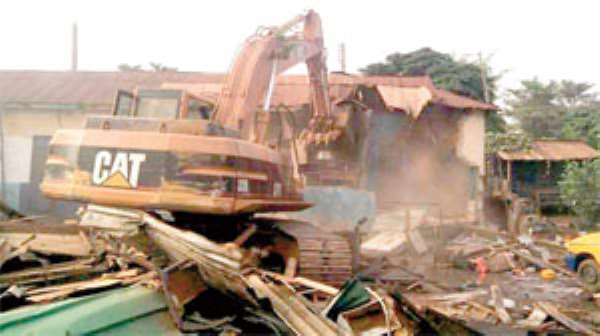 Over 500 structures belonging to mechanics and artisans operating at Tanokrom Kokompe, near the Takoradi Jubilee Park were demolished yesterday.

This was during an exercise by a joint police and military team to clear the land which had allegedly been acquired by a private foreign investor for the construction of a shopping mall.

DAILY GUIDE gathered that a South African company, Western Development Consortium Limited (WDCL), has purchased the 22-acre land at Tanokrom to develop it into a shopping mall and other ventures.

New site
The Sekondi-Takoradi Metropolitan Assembly (STMA), in collaboration with the South African private investor, purchased a 58-acre land at Kansaworodo, near Takoradi for the artisans.

The STMA indicated that artisans occupying the land, near the Jubilee Park, were squatters and so decided to relocate them to a new site.

Resistant
However, the artisans and the mechanics maintained that the new site allocated to them had not been properly developed and so they would not relocate to the new place.

They also said that due to a distance of about 14km between the new site and Takoradi, it would be impossible for them to work effectively.

The over 2,000 artisans and mechanics had vowed to resist any attempts by the city authorities to evict them.

Court order
However, DAILY GUIDE gathered that the private investor sought a high court order to demolish the structures.

The demolition exercise was supervised by personnel from the military, police and City Guards, led by DSP Gordon Kodua, Western Regional Commander of the Police Rapid Development Force (RDF).

The paper learnt that as early as 4am, the police and the military surrounded the area.

When DAILY GUIDE
got to the scene at about 8am yesterday, over 50 structures had been demolished by a taskforce, who stormed the area with bulldozers.

Containers and wooden structures were completely destroyed by two bulldozers.

Wailing
Some of the artisans wept uncontrollably during the exercise.

The level of destruction shocked many of them who accused the government of being insensitivity to their plight.

Most of the artisans said STMA was not humane in the execution of the exercise, stressing that the assembly should have given them some days to clear their structures. Some mechanics, who got information about the demolition exercise, managed to convey their property to other locations.

The Contractor
Later in an interview, Peter Kow Obosu, a contractor with the Peekob Company Limited, which is constructing the shopping mall, said the 58-acre light industrial enclave at Kansaworado, a suburb of Takoradi, was ready for the artisans.

He said there were amenities such as water,
electricity, toilet facilities, among others, at the place to enhance their operations.

Takoradi woman confesses she was not pregnant
40 minutes ago