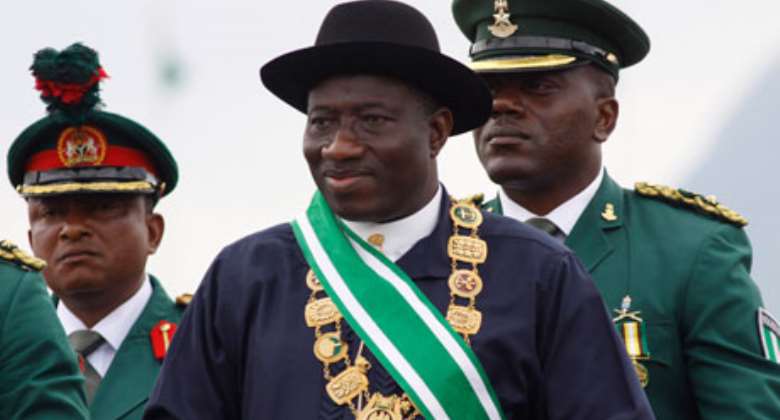 Every man, every woman who has to take up the service of government, must ask themselves two questions: 'Do I love my people in order to serve them better? Am I humble and do I listen to everybody, to diverse opinions in order to choose the best path?' If you don't ask those questions, your governance will not be good.---Pope Francis I

NOW I KNOW IT IS TOO LATE FOR YOU

With so much pressure mounted on me by the Nigeria and International media do I write to you once again before the year end. May I let you know that I received your letter, even though addressed to me, but was read first before me by the public through the media. Even the attempt by your Media S.A to use my daughter against me was also gotten. I do not have issues with since you claimed mine never got to you first before the media published.

Mr President, in less than eleven hours from now, you and I will be shouting 'Happy New Year' and will even exchange text messages and call each other, but I have deemed it fit to send you this last message before you and I will shout the ritual shouts of joy. It doesn't end there that the new year is very close, but it's also my pleasure to tell you that in less than 70 days of 2014, I will be 77 years, a year which crossed the biblical three scores and ten, and thus should not be afraid to speak the truth even if it hurts. And you may not easily remember this, but 2014 will make you 57 years of age, a year which you were born-1957. From all available calculations, I am older than you with 20 years, an age ripe enough to father you; hence this letter is like a message from a father to a son and not as an ex-president to a sitting president like you alluded in your reply to me.

Be that as it may, your reply jolted me back to reality that I made a mistake in the title of my last letter to you – 'Before it is too late'. I just realized that it is already too late for you to make amends. Very few leaders make positive things happen within two years of leadership and you are obviously not in that category, as you have less than fifteen months to hand over the baton, except you wish to contest again, which will be a breach of the personal vow you made not to run. Let your conscience be your judge on that. I wish to now answer the posers you raised in your reply to me.

Joe, you raised the issue of Boko Haram ravaging the North East being ravaged by terrorists and insurgents; and haven cross checked the eight years I ruled as President, there was no such record of such happening in my regime. A pilot has a co-pilot incase the plane is drifting afar and you were the co-pilot when late President Musa Yaradua held sway, and Boko Haram reared their ugly head which your regime has now made beautiful. Mr President, I wish to know like many Nigerians what advise you gave to your boss to stem the tide then, in private or during the Federal Executive Council (FEC) meetings. To put the blame of Boko Hara solely on Yaradua will be a great disservice to his memory.

As a matter of fact, Boko Haram was not prominent during Yaradua's regime; rather your kinsmen from the creek who termed themselves militants were the ones having a field day. It is these militants that your former boss dealt with which has caused us the current peace we enjoy in the Niger Delta as well as more inflow of cash which your Minister of Petroleum has turned to her personal fiefdom today, awarding contracts to her cronies, while she plans to sell of the refineries to them with your able connivance. If Yaradua could solve a problem in your region, it will be more honorable for you to do so to his region; that is what my people in Yoruba term as a fight of the dogs. As you admitted in your letter that I advised you to use the carrot and stick approach, I still maintain you do so. I regret to say that your approach has not been sincere enough.

You mentioned my military tactics against Odi, stating that it never yielded the desired result. Mr President, my invasion of Odi remains the best strategy to have used then, considering the fact that we were just entering democracy and all insurgence has to be quenched immediately. If I were to take the same decision again, I will take same and I have no regret in what I did. You referred to the attack on you in 2007 and I begin to wonder who was in control then. You were the Governor and had all the apparatus of state to effect arrest; even to apprehend innocent citizens and term them suspects were within your power, thus I see no reason why such should even come up in your letter.

I had my faults during my tenure but I never laid blames on the past leadership. For you to write that kidnapping and armed robbery began long before you became President is totally untenable. May I also remind your Excellency that I was not also the President then, but I didn't complain. My job was to reposition while yours is to consolidate, and to the best of my conscience; I repositioned the country to the path of democratic rule where the Soldiers have been perpetually kept in the barrack.

You claimed that I am aware of prosecuted corrupt officials by this regime, but I am sorry to say that I am completely ignorant of any corrupt public officials that you have jailed. They are not hidden Mr President, as they abound around you. What is Stella Oduah still doing in the Aviation Industry if truly you are prosecuting them? Why is Diezani Alison Madueke still doing her beauty pageant show close to the Oil sector if you mean your war against corruption? Do I need to mention your Attorney General, Education Minister or the Minister of Niger Delta Affairs amongst sundry others? It is no longer news that the EFCC has become a toothless bulldog under your watch. I may be accused of being selective in those they prosecuted but that is a tale peddled by the media by my then political opponents. Nigerians wish to see those selected corrupt few who will be jailed.

Joe, I did not mince words when I wrote that you are sinking the ship of the PDP. Since your ascension to the throne of Aso Rock, our party fortune has nosedived. None of the governorship elections held under you has seen us coasting to victory; rather you dine with the opponents. It is my belief that you agreed with my letter on this, hence our party is standing solidly behind our candidate, Tony Nwoye, to challenge the Anambra guber election in court. I do know that it is all to the gallery as nothing good will come out of it. In PDP, rigging is the game and you cannot claim to be unaware of it. How did you get into power if we didn't rig you in? Do I need to remind you that your home state which produced your 'house boy', Seriake Dickson was rigged? It makes no sense claiming a saint when you are a product of what you condemn.

Your Excellency, the most virtuous prize for statesmen is honor. You did not just tell me that you will not contest the 2015 election, but told other governors. Before my letter was written to you, many governors have told the public that you made the pact with them to run for only one term. While it is your right to run again, I wish to remind you that at my age I will not lie, especially not against someone young enough to be my son, more so you are my protégé. It was you promise to me to lead for one term that made me announce to Nigerians that they should vote for you, as you have promised to run for one term. The video footage of the rally where that statement was made is still available for you to watch. Let me now be the liar before Nigerians, but let God be the judge.

I do hope that in the coming year, you would have looked into the last letter I wrote to you and make amends, especially concerning our political fortunes. You have two chances to redeem the party from losing the 2015 election, which is to win the Ekiti and Osun States governorship election coming up in 2014. Mr President, your opponents in those states will be planning to rig as well, and it will be foolhardy for you to believe that mere going to present the flag to our candidate is enough to win the election. Remember that they are the incumbent, but also have a flash back that we did it in 2003 in four South West States with the exception of Lagos where we swept way the incumbent. I need not teach you the tactics, as you have practiced it already in your home state. Sir, snatch the victory in these two States and send a message for 2015; then let them approach the tribunal for court victory which if well played they can never get.

Before the year ends again; I wish to apologise to Nigerians for imposing on them wrong Presidents who have not tasted what they voted for, and while it may be too late for you to make real positive impacts on the common man like we did with GSM, you can begin tackle one serious and pressing issue which will keep you in the minds of Nigerians for long; something tangible that they can see to forgive your numerous sins. They are easy people to handle and please with a forgiving spirit; this you and I know. As it has become customary, I will also leak this to the Press. The first one written to me by former EFCC Chairwoman, Waziri was leaked to Elombah.com and the next one was leaked to Premium Times, but for this I am yet to decide who will get it first.

As you cross over to the New Year, Mr President, I wish you a more eventful New Year devoid of Occupy Nigeria.

Please accept the assurance of my highest consideration to your office and warmest regard.

NOTE: This is a satire and an imagination of the reporter