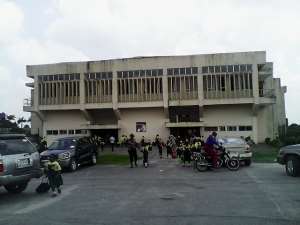 …WHILE ZONAL MANAGER RAKES IN MILLIONS FROM THEIR SWEAT

…WE ARE IN SOWETO – TEACHERS CRIES DAILY
Against the backdrop of a communiqué issued by the Federal Ministry of Employment, Labour and Productivity on 20th January, 1992, directing all oil companies in Nigeria, NNPC inclusive, stating that all casual/contract staff should have their appointment regularize and unionization of all contract staff of labour contractors, we can authoritatively report that 21 years after that decree was issued, the NNPC has not only failed to keep to it, but also carried out more obnoxious activities likened to the days of Soweto in South Africa.

One of such NNPC office which practices this abominable act is the NNPC Zonal office Warri, where our reporter took out time to investigate the happenings in the sector. According to documents obtained by us, one of the Strategic Business Units (SBU), which is the NNPC Staff School located inside the staff quarters has been in the practice of employing contract staff since 1988, with the recent one done in 2008.

The staff which are known by various names such as temporary staff (TEMPOS), casual, contract, Support Staff and labor supply are currently living and working in bondage, as we authoritatively gather that all their years put into the service of NNPC are not rewarded with any pension or gratuity. They retire with only the salary paid for that month and go home empty handed, where most of them died due to frustration.

The contract staff which are in the employ of NNPC Warri is not recognized in Nigeria, haven been asked to stop, but a smart move which has been uncovered by us reveals that prior to the communiqué issued on 28th January 1992, the then NNPC Zonal Manager haven gotten wind of what was to come in the communiqué, hurriedly invited a contractor known as Lighthouse Engineering Company Ltd and signed a contract with them, handing over all contract teachers to them, leaving out other contract staff in other SBUs.

In the document obtained by us with reference number – NNPC-ZOW/0026, and dated 16th January, 1992, the terms of agreement stated that Lighthouse will “arrange and provide the Warri Zonal office with skilled and unskilled labour as and when required”. Information available to us reveals that since this anti-labour stance was signed against the law of the Federal Government of Nigeria, the contract staff who are Universities and Polytechnics graduates have been on a static salary of N55,000 for the past four years, which was increased this year with 5% despite teaching for maximum of 25 to 3 years.

According to an impeccable source who spoke to us, the contract staff teachers have been prevented from joining or forming any unions that will fight their cause, while the Zonal Office led by the current Zonal Manager, Mr. Olegunleko Bola. A. has frustrated every move made by Journalists and Labour to bring the case to the public domain and stopping it, by doling out huge sums of money to them.

Documents obtained by us reveals that the dehumanized teachers have written several letters to the Federal Government, Nigeria Union of Teachers, Senate Committee on Education, Senate Committee on Oil and Gas (Downstream), Nigeria Labour Congress (NLC) and the various Group Managing Directors (GMDs) who have headed the corporation. One of such letters written to the Senate President, Senator David Mark on 26th April 2010, with the heading 'SAVE US FROM HUMAN BONDAGE” detailed how they have been treated like slave laborers working for a paymaster, which Lighthouse represents.

Another of such letter written to the Honorable Minister of Labour and Productivity on 19th October, 2010 revealed that in December 2003, they attended a conversion interview in Abuja and by 2004 when the results were released, only 5 of such casual/temporary/contract/support/labour supply staff were converted to permanent staff and they were all relatives of the management staff in Zonal Office. A letter dated 14th June, 2005 was released by the NNPC management stating that One Hundred and Twenty-Two (122) casual staff had been offered letter of permanent employment, but investigation carried out by us reveals that none of the support staff teachers as they are called were beneficiaries of it, while the beneficiaries were mainly family members of NNPC management staff from the NNPC Tower House as well as other 'Ogas' in Zonal offices.

INVOLVEMENT OF PAYMASTER AND THE SUBSEQUENT SLAVERY

The contractor, Lighthouse according to our investigations take directives from the Zonal Office in Warri in his relationship with the support staff who ordered that they do everything possible to make sure that the teachers are enslaved and not allowed to know the exact benefits accrued to them. The owner of Lighthouse, One Mr. Bamidele sends his son, Ayo, to come to the school to deliver the cheques to the support staff at the end of each month, a vivid reminder of the slave trade era. We also gathered that when all the teachers were finally asked to open accounts, their paymaster ordered that they open only with Sterling Bank (Formerly ETB), where he delays the payment of their salary for over a week, when it must have yielded interest for him and the NNPC Zonal Office.

A reliable source in Lighthouse who spoke to us stated that the teachers who are newly employed as contract staff are suppose to collect a minimum of N180, 000 home as take home pay, while those that have been in the school for over 20 years should be smiling home with minimum of N750, 000 monthly, including all benefits but Lighthouse and the Zonal Office purposely cut the money to a flat rate of N55,000 regardless of your qualification and year of employment. In 2009 during a meeting which is called 'village meeting', Mrs. Lillian Adegbite (Rtd), who was a top management staff we gathered told the support staff that the NNPC headquarters have mandated them to pay them 10% yearly increment, but the NNPC Zonal office refused to implement the order. In July 2013, following the pressure mounted on them, they were forced to pay only 5% of the increment, without backdating it.

A meeting with the teachers which we were in the know took place towards October 2013 led to a shocking revelation by the CEO of Lighthouse, when he asked them to sign for November salary that they were yet to be paid, but they refused. A spy reporter who feigned to be among the teachers in the meeting reported a shouting match between the support staff and their paymaster. When asked why he has not increased their salary since NNPC claims that they are not the corporation staff, Lighthouse revealed that his company is not their employer, but NNPC, stating that they are only a third party. On the issue of the continuous suffering as slave workers for NNPC, Mr. Bamidele revealed; “It depends on the management in your Zonal Office that will make me pay you your desired salary. If I tell you that I no longer get my normal percentage that I used to get during Babangida (former head of state who was in power then or apparently the Zonal Manager then) time, you won't believe it. This present management is taking most of the money. That is why you see me not paying your salary on time, because NNPC is owing me enough percentage. The truth is that the management on ground will determine how you will be fairly treated, whether you will get all your salary, 13th month salary, Christmas bonus and all your benefits”.

As a replica of apartheid, the teachers are not allowed to talk to strangers without harassment by the school management who feels that they are out to expose them. Their movement in group is also questioned by the Head Mistress, Mrs. Momoh P.O who feels that they are planning to mobilize. According to an impeccable source among the few permanent teachers, the Headmistress has been mandated to suppress the contract staff and weaken their morale in the school, which she has successfully done for years. All visitors who come to see any of the slave teachers we gather have to go to the Head Mistress to say his/her purpose of visit before he/she is allowed to see the teacher.

Calls place to Mrs. Momoh were answered rudely, asking to come over to the reporters base and see any copy of the report and who signed it before she can answer any of the questions posed to her. “My friend, who signed the report with you? Come over and show it to me or I can come over before I can talk”, she said. When prompted to answer the questions on phone, she hung up. When another call was placed to her, she simply said and threatened, “You are not a serious Journalist, if you cannot come over. If you call me again…hmmm” and she hung up.