Like Parliamentary Democracy, Roundabouts Are A Great British Export With A Risk 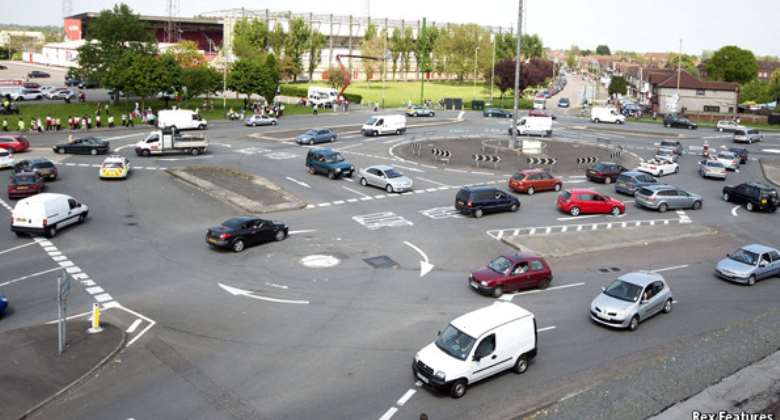 BRITISH inventions have done more to influence the shape of the modern world than those of any other country. Many—football, the steam engine and Worcestershire sauce, to take a random selection—have spread pleasure, goodwill and prosperity. Others—the Maxim gun, the Shrapnel shell and jellied eels—have not.

Others still—modern atomic theory, the bagpipes—are capable of doing good, but in the wrong hands can have dreadful consequences. It is into this category that a British invention currently colonising the world falls.

First introduced in Letchworth Garden City in 1909, the roundabout—a one-way gyratory built for road management not to circumvent a monument—proved so popular in Britain that in the 1960s the Transport Research Laboratory developed a miniature version.

It reached its apogee in Swindon's “Magic Roundabout” (pictured): one large roundabout surrounded by five mini satellites. The UK Roundabout Appreciation Society celebrates this gyratory ballet on a set of exclusive place mats.

The society's coveted “Best Roundabout of the Year” title is currently held by one in York with a windmill on it, which beat a rival with a duck-pond in a closely fought contest.

As so often happens, others are following where Britain led. In 1997 there were 30,000-40,000 roundabouts around the world; now there are 60,000. Half of them are in France: the French were early converts to the rond-point and have taken to it with a passion, perhaps because it offers conspicuous opportunities for the country's notoriously competitive municipal gardeners to vie with neighbouring rivals.

America is catching up fast; numbers have grown from a few hundred to 3,000 in the past decade. They are now common across Europe and have spread from the rich world to the developing one (see article).

For reserved Britons, the roundabout represents not just a clever solution to a common inconvenience, allowing vehicles to swirl rather than stop at empty crossroads, but also the triumph of co-operation over confrontation. Vehicles and the people in them do not need to go head-to-head: if everyone bends a little, everybody can get along. Studies show that they are justified on pragmatic, as well as philosophical, grounds. According to America's Department of Transportation, replacing crossroads with roundabouts leads to a 35% fall in crashes, a 76% fall in injuries and a 90% fall in deaths.

Yet roundabouts tend to work only when motorists observe the British virtues of fair play and stick to the rules. Alas, this is not always the case.

Mother of all traffic jams
If drivers do not yield, roundabouts degenerate swiftly into gridlock. And in places where driving standards are poor, people often plough straight onto them. In Nairobi, for example, the four roundabouts that mark the city's heart are so badly jammed that policemen have been drafted in to act as human traffic lights. When it rains, the officers seek shelter and the mess gets even worse.

Even when drivers are not to blame, the roundabout can spin out of control when transplanted to an environment less sedate than Letchworth Garden City. In very heavy congestion, of the sort that plagues many emerging-world cities, roundabouts tend to make things worse rather than better, particularly as they are often misguidedly built at the busiest intersections. Where there is no street lighting, a particular problem in Africa, drivers are likelier to make a mess of negotiating them. For cyclists and pedestrians, who are more numerous in emerging countries, roundabouts tend to be more dangerous than traffic lights. Corruption exacerbates the problem, in more than one way. In many countries drivers obtain their licence through bribery rather than proficiency and so are ill-prepared for the roads.

The fate of roundabouts abroad thus repeats in miniature that of another British export, parliamentary democracy—another fine idea that backfires when mixed with jiggery-pokery. Just as democracy tends not to work without a free press, an independent judiciary and other helpful institutions, so roundabouts need decent drivers, straight police and reasonable infrastructure to function. The lesson of both is that fine ideas can wind up looking naive if they take no account of context and history. Swindon wasn't built in a day.