Via Lampedusa to Berlin streets, a Ghanaian migrant's odyssey 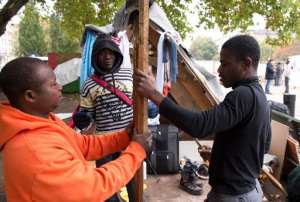 Berlin (AFP) - In his makeshift shelter, Johnson Takyi from Ghana who arrived in the German capital via Italy's Lampedusa island, sadly recalls how he warned his younger brother not to follow in his footsteps.

"I had said to him not to come. I used to say to him there was no work for us in Europe and that we'd find ourselves sleeping in the streets," the 43-year-old told AFP.

But his brother, nine years his junior, decided to take his chances.

"He drowned, he was on board the boat" from which well over 300 migrants drowned near Lampedusa, the closest European island to Libya and Tunisia, on October 3 in Italy's worst ever refugee shipwreck disaster.

Italian officials, questioned by AFP, were unable to confirm or rule out the death of Takyi's brother in the incident.

Two years earlier, Takyi had taken a different makeshift boat from Libya to the tiny island.

"I had been working for six years in Libya but during the fall of the (Moamer) Kadhafi regime they accused immigrants from Africa of being on the side of the dictator's regime," he said, helped with his broken English by a local councillor of Germany's Greens party.

He was bundled on to a boat in the dead of night with around 100 other Africans and, after they arrived at Lampedusa, spent 12 days in a camp.

After that, he said, the Italian authorities sent him on to another region.

"In Libya I was a carpenter and I earned enough money to send some to my family," he said. "I didn't want to come to Europe."

Seated on thick blankets which serve as a bed in the damp less than three-square-metre (10-square foot) shelter he made himself out of plywood in a Berlin square, he slowly recalls his voyage across Europe that led him to the German capital six months ago.

"I got a residence permit for one year and eight months in Italy," he said.

That gave him the right to travel in the 26 European member countries of the visa-free Schengen zone.

Without work, he decided to head to Germany, Europe's biggest economy, after, he said, Italy gave him 500 euros ($678) to go elsewhere. "In Berlin I initially walked the streets until I met someone who brought me here," he said.

'Here' is a "refugee camp" made up of tents offering little protection from the cold or heavy autumn downpours on a square in Kreuzberg district, the centre of Germany's large Turkish community.

Refugees, mostly people from Africa who came via Lampedusa, have been camping at the spot for a year demanding to be granted political asylum, among other things.

Berlin city hall has recently pledged to find them a roof over their heads for the winter.

Takyi's shelter, which lacks running water but is impeccably maintained, has blankets hanging along the sides for insulation.

"But we no longer have showers and the mobile sanitary facilities are no longer in a good state," he said.

Takyi survives with the help of charities and donations of clothes and food. But despite having to tough it out in harsh conditions, he says he has no notion of returning to Ghana.

"I want to work and earn money to again be able to send some to my family," he said.