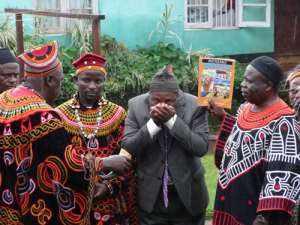 The 31 fons (traditional chiefs) who rule over the 29 villages in Meta' met in Mbengwi to reflect on unity and draw a road map for the development of Metaland. This was under the auspices of Meta Fons Union (MEFU) in their annual general assembly.

The meeting was chaired by Fon Njokom of Mbengwi, president of MEFU. The fons identified lies, greed, non-respect of traditional protocol, land disputes and translocation as the causes of disunity among Meta fons.

According to Meta fons, before a new fon comes to the throne, regents during the interregnum would have already told lots of lies to pretenders to the throne. The new fon then ascends to the throne on a platter of lies. These lies pollute his mind about people he is supposed to consult for an effective rule of his people.

Most fons took the floor to condemn what they term translocation of fons. By this, they accused some fons of encroaching on lands belonging to other fons. This action provokes animosity among fons. Some of the fons guilty of translocation influence the administration of Mbengwi with incentives to bend the hands of justice in their favour.

Dr. Greg Fombo, fon of Njindom called on Meta people to unite around needs and projects. According to him, if the people could identify a need they wished to satisfy, it would be easier to come together and achieve it.

Fon Azah of Ngwokwong said fons were no longer created and the administration should desist from creating new fondoms (chiefdoms). This is in reference to the recent decision by D.O. Aminkeng Charles of Mbengwi to enthrone Mukam Ndengum Henry as the fon of Munam.

Munam is the farmland of the fons of Nyen, Njindom, Mbemi, Wumnebug and Ngundom. In a terrible conspiracy, capable of provoking a tribal war, D.O. Aminkeng entertained the application of Mukam Ndegum Henry to be enthroned as Fon of Munam. This met with stiff resistance from Fon Fominyen Ngya II and Fon Fomuki PM of Guneku.

Fon Azah said the national gazette of 1965 should be referred to for a list of fons in Meta and the North West region of Cameroon. Fons are hereditary and not appointed by the administration in the North West Region. Traditional chiefs are appointed in other parts of Cameroon, but not in the North West where the custodians of the people play a divine and ritual role that is not conferred by appointment.

Fon Banung of Chup decried the despising of traditional avenues of justice. He wondered why Meta people chose to feed bias and interested administrators instead of resolving their disputes tradtionally. He reminded the others of the preponderant role the Eshum of Nyen played in settlement of disputes. The Eshum of Nyen was regarded by Meta as the god of truth and anybody who lied while swearing on the Eshum met sure doom.

The representative of the fon of Nyen said there were some symbols which reminded Meta people of their unity of purpose. He mentioned the Kwiiri, which was like an enlarged conference of all Meta fons and priests. Kwiiri was occasion to discuss critical issues facing the Meta people. The last one held in 1952.

Another important symbol the representative of the fon of Nyen cited is the +toh m+ta' (Meta traditional cup). This cup is used to declare war, sue for peace, call for fertility and abundance. It is the supreme authority of the Metaland around which Meta' people united on their onward march from Tadkon.

Development will come to Meta, according to the fons, when fons themselves engaged in worthy business. The representative of the fon of Nyen said, 'most of the young men and women who have made it in life in Meta are not descended from royalty and do not have lands. If such people came up with development projects, Meta fons should facilitate their acquisition of land.'

On the sidelines of the MEFU meeting, the fons 'baptized' the first edition of MENEMO magazine edited by Dr. Agwo Tata of Boston, USA.

Dr Agwo Tata used the baptism of the MENEMO magazine to outline some of the development projects the Meta Cultural and Development Association - USA (MECUDA-USA) was going to bring to Meta. He however decried the politicizing of MECUDA home branch, mismanagement of funds and conflict of interest as some of the stumbling blocks to a smooth implementation of such projects.

He said it was regrettable that tens of thousands of dollars were collected in the USA for the construction of a mortuary in Mbengwi which never happened because of bureaucracy. According to Dr Agwo Tata, accountability must be used in all projects. Without accountability, partners will be discouraged and at worst, they can even press criminal charges.

Meta fons agreed at the end of the meeting that they had to bury their differences, refrain from translocation, respect traditional protocol and symbols of authority for unity and development to come to Metaland.