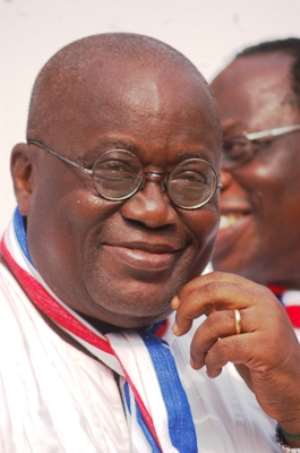 Heroes are worth honouring in every society. Often times, societies like ours wait for their demise before singing their praises, or acknowledging the esteemed virtues and character they portray in their daily lives, which cause change and preserve the values of society. Nana Addo Dankwa Akufo-Addo, in my own estimation and analysis, you are a NATIONAL HERO by all standards! You are not the President you want to be in this country but, posterity and the history of this country will never be oblivious of the legacy you have left in the annals of Ghana's politics.

Some people are of the opinion every politician could have demonstrated your character, at least in the aftermath of two crucial elections, 2008 and 2012, where you lost by the skin of your teeth; but I say it takes a man so strong hearted, passionate about democracy, and with an unwavering love for his country to have exhibited these virtues! Now I know you are not a warmonger, power-conscious, or an arrogant person, as your critics want us to believe. I do not know what meaningful Ghanaians think but for me, you are a true gentleman, pace-setter, peace-seeker, law-abiding, respected, focused and visionary.

Your public proclamation and acceptance of the Supreme Court's ruling, and extending a hand of friendship and congratulations to Mr. John Dramani Mahama as the validly elected Fourth President of the Fourth Republic of Ghana goes to vindicate you as a respecter of the principle of Rule of Law; a virtue many African political leaders lack.

I am particularly happy with the statement on your facebook wall 'Everything in my bones, in my upbringing and in what I have done with my life thus far makes it imperative that I accept a decision made by the highest court of the land, however much I dislike or disagree with it' Indeed you were born to make a difference, and a living example of Gandhi's infamous 'Be the change you want to see in the world' statement.

In my opinion, you were 'fighting' for two things: Justice and Presidency. While you may have relinquished the latter to our President, Mr. John Dramani Mahama, the former, in my opinion, is equally important. Without justice the very foundation of our burgeoning democracy will wobble, and ultimately plunge our country into chaos like many other African countries. As electoral reforms beckon as a result of your historic petition, the country cannot be more grateful! To this end, I say, you have still won!

Nana Addo Dankwa Akufo-Addo, you are my hero and mentor; one that has thought me a quality life ethic of sacrificing and committing to any course of action I take. I may be asking too much but a monument in your name as a recognition won't be repugnant. I hope you continually be the national hero you are and I wish you the best of luck in your future endeavours. God Bless You!!!!!