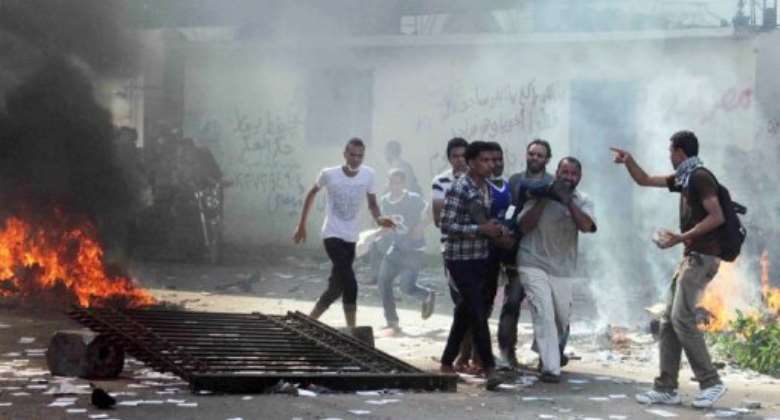 CAIRO (AFP) - At least 12 people were killed across Egypt on Friday, the health ministry said, in clashes between security forces and supporters of ousted president Mohamed Morsi.

The health ministry said four people were killed in violence in the Suez Canal city of Ismailiya and another eight in northern Damietta.

Security sources told AFP that five protesters had been killed in clashes with security forces in Ismailiya.

And they said a police conscript was killed when gunmen attacked a checkpoint in the capital.

Earlier, the army had deployed around Cairo, where streets were deserted ahead of what Morsi supporters dubbed a "Friday of anger".

Soldiers manned roadblocks on major thoroughfares, closing off some of them with armoured personnel carriers.

The demonstrations come after 578 people were killed on Wednesday as police cleared two Morsi protest camps, in the country's bloodiest day in decades.

The interior ministry gave orders on Thursday for police to use live fire if government buildings come under attack.

Residents of some areas formed their own roadblocks, checking identity papers and searching cars.

The international community expressed grave concern, with the president of the UN Security Council pleading for "maximum restraint" after an emergency meeting on Wednesday's violence.

The European Union said Friday that top officials would hold an emergency meeting on the situation in Egypt, where the army-installed government has imposed a state of emergency and night-time curfews.

Sporadic violence continued throughout the country in the form of attacks on security personnel, with 13 killed in the Sinai Peninsula in 24 hours.

"Anti-coup rallies... will depart from all mosques of Cairo and head towards Ramsis Square after (noon) prayer in 'Friday of Anger,'" he wrote.

Laila Moussa, a spokeswoman for the Anti-Coup Alliance of Islamist groups opposing Morsi's ouster, said similar protests were planned across the country.

She said Morsi loyalists, including at least two former members of parliament, had been arrested in dawn raids ahead of the protests.

On Thursday, Tamarod, the protest group that organised opposition to Morsi's rule, also urged Egyptians to take to the streets.

It said they should rally on Friday "to reject domestic terrorism and foreign interference."

The international community expressed concern, with the EU announcing top representatives from all 28 member states would meet on Monday.

On Thursday, the UN Security Council held an emergency meeting on Egypt, calling for an end to the violence and "national reconciliation."

"While we want to sustain our relationship with Egypt, our traditional cooperation cannot continue as usual when civilians are being killed in the streets and rights are being rolled back," he said.

But despite scrapping the Bright Star exercise, which has been scheduled every two years since 1981, he stopped short of suspending Washington's annual $1.3 billion in aid.

The US State Department warned citizens not to travel to Egypt and called on those already there to leave.

Egypt's interim presidency responded defiantly to Obama's remarks, warning that "statements not based on facts may encourage violent armed groups."

Ankara, which backs Morsi, recalled its ambassador to Cairo over the violence, prompting a tit-for-tat move by Egypt.

UN human rights chief Navi Pillay called for an investigation into Wednesday's bloodshed, saying the death toll suggested "an excessive, even extreme, use of force against demonstrators."

On Thursday, Morsi supporters had called for new protests, but only sporadic marches were reported, all outside of Cairo.

Instead, loyalists focused on retrieving and burying their dead, with more than 200 bodies lined up for identification by grieving relatives in one Cairo mosque.

Around the country, activists reported new attacks on churches, allegedly by Morsi loyalists.

The Anti-Coup Alliance of Morsi supporters condemned the attacks but also accused some Christians of supporting his overthrow.

"Although some Coptic leaders supported or even participated in the coup, no such attacks can be justifiable," it said.

Going to the IMF with Ken Ofori-Atta as the lead will yield ...
21 minutes ago