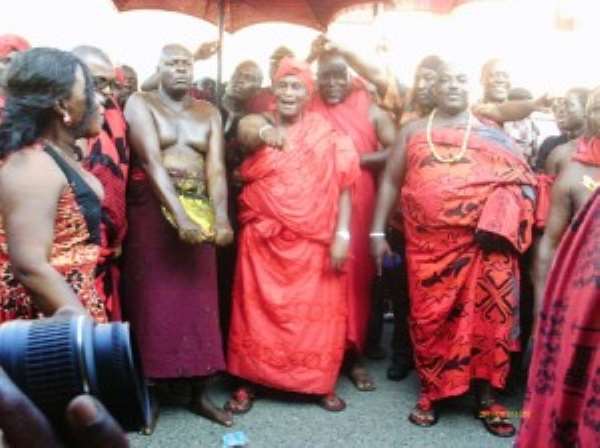 The people Ga-Mashie have set the tone for the celebration of this year's Homowo festival last Saturday, which would later be followed by other groups like Teshie, Osu, La, and other communities of the Ga State.

The agriculture festival (Homowo), which literally means 'hooting at hunger', was welcomed by thousands of Gas from all walks of life, who joined their families to celebrate the annual festival, with other tribes and nationals.

The festival is uniquely marked with the sprinkling of 'Kpo Kpoi' (traditional food prepared with corn dough and palm nut soup) by Nea Wulumo (Highest Priest of the Ga State) at selected family houses and historic sites early in the morning, followed by the Gbese Mantse, Nii Ayi-Bontey II, the Ga Mantse, and the other chiefs.

There was heavy security presence at the durbar grounds to maintain law and order, since there exists a dispute over the Ga Mantse stool.

The Homowo celebration is also colourfully marked with traditional rulers and leaders clad in red cloth, beating of drums, blowing of the atentenben (traditional horns), and firing of musketry.

A month before the celebration a ban is put on noise-making, which is to remind farmers to plow and plant for the rains have set in, and climaxed with a ritual performance for twins on the eve of the Homowo.

The Highest Priest, in a brief interview with The Chronicle, described this year's festival as the best so far, after decades of chieftaincy issues in the Ga State.

Nuumo Akwaa Mensah III, while seated with his elders receiving greetings and well wishes from all and sundry, recounted the genesis and exodus of the Gas, which goes way back to the fall of Babel, where mankind was divided by language barrier, hence their migration to the present Accra.

He said their arrival at the shores of Accra was met with great famine that many of people died of hunger.

'The priest leading the people by then in the midst of the famine found a cob of corn and planted it, and after three weeks, it was fully grown and harvested. So the High Priest gave it to the people to cook and eat. That is why every year we celebrate Homowo to commemorate our forefathers struggle to overcome severe hunger,' he explained.

He added that 'Kpoikpoi' is sprinkled for the gods, forefathers, and animals to partake in the glory of overcoming hunger.

Nae Wulomo prayed for peace, unity, and prosperity for the country, and urged the youth to hard work to attain a high level of life, and accept the Supreme Court verdict on the 2012 election petition.

Nuumo Akwaa Mensah III emphasised that next year's celebrations would be bigger and better, since it will be a total improvement over this year's. 'We will make sure disputed stools are occupied by the right persons for peace to prevail.'

The Paramount Chief, King Tackie Adama-Latse, also called for unity, peace and love among the country men and women, traditional leaders and politicians to build a prosperous Ghana.

According to him, when there is trouble in Accra, the rest of Ghana would not be in peace, and therefore, pledged to work tirelessly to unite traditional leaders of the Ga state.

As he waits his final crowning as the overlord of the Ga state, Nii Adama Latse would be working from the public view for the Ga Mantse Palace to put things in order to restore the Gas lost glory.

Gbese Mantse II, Nii Ayi Bontey, added his voice to the peace call, by charging all and sundry to respect the final decision of the court.

He also expressed appreciation for the unity among chiefs which has culminated in the establishment of a new Ga Traditional Council, following the granting of paramount status.