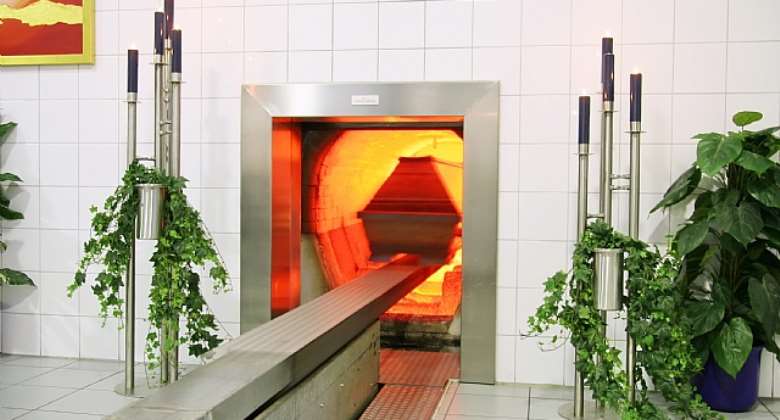 I write to Erverhs (who are now called Hebrews) and to those who ascribe to Erverh GOD (YHWH) through our LORD Yeshua (Jesus) the Messiah and on the issue of burning of the dead (cremation) which is alien to YHWH's commandments and decrees. For those who do not believe in YHWH, HE shall deal with them according to HIS own mercy and grace before the day of judgement.

I write not from a position of judgment or authority, I write from the position of YHWH decrees. Those who are of HIM and are born of HIM must obey HIS commandments and decrees.

In the discussions below, I will prove that GOD/YHWH has prescribed how copses should be disposed of whether you live in mountainous or sandy places as a Hebrew or Christian. I will also prove that, throughout scripture, a burned copse (flesh or bone) is cursed or it is a form of punishment from GOD. That is why death through fire or accidents that burns or breaks the bones are considered as abnormal death and are deprived of laid down burial rights in Hebrew communities. A true Hebrew or Christian cannot authoritatively say that burning of copse (cremation) is one of the 'ways' the dead can be disposed of.

INTER ( QABAR)
According to Merriam-Webster online dictionary, to bury means; 1 : to dispose of by depositing in or as if in the earth; especially : to inter with funeral ceremonies

2 a : to conceal by or as if by covering with earth

b : to cover from view.
Now in Genesis 15:15, YHWH gave a clear instructions to Abraham on how his body should be treated when he dies. The body shall be 'qabar', a Hebrew word meaning to inter

"15 And thou shalt go to thy fathers in peace; thou shalt be buried in a good old age." I limit myself to Abraham because, his calling from the Chaldees is the birth of the Hebrew nation. Genesis 15:7. And this has been the order of YHWH up to this day.

JESUS was buried in a tomb - carved hole in a rock as a fulfillment to YHWH commandments.

Matthew 27:59-60
59 And when Joseph had taken the body, he wrapped it in a clean linen cloth, 60 And laid it in his own new tomb, which he had hewn out in the rock: and he rolled a great stone to the door of the sepulchre (grave, tomb, or place of interment) and departed.

Genesis:50:24-25
24 And Joseph said unto his brethren, (when) I die: and God will surely visit you, and bring you out of this land unto the land which he sware to Abraham, to Isaac, and to Jacob. 25 And Joseph took an oath of the children of Israel, saying, God will surely visit you, and ye shall carry up my bones from hence. That's why up to today, the Hebrews (Erverhs) carry their dead back home for burial.

Exodus 13:19
19 And Moses took the bones of Joseph with him: for he had straitly sworn the children of Israel, saying, God will surely visit you; and ye shall carry up my bones away hence with you. That means, from 1805BC to 1406BC the bones of Joseph were preserved so as to be buried in the land of promise.

Joshua 24:32
32 And the bones of Joseph, which the children of Israel brought up out of Egypt, buried they in Shechem, in a parcel of ground which Jacob bought of the sons of Hamor the father of Shechem for an hundred pieces of silver: and it became the inheritance of the children of Joseph.

THE CONDITIONS UNDER WHICH BONES OR CORPES ARE BURNED IN SCRIPTURE

Anytime there is breaking of bones or burning of flesh and bones of a person in the Bible or in the land of the Hebrews (Erverhs) it is because there was a curse or punishment. Even that, in some cases of Kings' his bones were preserved and buried properly. 1 Samuel 31:12-13 & 2 Samuel 21:12-14

When you read 2 Kings 23 the curse of burning of bones of wicked people (disobedient children) and the preservation of the bone of the righteous/Prophets i.e. vs 18) was clearly demonstrated. Read 2 Chronicles 34. Ezekiel 24:1-10, Amos 2:1

Again the scattering and breaking of bones are YHWH's curses and punishments. Jeremiah 8, Jeremiah 50:17 (symbolic destruction of Israel), Ezekiel 6:1-6

2 Kings 13:20-21
20 And Elisha died, and they buried him. And the bands of the Moabites invaded the land at the coming in of the year.

21 And it came to pass, as they were burying a man, that, behold, they spied a band of men ; and they cast the man into the sepulchre of Elisha: and when the man was let down, and touched the bones of Elisha, he revived, and stood up on his feet.

The Prophesy concerning Jesus' bones
John 19:34-36
34 But one of the soldiers with a spear pierced his side, and forthwith came there out blood and water. 35 And he that saw it bare record, and his record is true: and he knoweth that he saith true, that ye might believe. 36 For these things were done, that the scripture should be fulfilled, A bone of him shall not be broken. The wholeness of the consecrated people, whether dead are alive is of great spiritual significance to YHWH's usage and symbolism of spiritual holiness and acceptance of use. That is why even in sacrifice, animals to be sacrificed are to be without blemish.

THE USE OF COFFIN/CASKET
The only recorded Egyptian culture 'burial' of a Hebrew is in Genesis 50. The reason being that, the bones of Joseph were to be carried back to the land of promise and buried with his ancestors when YHWH visits the people of Israel to rescue them from bondage. Genesis 50:26

26 So Joseph died, being an hundred and ten years old: and they embalmed him, and he was put in a coffin in Egypt.

The coffin typical of Egyptians was for preservation of their Kings and not for burial. History has proved this point. We are not to use coffin/casket for burial. The copse is to be wrapped in a clean and white linen and buried. So the issue of cremation being more economic does not arise. Whatever cemented/ brick cemetery costs you incur are self imposed. They are not YHWH's instructions.

ASHES TO ASHES, DUST TO DUST, AND EARTH TO EARTH
It is not YHWH's words or instructions. Neither are these words in the Bible. The origin of these came from English/Anglican burial service.

The text of that service is adapted from Genesis 3:19 (King James Version):

"In the sweat of thy face shalt thou eat bread, till thou return unto the ground; for out of it wast thou taken: for dust thou art, and unto dust shalt thou return." There is no ashes.

The 1662 version of the Book of Common Prayer of the Anglican, indicated the manner and text of the burial service:

Then, while the earth shall be cast upon the Body by some standing by, the Priest shall say,

"Forasmuch as it hath pleased Almighty God of his great mercy to take unto himself the soul of our dear brother here departed, we therefore commit his body to the ground; earth to earth, ashes to ashes, dust to dust; in sure and certain hope of the Resurrection to eternal life, through our Lord Jesus Christ; who shall change our vile body, that it may be like unto his glorious body, according to the mighty working, whereby he is able to subdue all things to himself."

THE LINK BETWEEN CREMATION AND REINCARNATION/REBIRTH

Reincarnation is common with the Hare Krishna, Hindu, Buddhism, Eckankar etc.. Whilst Hare Krisna believes that a person is reincarnated ( same person or person's spirit coming back to earth) in the next world according to the person's spiritual disposition in the present I.e. if you are spiritually disposed to gluttony you may reincarnate as a pig in the next rebirth. The others believe in progressive rebirth/ reincarnation until you are united with GOD and becoming God yourself. We can see a clear confusion in the reincarnation theory.

However, according to these faith, the principle of cremation is to facilitate reincarnation faster as this will help dissolve the body quickly so as to allow the next user of the body to reincarnate.

Let us assume, this is only an assumption, if GOD wants to send a spirit back to earth, is it the coarse material (body) that is most important or the spirit of man. It is like when a manufacturer produces an item say mackerel, it can only reproduce the next mackerel again after the consumer is done with the content and the container recycled.

"22 And God blessed them, saying, Be fruitful, and multiply, and fill the waters in the seas, and let fowl multiply in the earth." We and other creations of YHWH has the capacity to reproduce/procreate after their kind in multiples. YHWH does not need to wait for a body to be fully dissolved so as to use its cells to recycle for next reincarnation. YHWH is the CREATOR of everything. HE is not in a recycling business.