Mugabe, at 89 still hungry for power 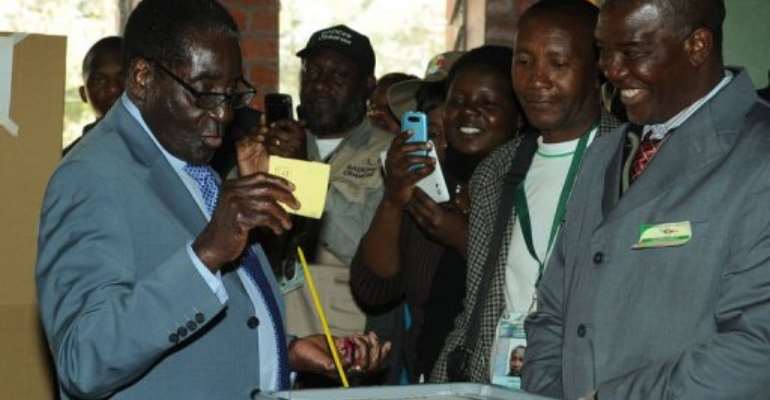 Zimbabwe President Robert Mugabe (L) casts his vote at a polling booth in a school in Harare on July 31, 2013. By Alexander Joe (AFP)

HARARE (AFP) - Zimbabwe's veteran leader Robert Mugabe once quipped that he would rule his country until he turned 100.

It may have been just another witty remark from the notoriously sharp-tongued leader, but at 89, Mugabe shows few signs of flagging as he bids for a seventh turn in office.

In three turbulent decades at the helm of the former British colony, the firebrand leader has gone from a darling of the West to international pariah, and many are keen to see a new era in Zimbabwe.

Mugabe swept to power as a hero in the fight against white minority rule, bringing democracy to millions of black Zimbabweans, and was widely credited with health and education reforms.

But his lustre quickly faded.

From crushing political dissent to ushering in disastrous land reforms that saw the economy crumble, many accuse Mugabe of turning the regional breadbasket of Zimbabwe into a basket case.

A new constitution approved in March could see Mugabe serve another two terms -- until he is 99 years old -- but he could not hide his age on the campaign trail.

His trademark walkabout was dropped in favour of a wave to supporters from the back of a van and as he harangued his enemies from the podium, his elbows leaned heavily on it for support.

Mugabe's health has been a topic of much speculation in recent years.

He makes frequent medical trips to Singapore -- purportedly to treat cataracts -- and a 2008 US diplomatic cable published by Wikileaks mentioned he had prostate cancer.

But Mugabe retains an iron self-confidence, telling the New York Times in a rare interview ahead of Wednesday's election: "The 89 years don't mean anything."

"They haven't changed me, have they? They haven't withered me. They haven't made me senile yet, no. I still have ideas, ideas that need to be accepted by my people."

His tenacity is a constant source of chagrin for long-time political rival Morgan Tsvangirai who is making his third bid to unseat Mugabe, after being forced into an uneasy unity government following violent 2008 polls.

The choice for voters on Wednesday was "generational, not just political," Tsvangirai said.

Born on February 21, 1924, at Kutama Mission northwest of the capital Harare, Robert Gabriel Mugabe was born into a Catholic family and was described as a loner, and a studious child.

After his father walked out on Mugabe's mother and siblings when he was 10, the young man concentrated ever harder on his studies, and qualified as a schoolteacher at the age of 17.

As a member of various nationalist parties that were banned by the white-minority government, Mugabe was detained with other nationalist leaders in 1964 and spent the next 10 years in prison camps or jail.

He used his incarceration to gain three degrees through correspondence courses, but the years in prison left their mark.

His four-year-old son by his first wife Sarah Francesca Hayfron died while he was behind bars, but Rhodesian leader Ian Smith would not allow him leave to attend the funeral.

Mugabe emerged in November 1974 as the leader of the ZANU political party, and left for Mozambique, from where his banned group conducted a guerrilla war on Smith's white-minority ruled Rhodesia.

Economic sanctions and war forced Smith to negotiate, after which ZANU, which drew most of its support from the ethnic Shona majority, swept to power in the 1980 election.

But the other side of Mugabe was coming to the fore. He crushed dissent among the minority Ndebele people with his North Korean-trained Fifth Brigade in a campaign that killed an estimated 20,000 suspected "dissidents" between 1982 and 1986.

In 2000 he launched controversial land reforms, driving out white farmers and seizing their land in often violent rampages by his supporters.

Productive commercial farms were redistributed to his cronies, devastating Zimbabwe's economy and leaving most rural dwellers reliant on food handouts.

By the turn of the millennium, a new challenger to Mugabe's hold on power had emerged, Morgan Tsvangirai, a miner and the leader of the country's largest union.

His MDC gained a strong following among urbanites and Zimbabweans in the rural west of the country, and he won a first round of voting in 2008 before pulling out of the second round citing violence against his supporters.

But Mugabe retains the support of a significant proportion of Zimbabweans, who cherish his image as a freedom fighter.

He has also taken aim at homosexuals, calling them "worse than pigs and dogs" and even fellow freedom fighter Nelson Mandela has not escaped his invective, being branded "too saintly, too good" to South Africa's white population.

Mugabe has vowed to step down if he loses the election, but the hardline policies that have characterised his rule will continue to appeal to his droves of fans, even as the voices of those calling for true democracy in Zimbabwe grow ever louder.