Nandom District Assembly after one year 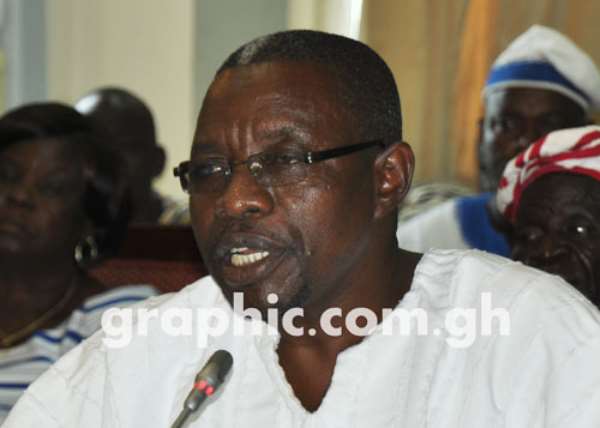 To many people, a year in the life of an institution could be said to be insignificant. However, to the Nandom District Assembly in the Upper West Region, which was established a year ago, the period marks an important milestone in the lives of the chiefs and people in the district.

The district is one of the new ones created by President John Atta Mills, which brings the number of districts to 11 to make up the Upper West Region and is bounded on the east and south by the Lambussie - Karni and Jirapa districts and the north and west by the Republic of Burkina Faso respectively.

With a total area of about 1,051.2 square kilometres, which constitutes 5.7 per cent of the region's total land area, the Nandom district is said to have an estimated 157 communities with 95 per cent of the inhabitants in the rural areas.

The population density is about 89 per square kilometres, making it the most densely populated district in the region. Created by Legislative Instrument 2102, the assembly was inaugurated on June 28, 2012, after which Mr Curtbert Baba Kuupiel, a development planner, was nominated and approved by all the 36 members of the assembly, thus making him the first district chief executive of the Nandom District Assembly.

Until its creation, Nandom was part of the Lawra District Assembly, with the administrative capital being Lawra.

Since its creation, the assembly has received almost GH¢ 400,000 from the central government which has been expended on a street light project which was a top priority for the people of Nandom.

Again, the assembly wrote a proposal to the District Assembly Common Fund (DACF) Secretariat, which released a total amount of GH¢120,000 for the construction of 11 boreholes for various communities.

Also, kindergarten teachers who were not on government payroll were paid their salaries as a way of motivating them to give their best

Now temporarily housed in rented premises which are not spacious enough to accommodate decentralised staff, the assembly has quickly acquired a large tract of land to put up its own permanent offices and houses for the DCE and other staff at Danko, Tome and Damange respectively.

'Our aim is to ensure that we create the necessary environment for our staff to put in their maximum best , which will impact on the lives and living conditions of the people; Mr Curtbert Kuupiel, told the Daily Graphic in his office at Nandom.

The district is endowed with one of the best health facilities in the Upper West Region, the Saint Theresa Catholic Hospital and a number of polyclinics which offer services to both Ghanaians and people from neighbouring Burkina Faso in addition to a number of second cycle institutions, especially the Nandom Senior High School.

The physical location of the district makes it unique for tourism, with the most significant potential being the Kakube Festival. The rich heritage of the people (Kakube) can attract foreigners and investors during such periods to boost business in the district if it is properly developed.

The district also boasts an arts and crafts, xylophone , pottery and basketry industries.'The proposed restoration of the slave centre located at Gengenkpe and Zimuopare will go ahead and the assembly, in collaboration with the Catholic Church, intends to rehabilitate the 'Stone Church' to boost tourism.

The assembly is to establish a one- stop shop and lorry park at Nandom to serve big haulage vehicles from both Ghana and Burkina Faso. The facility is expected to have offices for the Ghana Immigration Service (GIS) and the police, restaurants and hostels, among others. It is expected to promote economic activities, thus generating jobs for the people and also increasing the internally generated funds (IGF) of the assembly.