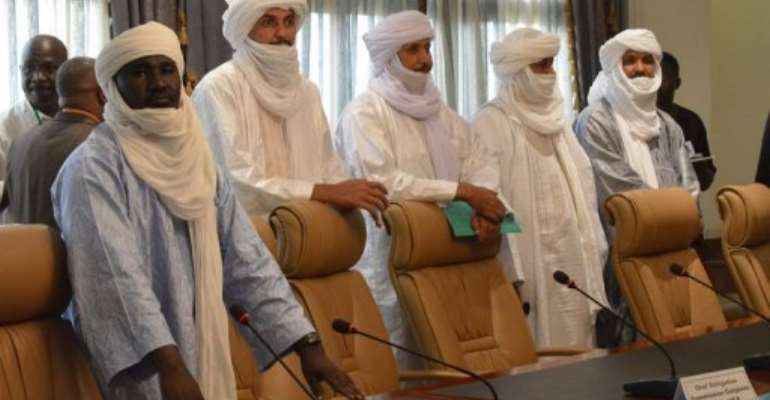 OUAGADOUGOU (AFP) - Bamako is set to sign a deal with Tuareg rebels on Tuesday to enable nationwide polls to take place next month and put the troubled country back on the path to recovery.

After 10 days of often tense negotiations in Burkina Faso, an agreement has been reached that will allow the Malian army to enter the key northern town of Kidal -- currently occupied by Tuareg rebels -- to secure the planned July 28 presidential ballot.

"The accord is ready to be signed," said Tiebile Drame, head of the Malian delegation to peace talks in Ouagadougou.

The interim deal is due to be signed in Ouagadougou on Tuesday by two main Tuareg rebel groups at a ceremony attended by Burkina Faso President Blaise Compaore, who has been lead mediator.

Drame told AFP that a consensus has been reached on the importance of territorial integrity and the secular nature of the state, and "as a consequence, on the deployment of the army and the administration of Mali in all regions, including in Kidal, upon signature of this agreement".

The lack of a deal has been a major obstacle in the planning of the election, seen as crucial to Mali's recovery from a conflict that saw Al-Qaeda-linked groups seize the northern half of the country for nine months on the back of a March 2012 coup.

The crisis was sparked by a rebellion by Tuareg separatists from the National Movement for the Liberation of Azawad (MNLA) who want autonomy for their northern homeland.

This led angry soldiers to overthrow government in Bamako.

The Tuareg continued their campaign, seizing key northern cities, but they were sidelined by their powerful Al Qaeda-linked allies who chased them out and seized control of the north where they imposed an extreme form of Islamic law.

French troops have in five months reclaimed most lost territory but analysts have warned that Malian soldiers and a UN mission of African forces would struggle to contain Islamist fighters without support from Paris.

The United Nations last week warned that the rights situation in northern Mali remains precarious, with both rebels and Malian troops having been accused of committing numerous human rights abuses.

A UN force for Mali to be made up of 12,600 international troops and police is due to start deploying on July 1.

The MNLA sided with France during the worst of the fighting this year but it has been reluctant to allow government troops into its Kidal bastion for the election.

Arrest warrants issued by Malian authorities against MNLA chiefs have been a sticking point in the negotiations, but one source said a verbal agreement has been struck to lift them.

Drame would not confirm that information, but said an international commission of inquiry is expected to be set up to deal with crimes against humanity committed during the conflict.