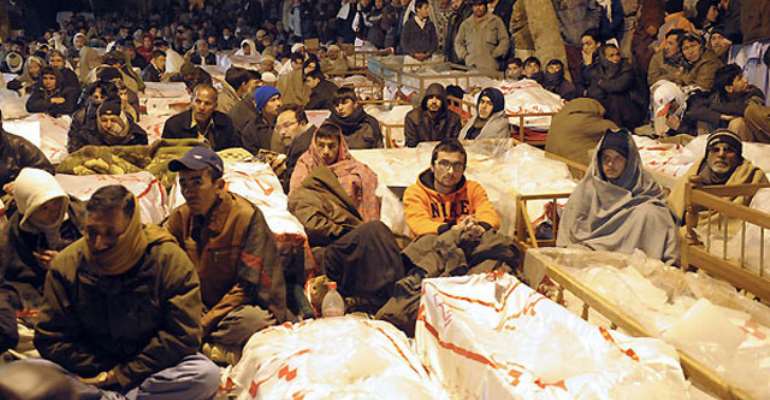 Pakistan's founder 'Qaid-e-Azam' Mohammad Ali Jinnah dreamt of a country which would be Islamic, at the same time secular. The basic ideals behind the creation of Pakistan underscored security, welfare and cooperation of the people of all religions. Thanks to extremism and radicalisation, today Pakistan is counted among the most dangerous places to live. Unfortunately, Pakistan's police, army and government look helpless in providing enough protection to the minorities which are being targeted on daily basis. This failure of Pak establishment to act against Jihadi outfits which target the minorities with full impunity, creates doubt about its willingness to nip them in the bud. While the links between these outfits and the security establishment have been widely discussed, the jihadi organizations wield electoral clout forcing many political parties to adopt a soft policy towards them. According to an estimate, the PML(N) has a tacit understanding with the jihadi organizations in 40 constituencies of Punjab.

Pakistan's minorities which are being targeted include Shias, Ahmedias, Hindus, Sikhs and Christians. Pakistani Hindus visiting India often refuse to go back to their home country. There have been reports of forcible religious conversion of many Hindus in Pakistan. Similarly, forcible collection of Jaziya tax from Sikh traders has also been reported. Many churches have been vandalized in the recent past in Pakistan. Recently, a Christian girl was deliberately implicated by a maulvi under the notorious Blasphemy law. Later, it came to notice that the maulvi himself asked that girl to throw burnt pieces of Qura'n Sharif in garbage bin and then accused her of setting Qura'n sharif on fire. One Muslim youth exposed that maulvi and saved that girl from the nonsensical Blasphemy law.

Shia and Ahmediya sects are also being targeted on large scale in Pakistan. Even though both these sects call themselves Muslim and believe in Allah, Quran' Sharif and Prophet Mohammad; however, Wahabi Muslims refuse to recognize them as Muslims. Terrorist organizations linked to Wahabi ideology such as Sipah-e-Sahaba and Lashkar-e-Jhangvi etc. are openly massacring the people of Shia and Ahmediya community. Their places of worships are being destroyed. Even those belonging to the majority Barelvi (Sufi) sect are not feeling safe in Pakistan. Many of their ancient mausoleums have been destroyed by Wahabi terrorists.

The extent of violence faced by Hazara Shias in Quetta city of Pakistan suggests that it has almost become unbearable for the minorities to live in Pakistan. Lashkar-e-Jhangvi and Sipah-e-Sahaba have targeted thousands of people belonging to minorities, including women and children, in Balochistan and Swat valley. These terror groups also claim the responsibility for the above attacks. For instance, on 10thJanuary, 120 people got killed in a bomb blast in a Billiard hall in Quetta, capital of Balochistan. On February 16, 92 innocents lost their lives in a deadly attack in main market of Quetta city. The responsibility for these attacks was claimed by Lashkar-e-Jhangvi. On February 18, terrorists linked with these groups shot dead famous social activist and eye specialist Dr. Ali Haider and his 11-year old son in Lahore. In Quetta alone, about 1200 Shias have been killed within last two months. Here Shia community constitutes about 20% of the population. Although both Shia and Sunni communities have been living in peace since centuries in this region; terrorists affiliated with Wahabi ideology don't want any minority to live in peace.Lately, the city of Quetta came into global limelight when the kin of 120 innocent Hazara Shia victims of terrorist violence sat on the road and refused to bury their bodies. This agitation went on for five days and they agreed to bury the bodies only after the Prime Minister Raja Parvez Ashraf met them personally and assured them of justice and security. Same as on 3 march At least 50 people, including women and children, were killed and about 150 injured when two blasts ripped through a Shia-dominated area of the southern Pakistani port city of Karachi.

In fact, Sipah-e-Sahaba and Lashkar-e-Jhangvi belong to the same category as that of the Taliban, Tehreek-e-Taliban, Jamaat-ud-Dawa and Al Qaeda. Calling themselves true Muslims, the members of these terror groups indulge in violence and cruelty in the same way as Yazid unsuccessfully tried in Karbala to make Imam Husain comply with his demands. But history has neither been kind to Yazid nor his followers. The need of the hour is to keep a check on these extremist forces and find and block their sources of finance. Not only the Muslims, but the people belonging to all the religions should come together and raise their voice against fundamentalist and extremist ideology. By.. Tanveer Jafri

(About the Author)
Author Tanveer Jafri is a columnist based in India.He is related with hundreds of most popular daily news papers/portals in India and abroad. Jafri, Almost writes in the field of communal harmony, world peace, anti communalism, anti terrorism, national integration, national & international politics etc.He is a devoted social activist for world peace, unity, integrity & global brotherhood. Thousands articles of the author have been published in different newspapers, websites & newsportals throughout the world.