Archbishop of Bamenda Expels 300 Mbororo From their Homes 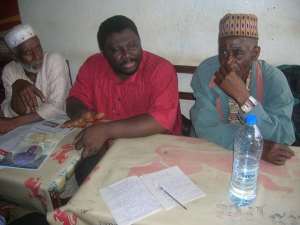 His Grace Cornelius Fontem Esua, Archbishop of the Bamenda Catholic archdiocese has issued a quit notice signed on 20 January 2013 for the 300 Fulani (Mbororo) of Wumse-Ndzah quarters in the Bamenda III Subdivision, of Mezam Division, North West Region of Cameroon. They were told to quit their houses and farms in 10 days without alternative lodgings arranged. This was to make way for work to begin on the Catholic University of Cameroon CATUC.

The Mbororo are not squatters and settled on this land around 1904 coming from Ngaoundere. In 1933 a certificate of occupancy of this land was issued by the Resident British Officer to the Bamenda Division, recognizing the Fulani as owners. By Cameroon's Land Tenure Law they could proceed to transform the occupancy certificate into a land certificate.

Today, the Fulani have built permanent homes and are farming and grazing around their homes. According to Mr. Cosmas Jobain, in charge of lands and micro projects at the Archbishop's office in Bamenda, the Catholic University of Cameroon, represented by His Grace Cornelius Fontem Esua initially applied for 73 hectares, and is being awarded 63 hectares. This leaves the Mbororo homeless and nothing to eat.

The Divisional Officer of Bamenda III Sub Division, Walters Tarkang Ayuk in complicity with elements at the Mezam Divisional Delegation of Lands and surveys, with vested interests have misled the Minister of State Property and Land Tenure, Jean Baptiste Baleoken to attribute a temporal concession of 46 hectares on 2 September 2011, at Wumse Ndzah to the Catholic University of Cameroon, represented by Archbishop Cornelius Fontem Esua.

According to the Archdiocese of Bamenda, construction of the CATUC is a huge development project that will cost a whooping FCFA 55 billions, (US$110,000,000). Cosmas Jobain states that they paid out compensations of FCFA 18,717,736 for buildings, and FCFA 4,866,500 for crops. Meaning a total compensation of FCFA 23,584,236 was paid and no further compensation will be paid, according to the Archbishop.

Ardo Adamu Bi Mamada, the chief of the Mbororo claims he was never consulted or entered into any negotiations with the Catholic Archdiocese of Bamenda. He further claims that he received no compensation from the Archbishop and none of the Mamadas, rightful heirs of the Mamada Estates collected money from the Catholics.

Meeting behind closed doors in the office of the Senior Divisional Officer (SDO) of Mezam, Nguele Nguele Felix on Friday 1 March 2013, Mr. Enow Junior, Divisional Delegate of Lands for Mezam Division supported the claims of Ardo Adamu Bi Mamada that Mamada did not take part in meetings concerning the land concession to the Catholics.

Earlier on 1 March 2013, the Mbororo community represented by nine members presented a petition to Mr. Adolphe Lele l'Afrique, Governor of the North West Region. The petition in parts read, 'As a peace loving and law-abiding Muslim community, we wish to bring to your attention that this matter is being considered as a war waged by the Christians on Muslims.

To avoid any bloodshed as is the case in neighbouring countries with the Al-Qaida and Boko Haram,…' the Catholics should among other things withdraw peacefully from Mamada Estates to avoid bloodshed.

Mr. Enow Junior told the SDO that he advised Ardo Mamada to collect money and leave the land as it is National Land with no land certificate in the name of the Mamada Estates. The Divisional Delegate of Lands said Ardo Adamu could not stop government from carrying out a development project.

Abdul Karimu Shehu, representative of Mbororo Social and Cultural Development Association MBOSCUDA, took the floor and barely holding his tears, asked whether they were expelling the Mbororo because they are an ethnic minority. “Mbororo or Fulani people have equal rights and responsibilities like all other Cameroonians.

I am disappointed that a government authority presented their land for acquisition by a private institution. The catholic mission is a private religious institution. As Muslims, we have our prayer grounds here and cannot allow the Catholics to desecrate our land.”

Enow Junior said they had surveyed and provided a new site for resettlement in Bambili. “We will drive away the Bambili people who are farming on the proposed resettlement land for the Mbororo.” Enow said.

“Please, in the name of Allah, there are enough ethnic crises in Cameroon. Do not worsen the situation by displacing 300 Muslims who have been living peacefully on their land to resettle them on a land in dispute. You are sacrificing the Mbororo community because of money you have received. Stop this injustice in the name of Allah or you will bear the consequences.” Abdul Karimu Shehu warned.

The Mbororos who are treated like wanderers in Cameroon and are marginalized, are considered as a nomadic minority with no rights. Surrounding tribes always believe Mbororo still have to move to some other land. The Ndzah people who arrived the area, as hunters, at the same time as the Fulanis believe they have more rights to the land than the once nomadic Mbororo. The Ndzah treat the Mbororo as a no-people.

Cosmas Jobain enters this depersonalization of the Mbororo by telling Abdul Karimu that “whether you call those your people in Ndzah, Mbororo, Fulani or Ganako, I do not know. “

The said assessment of the properties of the Fulanis is flawed and the compensation the Catholics claim they have paid is inadequate. The Catholics should not have gone to the land in the first place. They were misled by the rival Ndzah people, but are tenaciously pursuing the land concession because they believe, as an ill-informed minority, the Fulanis cannot and will never stand up for themselves.

The area the Fulanis are asked to relocate to is cultivated by the Bambili people of the Tubah Sub Division of Mezam Division, North West Region. They have threatened to fight the Mbororo if ever they attempted to step on the land.

The North West Region is a very volatile part of Cameroon with many farmer-grazer problems. The actions of the local administration and the Catholic Archdiocese of Bamenda are tantamount to an infringement on the rights of the Mbororo and a provocation of war, in the words of the Mbororo themselves.

The Governor of the North West and the SDO of Mezam were not aware of the looming crises. Many stakeholders are not informed of the steps being taken by the Catholics and the corrupt local administration to illegally dispossess this indigenous people of their homes, farm and grazing lands.

Reverend Michael Bibi, Chancellor of the Bishop's house in Bamenda said he was not aware of the arrangements and could not comment. He said in the absence of His grace Cornelius Fontem Esua Mr. Cosmas Jobain could explain the land deals which he did to the best of his knowledge.

Mr. Cosmas Jobain refused to discuss the details of the Quit Notice from the Archbishop. He confirmed it was signed by the Archbishop and I should wait for his return from Europe to get the man of God's comments. Jobain said the amount paid as compensation to the people by the Archbishop was proposed by the administration.

If the said compensation of FCFA 23,584,236 is shared among the 300 souls in Wumse-Ndzah, each community member will have only FCFA 78,615 for the rest of their life. What will happen to future generations, their farms and grazing lands? Nowhere in Cameroon would the Mbororos ever be able to replace the homes they are going to lose with the derisory amounts they were paid.

The Ardo (chief of the Fulani) Adamu Mamada, whose father founded the Mamada Estate in dispute, has refused to be associated with the activities of the administration. He has been arrested twice and tortured by police on the orders of the Divisional Officer of Bamenda III. He has a certificate of three weeks incapacity.

He was arrested when he hired a tractor from the former Prime Minister, Hon Simon Achidi Achu, to plow his Irish potatoes farm as he did every year. Ardo Adamu says that a bailiff accompanied by the police, on orders from the Archbishop came and seized the tractor and took it to Bamenda III Sub Division. When he arrived there he was ordered into the police office where he was tortured mercilessly. On asking who gave the orders he was told they were orders from D.O. Walters Tarkang Ayuk of Bamenda III.

A certain Dr. Alfred Ndi, close friend of the Mamada Estates is alleged to have benefitted from the chaos which he himself describes as the “…conflict between the Fulanis, leading to outsiders coming to claim lands for themselves.” Dr. Ndi Alfred has caused the family of the Ardo (mostly illiterate) to convey 45 hectares of their ranch to him.

He has speedily erected a small hut on it in what he calls “a buffer against the Catholics.” Some members of the administration are alleged to be awarding themselves plots on remaining parts of the disputed land.

Ardo Adamu says “I have just realized that Dr Ndi Alfred whom I trusted was an Arab's Carmel. He asked to bask in the warmth of our household and is now trying to throw us out, by taking advantage of our illiteracy and ignorance .”

Abdul Karimu fears that if the Government of the Republic of Cameroon chose to sacrifice the Mbororos, it would be creating a bigger problem. “The dispossessed Mbororo, in the absence of resources and any means of survival will be recruited into terrorist groups. The young girls will be sold into sex slavery, child prostitution, or to child trafficking rings and the young men will become armed robbers.”

Bamenda depends on the water catchments on the hills for potable water in town. Abdul Karimu says “where the survey people want to resettle the Mbororo is a watershed and when cattle graze in the forest the catchment will be seriously threatened by deforestation, leading to erosion and scarcity of potable water. Secondly there are many rocks in the area which will destroy the hooves of cows leading to foot disease.”

Ms Mairo Mamada, representing theMbororo women said, “As the Ardo was opposed to the Catholics we advised that nobody should take money from them. I do not know how much was given. Since my father never took money, I will never take it. Mamada hill is all I know. I have never been anywhere else. I know only Ndzah. If they are giving money, I am supposed to know. I will live and die here”

The Governor had told the SDO, “These people are here because the Archbishop gave them a quit notice. I am sending them to you to determine whether the attribution was properly done.”

On his part, the SDO, after reading the Quit Notice from the Archbishop and the petition of the Mbororo and listening to the Land and Survey delegate for Mezam and other stakeholders, said he was going to determine whether there were irregularities with the attribution of the temporal land concession to the archbishop and then call all stakeholders to a meeting.