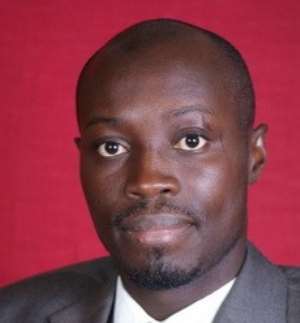 The Member of Parliament (MP) for Ajumako-Enyan-Essiam, Mr Cassiel Ato Forson, has denied that he has been defrauded to the tune of GH¢180,000 by a parliamentary candidate of the People's National Convention (PNC) in the 2012 general election.

He said even though he is one of the directors of Omega Energy Limited, the company that was defrauded, at no point was he involved in the transaction.

The Tuesday, February 26, 2013 issue of the Daily Graphic reported that a PNC parliamentary candidate in the previous elections, Hammeh Senare, had allegedly defrauded the MP of GH¢180,000 under the pretext of selling an abandoned filling station at Dome to him.

Expressing outrage over the story, Mr Forson said he could not have been swindled when he had not directly been involved in the purchase process.

He said the Managing Director of Omega Energy Limited, Mr Kojo Ampem-Darko, who facilitated the transaction should rather have been mentioned in the story and not him (the MP).

He said he was only informed about the transaction when it became clear that the company had been swindled.

The MP also denied reports that he had received a call from one Kojo Opoku, one of the fraudsters, during the execution of the fraud.

Three accomplices — Kojo Opoku, 40, a carpenter; Kofi Sarkodie, also known as Yusif Seidu, 37, a caretaker, and Ernest Kofi, 50, a trader — who acted as assistants to Senare have appeared in court for alleged fraud.

According to the story, as narrated by the Madina District Police Commander, Superintendent Joseph Owusu-Bempah, the deputy manager of the Tudu branch of the SG/SSB had also been invited by the police to explain how GH¢180,00 paid on Saturday, February 16, 2013 was cleared the same day by the main suspect.

He said the whole incident started sometime in January this year and that Mr Forson expressed interest in the filling station.

During the course of the negotiations, suspect Senare told the MP that she was the firstborn of Alhaji Sadik Sinari, Ghana' Ambassador to Egypt in the First Republic.

Senare was said to have withdrawn all the GH¢180,000 from her account that same day.

The following day, which was a Sunday, when the MP went to take ownership of the property, he learnt that the woman to whom he had paid the money was not the real owner of the property.

He was then taken to the residence of the real owner. Madam Omaboe, who explained that although she was offering the place for sale, nobody had shown any interest.

At that stage, the MP realised that he had been swindled and so he called Senare and asked her to come for the rest of the money.

Before that, he had alerted the police, and so as soon as Senare arrived, the police arrested her.

However, upon interrogation, she claimed that after cashing the money from the bank, she handed it over to Ernest Kofi.

The police traced Ernest Kofi to his house at Adenta and arrested him.