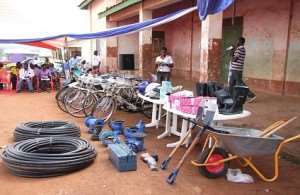 A $477,000 expanded water project has been handed over to the people of Kenyasi by Newmont Ghana Gold Limited (NGGL), through the Asutifi District Assembly, as part of its collective quest to improve the living conditions of people in its catchment area.

At the handing over ceremony held at Kenyasi No.2, Mr. Paul Sowley, General Manager, Environment and Social Responsibility, Newmont Ahafo Mine, gave the assurance of the company's continuous partnership with the District Assembly for development.

According to Mr. Sowley, the allocation of $477,000 to expand the Kenyasi Small Town Water System into what is now known as the Kenyasi Water Project to meet the ever-increasing needs of the residents, explained the partnership that Newmont had with the District Assembly.

He emphasised that the partnership fell in line with Ghana's Millennium Development Goal 7 to halve the proportion of persons without access to safe drinking water by 2015.

Mr. Sowley indicated that as a result of the expansion, the Kenyasi Water System is expected to pump about 25.2m3 of water, thereby providing a more reliable, safe, adequate and sustainable water for the people.

He disclosed further that the expansion and integration of the system commenced during the first quarter of 2010, with major activities carried out which included the drilling of a new 200 metres deep borehole, installation of a new submersible pump, installation of electrical panels, fixing of booster pumps, and fencing of both old and newly drilled wells, pump house, main reservoirs and booster station.

He, however, indicated that various capacity building programmes outlined in the Kenyasi Water Project (KWP) Community Development Strategy were currently being implemented.

The General Manager of Newmont's Ahafo Environment and Social Responsibility Department encouraged the District Assembly and residents to fully cooperate in maintaining the facility for the benefit of all, and eschew the thought that it was Newmont's project, and therefore, it was the company's business to maintain it.

'It should be the collective business of the District Assembly, Water and Sanitation Board, residents and all other stakeholders, to see to the continuous maintenance of the facility,' Mr. Sowley added.

Newmont, in addition to the handing-over of the expanded water project to the community, donated GH¢15,000 in addition to three motorbikes, five bicycles and other logistics to support the Water Board run the scheme effectively.

The acting Regional Director of Community Water and Sanitation, Engineer Divine Dugbartey, reiterated that the project belonged to the Asutifi District Assembly and not the Water Board, explaining that the Board would ensure the operation and maintenance of the project for its sustainability.

He advised that the Water and Sanitation team members should have the active participation of women, whilst urging the residents of the community to have proper sanitation, by ensuring private latrines in every individual's home.

Ing. Dugbartey stressed the need for the Water and Sanitation Board to ensure an effective overall administration of the water project to ensure its sustainability.

Terrorism: Be quick to report any suspicious persons or pack...
12 minutes ago