James Bond, 007 -- And How the Gold Standard Got Contaminated 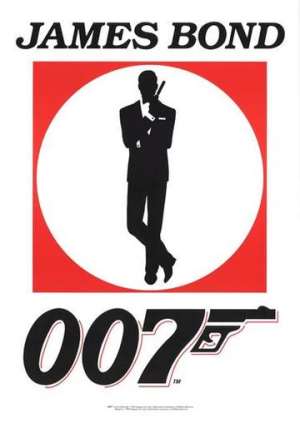 Bond: Yes, well, I've worked out a few statistics of my own. 15 billion dollars in gold bullion weighs 10,500 tons. Sixty men would take twelve days to load it onto 200 trucks. Now, at the most, you're going to have two hours before the Army, Navy, Air Force, and Marines move in and make you put it back.

Goldfinger: Who mentioned anything about removing it?

[Bond is stunned into silence]
Goldfinger: The julep tart enough for you?
Bond: You plan to break into the world's largest bank, but not to steal anything. Why?

Goldfinger: Go on, Mr. Bond.
Bond: [thinking] Mr. Ling, the Red Chinese at the factory, he's a specialist in nuclear fission… but of course! His government's given you a bomb.

Goldfinger: I prefer to call it an “atomic device.” It's small, but particularly dirty.

Bond: A dirty bomb? Cobalt and iodine?
Goldfinger: Precisely.
Bond: Well, if you explode it in Fort Knox, the… the entire gold supply of the United States would be radioactive for… fifty-seven years.

Goldfinger: Fifty-eight, to be exact.
Bond: I apologize, Goldfinger. It's an inspired deal! They get what they want, economic chaos in the West. And the value of your gold increases many times.

Goldfinger: I conservatively estimate, ten times.
Bond: Brilliant.
Goldfinger is a superb metaphor for what really occurred to contaminate the gold standard's reputation, keeping it off the policy table for 80 years — longer than even Goldfinger's ambitions. The contaminating events produced an intellectual trauma that brings economists such as Obama adviser Austan Goolsbee to tweet such nonsensical doggerel as “Roses are red. Violets are pink. Don't listen to goldbugs. No one cares what they think.”

Goolsbee, along with dogmatic reactionaries such as Paul Krugman, studiously ignore the implications of the utterly damning critique of the fiduciary currency system by The Bank of England last December in its paper titled Reform of the International Financial System. Meanwhile, outside the self-referential Cult of Neo-Keynesianism, in the past two years a dramatic shift in the international elite opinion stream is bringing the gold option back into consideration.

From Latin America, Manuel Hinds, twice Finance Minister of El Salvador, is on record in The Wall Street Journal advocating the classical gold standard. The “Sage of Mexico,” Hugo Salinas-Price, has kept the torch lit both for gold and silver at Plata.com to increasing worldwide respectful attention. Three weeks ago this column noted an elegant work extolling the gold standard emerging from Chile, Axel Kaiser's Intervention and Misery: 1929-2008.

Emerging from Europe, two weeks ago a column in this space delineated how the Deutsche Bank and the Bundesbank have come to the fore in rehabilitating gold's reputation. Emerging from Asia, last week this column reprised handsome praise for the gold standard from one of China's most respected and influential monetary authorities.

Since then, from the world's largest democracy, India's leading advocate of monetary integrity, S.S. Tarapore, former deputy governor of the Reserve Bank of India (and chairman of the iconic Tarapore Committee which, during his tenure, laid the roadmap for India's capital account convertibility) published a significant piece in The Hindu Business Line entitled High Time RBI bought more gold, reprising some of the evidence of the rehabilitation of gold as the appropriate reserve asset for central banks and urging its bulk acquisition by the RBI.

Meanwhile, with worldwide implications, Basel III, supported by the Federal Reserve and the FDIC, moves gold to a Tier I asset. As the influential Daily Reckoning from Agora Capital put it, in a remarkable essay by analyst Doug Hornig entitled Gold Just Became Money Again, recently:

On June 18, the Federal Reserve and FDIC circulated a letter to banks that proposes to harmonize US regulatory capital rules with Basel III.

BASEL III is an accord that tells a bank how much capital it must hold to safeguard its solvency and overall economic stability.

…
Here's the important bit:
At the top of the proposed changes is the new list of “zero-percent risk weighted items,” which now includes “gold bullion,” right after “cash.”

…
In addition, this vote of confidence from the highest monetary authorities gives further impetus to the remonetization of gold.

Back in the good old USA, the Republican Party, with a dramatic nod to the gold standard, adopted a platform plank calling for a monetary reform commission, with a broad nod to gold, causing a worldwide buzz. The Chairman of the Republican Study Committee, Rep. Jim Jordan, already had been calling for monetary reform as one of his five major economic growth planks. The Vice Chairman of the Joint Economic Committee, Rep. Kevin Brady, is readying his Sound Dollar Act, redirecting the Fed from its discretionary activism — not calling for the gold standard but with a heavy deference to the price of gold — for a fast start in the next Congress.

To better comprehend this worldwide reputational rehabilitation it is useful briefly to understand the circumstances in which the gold standard's good name originally became contaminated. What was the original “Operation Grand Slam,” as it were? As it happens gold was, as they say in detective stories, “framed” for a crime it did not commit.

The crime: The Great Depression. The Depression was the most traumatic event in modern economic history. The gold standard, which had been out of commission for over a decade before Black Monday hit, got blamed. How? According to France's great monetary statesman Jacques Rueff the panic and Depression occurred because the gold standard had been replaced by its grotesque caricature, the “gold-exchange” standard, which Rueff characterized as “an unbelievable collective mistake which, when people become aware of it, will be viewed by history as an object of astonishment and scandal.”

But the intellectual distinction between the true gold standard and its, well, Evil Twin had been lost. The gold standard took the fall. That planted the seed of the “unbelievable collective mistake” that caused the gold standard to move from being recognized as an elegant policy tool to what Keynes termed a “barbarous relic.” Keynes's indictment, written in 1923 right after official adoption of the first gold-exchange standard, was, of course, correct. But only under the peculiar circumstances of this “object of astonishment and scandal.”

The popular (and elite) confusion, and misattribution, was compounded by FDR's confiscation, and prohibition of the ownership of gold in 1933. Gold remained a contraband substance until the prohibition was lifted in 1974. That prohibition gave gold's reputation a somewhat sinister aspect from which it only now is emerging fully.

Alison Fraser, head of the Economic Policy Studies department at Heritage Foundation, referenced, to the Washington Post, a “hardy band” of gold standard advocates active during the long period where gold's reputation was contaminated. Prominent among these are the great Reagan Gold Commissioners Rep. Ron Paul, the eminence grise of the Austrian gold standard, and Lewis E. Lehrman (whose Institute this columnist professionally advises), the eminence grise of the principled American gold standard.

The “hardy band” is beginning to get a lot of new, elite, recruits. “Operation Reverse Grand Slam” — the decontamination of gold — is advancing, both domestically and internationally, at a dizzying rate. The hardy band of gold standard advocates appear on the verge of epitomizing anthropologist Margaret Mead's famous observation, “Never doubt that a small group of thoughtful, committed citizens can change the world. Indeed, it is the only thing that ever has.”

The julep tart enough for you, Mr. Bond?