Dos Santos tipped to win as Angola heads to polls 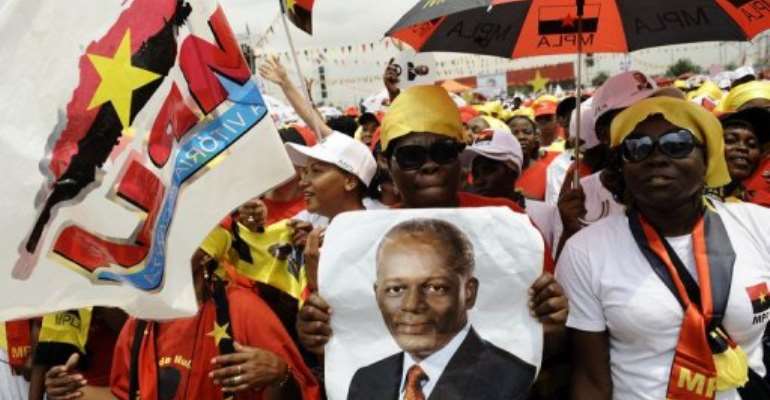 The People's Movement for the Liberation of Angola took over 80% of the vote in the last elections. By Stephane de Sakutin (AFP)

LUANDA (AFP) - Angolans head to the polls Friday for the second elections since the end of their 27-year civil war, with President Jose Eduardo dos Santos expected to extend his grip on power despite a revitalised opposition.

Friday was declared a national holiday for the 9.7 million registered voters to visit the more than 10,000 polling stations at schools across a country twice the size of France.

Initial results are expected within a day, with final returns some time next week.

Angolans will cast ballots for parliamentarians, with the leader of the winning party becoming president.

The ruling People's Movement for the Liberation of Angola, in power since independence from Portugal in 1975, took more than 80 percent of the vote in the last elections four years ago and is expected to win comfortably again.

For the main opposition Union for the Total Independence of Angola (Unita), which won only 10 percent of the vote last time around, the elections are a chance to prove that the former rebellion is still relevant to national politics.

Party leader Isaias Samakuva has already raised concerns about the authenticity of the voter roll, in a campaign that has centred on calls for greater democracy and transparency in government.

But earlier this year Unita splintered, with the charismatic Abel Chivukuvuku forming the Casa party in April, along with a top-level defector from the MPLA, smaller opposition groups and prominent members of civil society.

He has made inroads by actively courting the youth vote with promises of better jobs and housing, seeking to harness the frustrations of the youth in a country where more than half the population is under 18.

In the decade since Angola's war ended, the oil-powered economy become one of the fastest-growing in the world, showering the elite with fabulous riches while 55 percent of the population live in abject poverty, according to UN data.