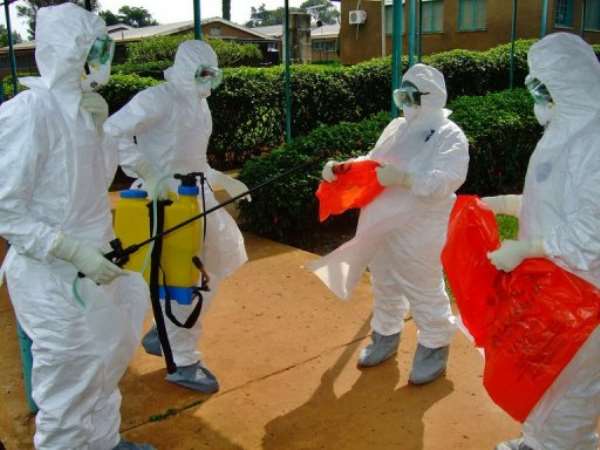 KAMPALA (AFP) - Kampala residents have been urged to avoid contact after the deadly Ebola virus hit the city but security guard Joseph Karuba's job is to frisk people and he doesn't have gloves.

"The thing has come back -- it came first time and we beat it, then it came again and we beat it and now it is back," he said, waiting for shoppers outside one of the teeming capital's malls.

President Yoweri Museveni on Monday confirmed that Ebola, one of the world's most virulent diseases, had reached Kampala for the first time following an outbreak in the west of the country.

"We shall request gloves, but for now it is a very big problem because we are exposed," Karuba said.

Officials were searching for anyone who might have come into contact with the virus, amid public warnings for people to take precautions and avoid physical contact.

"Ebola outbreak! What you need to know," screamed a headline in the daily New Vision newspaper.

In Kampala -- a chaotic city of around 1.5 million people with densely populated slums and bustling markets -- the message of caution appears to be getting through to the public.

"They are telling us about it over the radio," says Boniface Ongwang, a motorcycle taxi driver.

"You are not supposed to touch others or drink local water. In public places don't hold someone's hand, just wave at them."

Ongwang, 28, says that for the moment he is confident that Kampala remains more or less safe, but he has told his wife to keep his baby daughter at home.

"If you do not have to, there is no need to move around in busy places," he said.

Residents said they would feel more secure if they were able to avoid taking the crowded and dilapidated minibuses that zoom around town but many do not have a choice.

"If I could I would avoid taking public transport," 35-year-old Wangalwa Ojambo told AFP while waiting at a bus stop on the outskirts of the city.

Some businesses have warned staff to take precautions.

"We have done a poster for staff warning them to be vigilant and to avoid contact with people, but we cannot tell them to stop taking money or doing business," said Vincent Kimbya, a supermarket manager in central Kampala, as shoppers queued up to buy goods.

The latest Ebola outbreak started in early July in Uganda's western Kibale district, some 200 kilometres (120 miles) from Kampala, and around 50 kilometres from the border with Democratic Republic of Congo.

A health worker from western Uganda fell sick and travelled to Kampala, later dying in hospital in the capital, prompting fears the virus could have spread.

Museveni on Monday warned people to avoid physical contact -- ranging from shaking hands and kissing to sex and funeral ceremonies.

Ebola, which can cause both internal and external bleeding, spreads by direct contact with the blood or other body fluids of infected persons, according to the World Health Organisation.

As yet no one is reported to have contracted the virus in Kampala.

Medical workers who came into contact with the victim are under surveillance, and the city's main hospital is setting up an isolation camp in case of more cases.

The rare haemorrhagic disease, named after a small river in DR Congo, killed 37 people in western Uganda in 2007 and at least 170 in the north of the country in 2000.

The nearest death to the capital previously had been in May 2011 in Bombo, 35 kilometres from Kampala.