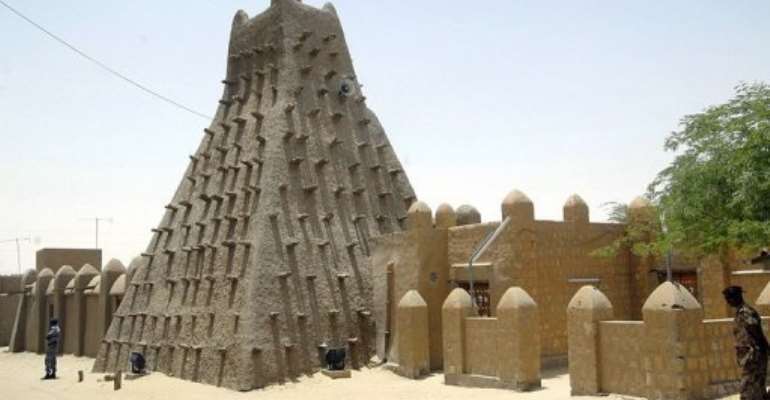 Timbuktu was recently listed as an endangered world heritage site because of the unrest sweeping through Mali. By Habib Kouyate (AFP/File)

The onslaught by armed militants from the fundamentalist Ansar Dine was launched amid the unrest in Mali's vast desert north that erupted in the chaotic aftermath of a March 22 coup in Bamako.

"They have raped Timbuktu today. It is a crime," said a source close to a local imam in Timbuktu, known as the "City of 333 Saints".

"The tombs of Sidi Mahmoud, Sidi Moctar and Alpha Moya in Timbuktu were destroyed Saturday by the Islamists... who are heading towards other tombs," said one witness, whose report was confirmed by the source close to the imam.

In addition to three historic mosques, Timbuktu is home to 16 cemeteries and mausoleums, according to the UNESCO website.

"This is tragic news for us all," Alissandra Cummins, chair of UNESCO's executive committee, said in a statement to AFP in Russia, where the body is meeting this week, describing the attacks as "wanton damage".

"I appeal to all those engaged in the conflict in Timbuktu to exercise their responsibility -- for the sake of future generations, spare the legacy of their past," she pleaded.

Ansar Dine, one of the armed Islamist groups which has seized control in northern Mali, has said no site would be safe in Timbuktu.

"Ansar Dine will today destroy every mausoleum in the city. All of them, without exception," spokesman Sanda Ould Boumama told AFP through an interpreter from the city.

The Ansar Dine spokesman suggested Saturday's action was in retaliation for the UNESCO decision on Thursday to put the World Heritage site, a cradle of Islamic learning founded in the fifth century, on its endangered list.

"God is unique. All of this is haram (or forbidden in Islam). We are all Muslims. UNESCO is what?" he said, declaring that Ansar Dine -- which wants to impose sharia law in the region -- was acting "in the name of God."

Witnesses in Timbuktu said the gangs had destroyed the mausoleum of a saint whose 15th century tomb was already desecrated in May by members of Al-Qaeda in the Islamic Magreb (AQIM), another of the groups in control in the north.

The destruction in Mali is reminiscent of the Taliban blowing up the giant Buddhas of the Bamiyan valley in Afghanistan -- an ancient Buddhist and world heritage site on the Silk Road -- in March 2001 after branding them un-Islamic.

UNESCO said its decision to place both the town and the nearby Tomb of Askia in Gao on its List of World Heritage in Danger "aims to raise cooperation and support for the sites threatened by the armed conflict in the region."

Mali has been gripped by chaos since disgruntled troops swarmed the capital Bamako in the south in March and ousted the elected president of what had been seen as one of Africa's model democracies.

Islamist and tribal Tuareg groups seized on the power vacuum and pushed government forces out of northern Mali, an area the size of France and Belgium, including Timbuktu and the cities of Gao and Kidal.

Mali's neighbours in west Africa have held several crisis meetings on the situation.

But on Friday, another Islamist militant group in the lawless north, the Movement for Oneness and Jihad in West Africa (MUJAO), threatened any countries which join a military intervention force to end the crisis.

UNESCO, the world's main watchdog over protecting some of history's greatest treasures and most threatened cultural exhibits, first designated Timbuktu a heritage site in 1988.

Besides its monuments, the city houses nearly 100,000 ancient manuscripts, some dating back to the 12th century, preserved in family homes and private libraries under the care of religious scholars.

At its height in the 1500s, the city, a Niger River port at the edge of the Sahara 1,000 kilometres (600 miles) north of Bamako, was the key intersection for salt traders travelling from the north and gold traders from the south.