S.Africa hailed for 'Made in Palestinian Territories' tags 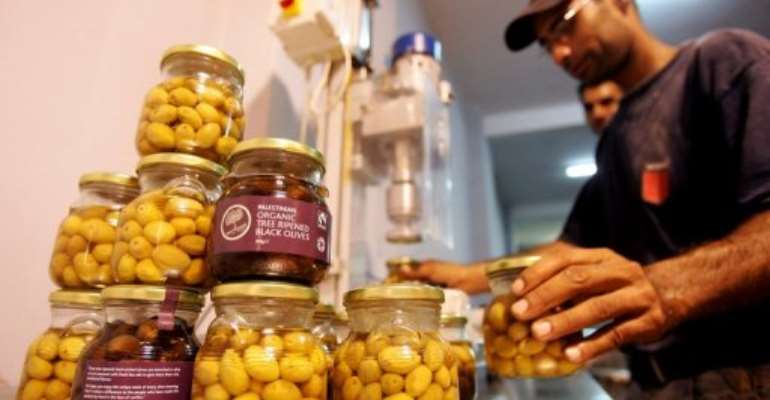 A Palestinian man organizes jars of olives grown in the West Bank. By Saif Dahlah (AFP/File)

WINDHOEK (AFP) - A top Palestinian government official on Friday praised South Africa's plans to stick "Made in the Palestinian Territories" labels on goods from the area.

"We welcome South Africa's stand to plan labelling products from the area with 'Made in the Palestinian Territories' labels," said agriculture minister Walid Assaf during a visit to neighbouring Namibia.

South Africa wants to introduce the tags for goods to distinguish them from those identified as "Made in Israel" and will make a decision after a public consultation process that ends on July 10.

"Israeli agricultural produce should be boycotted as they are illegally and cheaply produced on stolen Palestinian land with stolen water of Palestine," said Assaf.

South Africa, the continent's economic powerhouse, on Friday again defended its plan after marches in Pretoria and Cape Town slamming the move.

The Department of Trade and Industry argues the plan aims to make a clear distinction between products from within the internationally recognised borders of Israel and those made in Jewish settlements within the occupied territories.

It "is not about government calling for a boycott against Israel, but ensuring that consumers in South Africa are provided accurate country of origin information so that they can exercise their own informed choice," it said.

Consumer law necessitated information on where a product came from, it added.

Assaf, on a two-day trip to Namibia to discuss technical cooperation, also signed a memorandum of understanding with his Namibian counterpart John Mutorwa.

"Namibia supports the just cause of the Palestinian people and their right to nationhood," Mutorwa said at the signing ceremony. "We support a Palestinian state living side-by-side with Israel in peace and harmony."