The Lauzen Plan: How to Rein In a $3 Trillion Rogue Pension Elephant 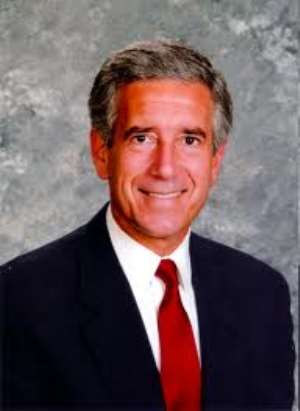 The daylight at the end of our tunnel also points a way for Europe to emerge from its own fiscal trauma. America has its own version of the eurozone crisis going on. A number of states rapidly are approaching insolvency. Illinois might be our very own Greece.

The Illinois state government is staggering under $83 billion in unfunded pension liabilities. Illinois holds the position of Pluto in the solar system of red ink graphed out by Illinois state senator Chris Lauzen and shared with legislators assembled at the American Legislative Exchange Council last year. According to Lauzen, Illinois has more than four times the combined general obligation debt + underfunded pension liabilities compared to its state general revenues.

Yet Illinois might help lead the way out. Why Illinois? As economist Herb Stein once observed, “If something cannot go on forever, it will stop.” Illinois is at the end of its rope. It has raised its income tax rates as high as they can go. The tax structure now is driving out two residents for every new one who moves in, earning the taunt “Land of Leavin'.” It has cut spending on essential government services. Now … it must confront the $83 billion rogue elephant in the room.

In Hunter Thompson's immortal words, When the going gets weird, the weird turn pro. Illinois's legislators have taken “the weird turn pro” to heart. Illinois's lurch toward solvency recently crept in on miniature horses' hooves. The Illinois state legislature had positioned public employee pension reform as a centerpiece 2012 legislative issue. Then, instead, it spent the waning hours enacting legislation … to allow the disabled to use miniature horses as service animals.

What was really going on? The elite state politicos (Democrats, alas) wished to dodge the job of restoring solvency by responsibly reducing unsustainable obligations. Instead, there was a sneaky plan to fob the state's staggering costs off on the local governments — and, thus, onto the property taxpayers — deflecting blame from state to local officials.

So, so to speak, a miniature Cavalry rode to the rescue of the citizens of the, too-aptly nicknamed, Sucker State. The session closed with miniature horses being elected service animals and without the people of Illinois being nefariously saddled with the pension obligations. “I think it was Churchill who said that the Americans always end up doing the right thing after they've tried every other alternative,” President Obama recently observed (in another context). Illinois, having tried all else, may be ready to do the right thing!

There is a simple, humane and practical solution to Illinois's threatening insolvency: the “Lauzen Plan.” If tried successfully and emulated it promises to staunch the red ink threatening the viability of many states and municipalities. Lauzen is leaving the state Senate, after 20 years of service there, where he, together with other legislators of integrity, consistently predicted, and tirelessly formulated solutions to, the cascading fiscal catastrophe now manifesting. The officials blithely ignored or aborted the solutions.

Lauzen holds both a CPA and a Harvard MBA. He operates with a much higher degree of financial sophistication than most legislators. He tired of playing Cassandra (the princess with the gift of prophecy cursed never to be believed). So he recently has taken the nomination to become county board chairman of the half-million population Kane County. There, if elected as expected, he will have the power actually not simply to prophesize but to put credible reforms into place. Meanwhile, his Plan holds promise.

The Lauzen Plan shows how working from fundamental American principles can work to solve big problems. It is founded on dealing honestly with the numbers, dealing fairly with their implications, and relying on good small “r” republican officials to do the right thing between the contending stakeholders.

It turns out the apparently daunting problem of unfunded pension liabilities is tractable. The solution won't require a bailout. It doesn't ask the bondholders to take a haircut. It balances the interests of the lenders, the taxpayers, the recipients of government services, and the state employees.

Its first component is the easiest: staunching the abuses of the system. A minority of government employees are gaming the system and retire at a preposterously young age with obscenely high pension benefits — sometimes well over $100,000 a year. They do this with devices such as overtime. Allowing such abuses badly undermines the integrity of, and public support for, the retirement system. Moreover, it sullies the reputations of other, innocent, retirees.

Once the gaming is forbidden, two larger steps are required. Raise the age of pension eligibility to 62, the age of early retirement under social security, an earlier age than that which most of us get to retire. Raising the retirement age will require a recalibration of state workers' expectations. Lauzen reports that many, perhaps most, state workers to whom he proposed this are not thrilled but recognize it to be an equitable recalibration of unsustainable overpromises. It provides for a very decent retirement and is not an outrageous price to pay for restoring security to their retirement plan. Lauzen further defuses grounds for recrimination with a grandfather clause and a transition period.

The final step? A “1% solution.” There is a cost of living adjustment, COLA, of 3% a year built into the system. Reducing the COLA to 2% a year is sufficient to close the remaining gap. Einstein, according to legend, said that the strongest force in the universe is compound interest. A 1% adjustment, according to Lauzen, is strong enough to pull Illinois back from the edge of the precipice and push it into solvency. While it is not a trivial concession from beneficiaries it is not onerous.

The Lauzen Plan — capping abuses, raising the age of benefits eligibility to a normal retirement age, and reducing the COLA by 1% — would rescue Illinois, he states, from the insolvency threatened by its $83 billion unfunded liability. Would other reforms, such as a migration to a defined contribution plan like the private sector and the federal government use, be beneficial? Should the ultimate resolution perhaps call for greater worker concessions to permit the reduction of tax rates to prevent Illinois from turning into a ghost state? This columnist believes yes. But if the Lauzen Plan works as expected it assuredly points to a decent path to safety. It would set an example for other states. And its principles might even be adaptable to Greece, Italy, Portugal, and Spain.

“If something cannot go on forever, it will stop.” America has decided: time to rein in the rogue elephant, unfunded pension liabilities, in the room. Scott Walker is vindicated. San Diego and San Jose pull the emergency cord. Next, something like the Lauzen Plan provides a clear map out from under the $3 trillion debacle.