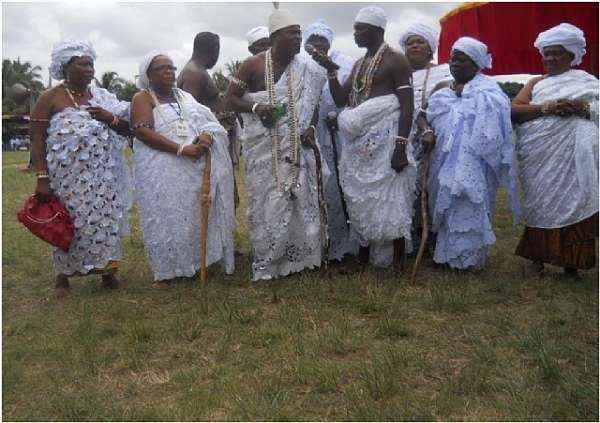 Nogokpo (V/R) GNA - , May 27, GNA - The Afrikania Mission at the weekend celebrated “Victory of Truth over falsehood,” festival at Nogokpo in the Volta Region, urging the international community to ignore the smear campaign against the 'Trokosi' system.

The festival, which was under the Chairmanship of Torgbui Hor III, Paramount Chief of Klikor was jointly organised by the Afrikania Mission and the Troxovi Institutional Council, an umbrella body of Troxovi Shrines.

It was attended by more than 100 adherents of the African Traditional faith from Benin and Togo in solidarity with their Ghanaian neighbours.

The event was organised in reaction to claims by some NGOs that there were shrines in Ghana especially among the Ewes, and some parts of the Greater Accra and Eastern Regions where girls and women were enslaved in what were derogated as Trokosi Shrines.

According to the reports, these “slaves” were subjected to degrading and dehumanising treatments, including kidnapping, forced detention, flogging, scarification, physical mutilation, rape and other sexual offences.

Professor Kwakuvi Azazu, High Priest of the Mission and Lecturer at the University of Education, Winneba said the reports were so horrifying that the Mission appointed a committee to investigate the claims made by the Trokosi Liberating Christian NGO's.

He alleged that International Needs, Ghana, led by Reverend Walter Pimpong and other Christian NGOs were the brains behind the publications.

Prof Azasu said the festival was organised in the wake of the Mission's own investigations as well as the reports by independent sources, including two American citizens, Dana Romanoff and Julie Jenkings who found out that the publications were not true.

This was after the team had investigated the Troxovi Institutions for many months and wrote comprehensive reports, which discredited the claims of the Trokosi Liberation NGOs.

The Committee started work in 1998 and completed their findings within 21 days having visited more than 43 shrines.

The report was made available to the public and circulated to the media and almost all the diplomatic missions in Ghana and stakeholders of issues affecting women.

Prof Azazu asked the NGO's to apologise for deceiving Ghanaians and the international community and tarnishing the image of the country globally through their negative reports.

“We call on the government to ensure that the NGOs apologise to the Troxovi Institutional Council for slandering and libelling its members collectively and individually.”

The Mission also asked the government to investigate the issue.

The report stated that there were no shrines called Trokosi Shrines in Ghana but Troxovi Shrines which belong to communities and not to individuals.

The Troxovi Shrines were a complex of many institutions including healing centres, pharmacies, places of devotional service, refuge sanctuaries, schools, conservatories of culture and morality, lodges of esoteric knowledge and courts for the administration of justice.

The report discovered that, 80 years ago, Troxovi Shrines were serving as banking institutions in some communities in the Volta Region.

It stated that there were no slaves in the shrines but rather Fiasidi (chosen ones) who receive training and are not mistreated but revered both individually and collectively as the most traditionally educated people in Southern Ewe culture.

“The US Embassy, through which some funding was granted for liberation of Trokosis, also appointed its own investigative committee, which discovered that claims of the Trokosi Liberating NGOs were false and self-serving,” Prof Azasu noted.

Awoamefia Torgbui Sri III of Anlo, who was the Guest of Honour, affirmed his belief in the practice of traditional religious faith and spirituality, saying “those often described as Trokosis are not slaves but people trained and educated in the traditional values and practices of our forebears”.

Torgbui Sri asked the revellers to be steadfast with their indigenous cultural practices and not be swayed by foreign religious practices “because Anlo was built on culture and tradition without which Anlo will cease to exist”.

“If any believer of foreign religion should tell you to forsake your African traditional religion because it is not good, that person is deceiving you. The only demand I make is that we must ensure that we ourselves are above reproach and serve as examples for adherents of other faith.”

Torgbui Sabah IV, Chief of Nogokpo and host of the festival, said the object of the celebration was to let Ghanaians and the whole world to know the truth, adding: “We Africans must cherish our African heritage and identity.”

He abhorred the vilification of African traditional religion and culture by adherents of foreign religious faiths.

Nii Mantchee, Chief of Anechor in Togo who led the delegation from his country poured libation, asking for forgiveness of sins, peace, health and prosperity for all.

He said: “Any country that has no culture and spirituality is dead,” and expressed the solidarity of his people for the practice of African traditional religion.

Osofo Atsu Kove, Head of Afrikania Mission recalled the tireless efforts of his predecessor Osofo Komfo Kofi Ameve in fighting the falsehood against the Troxovi shrines and expressed regret that he was not around to celebrate the victory of truth over falsehood.

Torgbui Sewor IV, Chief of Agavedzi, who represented Torgbui Hor II, as the Chairman for the celebration, reminded adherents of the onerous duty not to abuse the powers granted them as a result of their faith and beliefs.

“The course of spirituality charted by our forebears must never be used for evil, lies, wicked practices and for fraudulent purposes. Everyone one of us is imbued with the power to perform wonders if only you know how and if you know yourself,” he added.

A side-line of the festival included display of mystical powers and healing.