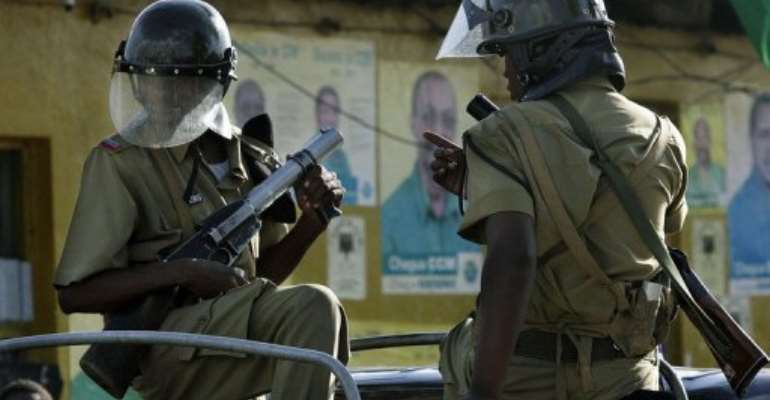 Tanzianian police patrol the streets of Mwembe Makumbi after violent protests across Zanzibar in 2005. By Marco Longari (AFP/File)

STONE TOWN, Zanzibar (AFP) - Police on Tanzania's archipelago of Zanzibar appealed for calm Sunday after violent clashes with protesters calling for the independence of the islands left several injured.

"We are trying to maintain peace and restore calm," said Zanzibar police commissioner Mussa Ali Mussa, who said a demonstration by an Islamic group called Uamsho had turned violent on Saturday.

Rioters threw stones as police fired tear gas and water cannons in Stone Town, the capital of the semi-autonomous Tanzanian archipelago. Small groups of protesters were still on the streets on Sunday.

Uamsho, which claims to safeguard Islamic customs on the majority-Muslim island, had been holding demonstrations demanding for an end to the union with mainland Tanzania.

Uamsho's supporters clashed with police on Saturday after they marched on a police station following the arrest of one of their leaders.

Tourism is the main foreign currency earner for Zanzibar, famed for its white-sand beaches and historical buildings in Stone Town, listed as a world heritage site by the United Nations cultural agency UNESCO.